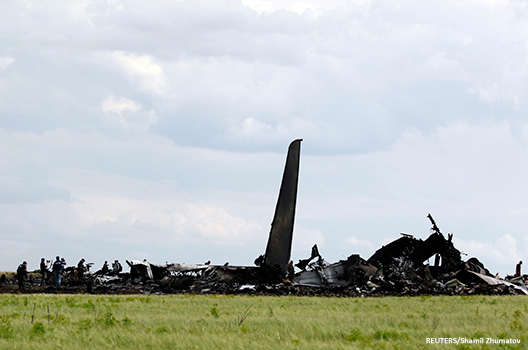 The anti-terrorist campaign is encircling Luhansk ever tighter. The number of people remaining in the city is growing smaller, and those that remain keenly feel the foreshadowing of certain battles to come, writes Luhansk native Valentyn Torba in a blog post for the Ukrainian daily newspaper Den. The tragedy of June 14 – when 49 Ukrainian servicemen died when pro-Russian militants shot down their military transport plane – has enraged the soldiers, and rage in wartime is often a decisive factor, Torba writes.

“As I was writing this blog on June 15, explosions rang through Luhansk from the direction of Stanycia Luhanska [an agricultural town of some 15,000 located 24 kilometers from the state capital of Luhansk]. Reports said that some 15 large-scale artillery explosions shook the town of Makarove. The terrorists blew up a pedestrian bridge in Makarove in the morning, thereby blocking the highway to Luhansk.”

As the separatist movement, fueled by aggressive Russian television programming, unfolded in eastern Ukraine, many locals supported the militants. They blocked Ukrainian military vehicles, disarmed soldiers and supplied the militants with food and drink.

Those sympathies are now gone, Torba writes. “The frightened residents of Stanycia, many of whom have fled the areas where fighting is taking place, are no longer trying to stop the Ukrainian army. After the bacchanalia of the pro-Russian separatists and with the Ukrainian military drawing close, no one is up for this kind of ‘heroism’ any longer.”

Valentyn Torba is not a journalist, as he himself writes on his business portal, “The Golden Pages of Luhansk.” But he is an observer of human activity and a good storyteller. His descriptions of life under siege have been published in several Ukrainian newspapers and on many websites.

Torba’s descriptions of the layout of the land have an aura of strategy and tactic. The road to Luhansk from the southeast is open to the Ukrainian army. The terrorists know this, and are strengthening their position in the city, he writes: “They have seized two Eastern Ukrainian University dormitories, buildings that have direct views of the eastern side of the city. They have also taken over the city’s gas utility and set up a machine gun on the roof. They’re taking positions in residential areas among houses and setting up anti-aircraft guns in ravines along the southwestern part of the city.”

The Ukrainian flag is once again flying over the town of Shchastia, a suburban extension of Luhansk, Torba continues. Ironically the word “shchastia” literally means happiness in both Ukrainian and in Russian – something the local residents have very little of these days. “But they are relieved to be under Ukrainian control again,” he writes.

Despite reports of ferocious battles, the town of Shchastia has been spared the worst. There have been explosions and shooting, but minimal bloodshed. The leader of the militants – “Batya,” whom Torba remembers actively recruiting locals to join the separatist cause earlier in March – surrendered to the Ukrainian military together with his gang without significant resistance.

There are conflicting reports about the Luhansk suburb of Metalist, Torba continues. This elite part of the city with sweeping views of the region is strategically laid out on a picturesque hill, and is the chosen spot for the Luhansk political elite. The highland is peppered with their palaces and mansions, and a running joke in Luhansk is that these palaces might be the next base for the Ukrainian army.

Like nearly everyone in Ukrainian media these days, Valentyn Torba refers to the separatists as bandits or terrorists. “As of noon today [June 15] the bandits are blocked to the north and northeast,” he writes. “Access through the west and southwest remains open, and these are the directions from which the militants are getting their support. These are the lifelines of the separatist insurrection through which reinforcements from Russia are funneled.”

Torba is sober and realistic about the complex situation the Ukrainian military faces in dealing with an enemy that has taken cover in civilian residences in urban centers. Victories such as the recent retaking Mariupol, a port city on the Azov sea are important, but “it is too early to talk about a strategic advantage for the Ukrainian military,” he warns.

At the same time, this Luhansk observer seems to think the tide is turning ever so slowly against the separatists. “You can sense panic in their ranks and their hope that Russia will help them is fading,” he writes. Many militants are shedding their camouflage gear and resorting to civilian clothing to blend in with the locals. Two buses with such civilians returned to Russia yesterday, Torba reports.
One glimmer of hope in Luhansk is the release of Temur Yuldashev, a Luhansk native who organized a volunteer battalion to fight the separatists. Yuldashev was captured by the militants in April and kept in the basement of the Ukrainian Security Service (SBU) building for nearly two months. Seized on April 7, this building is now the central command of the main Luhansk separatist group.

Oleksander Reshetniak was not so lucky. The Luhansk activist had wanted to leave the city but was hindered by a broken leg. He was kidnapped by the separatists on June 10 and tortured for two days. Doctors valiantly fought for his life for three days, but were unable to save him – he suffered from a broken pelvis, shattered spine, ruptured kidneys and a penetrating gunshot wound to his abdomen.

“He was one of our own,” Torba writes. “A Luhansk native, he loved his family, Ukraine, and he loved fishing. A simple Ukrainian, whose life was taken from him by these pro-Russian fiends.”