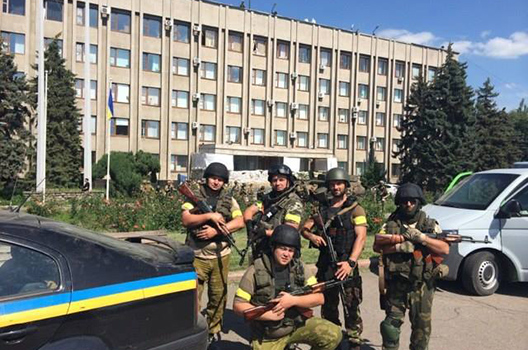 Yevhen Shybalov is the Donetsk province correspondent for Dzerkalo Tizhnya (The Weekly Mirror), one of Ukraine’s most prominent newspapers. Shybalov has been driving the increasingly cratered roads of his home region to record what the past four months have brought.

Last week, Shybalov reached the shattered city of Slaviansk, which had been a military headquarters of the Russian-sponsored militias until Ukraine’s government re-captured it one month ago. About seventeen miles northeast of Slaviansk, just beyond the recent months’ fighting, is the town of Krasnyi Lyman. Because it’s still intact, thousands of people from Slaviansk and other war zones have fled there.

For three children from Slaviansk, it is that and more. The Russian-fueled separatist war in eastern Ukraine took their parents and left them orphaned.

As he bent down to untie his shoelaces so he could remove his shoes, which are not allowed inside the Children’s Rehabilitation Center in Krasnyi Lyman, Shybalov felt something hit him softly in the small of his back.

He turned to find a flaxen-haired boy of about two staring at him apprehensively, frozen in place, waiting for his reaction. The stuffed animal he had tossed at Shybalov was lying on the floor in front of him.

Shybalov smiled at him. The boy continued staring silently for a few moments, fear flickering in his eyes. Suddenly he turned and scuttled to seek shelter between two little girls sitting on a couch nearby. From that perch he continued staring at Shybalov with mistrust.

Eleven-year-old Valeria, four-year-old Viktoria, and their twenty-month-old brother Nazar Shemihon are from the village of Shchurovo. Refugees from around Slaviansk were moved to Shchurovo, as it was considered safe.  Unexpectedly, it, too, was shelled. A bomb hit their family home. Nazar was slightly wounded. The children’s parents were killed.

Psychologists at the Krasnyi Lyman orphanage haven’t had to explain war to children until now. Their usual cases are children from broken homes, so-called social orphans. Some are given up by parents too poor to raise them. Other kids come after social services take them into custody because of parental neglect, drug abuse or alcoholism.

“We get children who have really lived through hell at home,” said Olena Sumchenko, the center’s resident psychologist. “But this was a wonderful, happy family and suddenly these children lost both their parents. Its most difficult for Nazar; he’s still so little.”

As a rule the psychologists at the center encourage the children to speak their fears and hurts. Valeria and Viktoria can do that, formulating and expressing their emotions. But Nazar is too young for such talk. He only shouts and cries. And calls for his mother.

If there is some ray of sunshine in the children’s story, it is that they have aunts and uncles who are busy processing documents and getting permission from local authorities to adopt the three so the siblings can stay together.