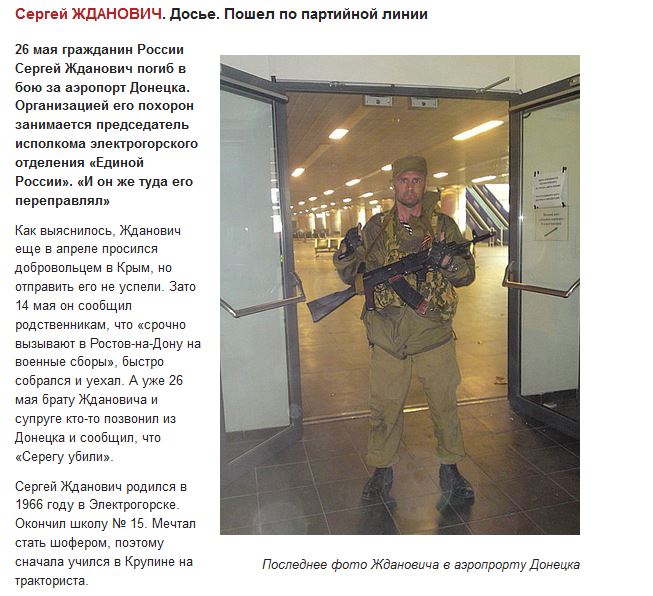 Novaya Gazeta reports that thirty of those killed were ethnic Russians, and the other a Chechen. At least three of the Russians have been buried without publicity in towns around Moscow, it says. One of them, Sergei Zhdanovich, was a military veteran of the Russian suppression of rebellion in Chechnya. In his hometown of Elektrogorsk, near Moscow, he was a active in the local chapters of a veterans’ organization, the Combat Brotherhood, and of United Russia, the political party that holds a majority in Russia’s Duma.

Zhdanovich’s name emerged last week in a report by Russian journalist Maria Turchenkova, who accompanied his body, among the total of thirty-one, as they were shipped back to Russia for burial.  Turchenkova reported postings in Russian social media saying Zhdanovich had been an instructor in special operations for the Federal Security Service (FSB). Novaya Gazeta quotes Zhdanovich’s brother as denying this, saying that Zhdanovich had worked with ordinary police, not the FSB secret police.

Novaya Gazeta says it has sent a formal inquiry to Russian state prosecutors asking for an investigation into how Russian citizens, including military veterans, are being recruited and sent into Ukraine to fight as part of the secessionist militias battling to separate Donetsk and Luhansk provinces from Ukraine.

Ekho Moskvy’s report, also available in Russian, is translated below:

A few days ago they were transported to Russia. The delivery of the bodies of Russian [fighters killed in eastern Ukraine] was covered by photojournalist Maria Turchenkova, who told that story in her article “Cargo 200.”

We note that the names of all of those killed in Donetsk are so far unknown, although several names have been mentioned on social media networks.

In social media, most references are about the 30 Russians killed in Ukraine. At least three of those are from the Moscow suburbs – aged from 20 to 48 years. In part, Russian special operations soldier Aleksei Yurin fought alongside the militias of the self-proclaimed Donetsk republic and died during the battle for the [Donetsk city] airport. His death was confirmed by Violetta Griboyedova on the social network site VKontakte. She writes that Yurin is a resident of Mozhaisk [about 60 miles west of Moscow].

Novaya Gazeta wrote earlier about the Russians killed in Donetsk. According to its information, no fewer than 30 Russians were killed in the battle for the airport [on May 26] while fighting on the side of the [Donetsk secessionist] militias. Novaya Gazeta sent an official inquiry to the Investigative Committee of the Prosecutor General’s Office, and to the Border Service of the FSB [Federal Security Service].  The newspaper calls for an investigation into the killing of the Russians and clarification of how and why they wound up in a combat zone in Ukraine.

Image: Novaya Gazeta's website published a story and photo it said is of Sergei Zhdanovich, a Russian army veteran who went to fight alongside Ukraine's separatists, and was recently buried in his hometown near Moscow. (www.novayagazeta.ru)