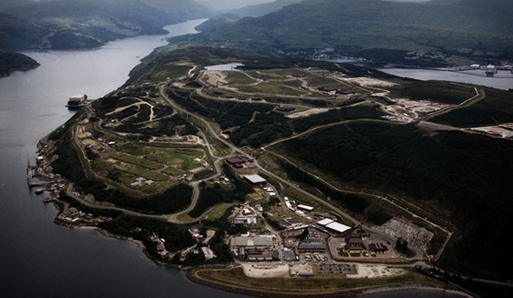 Scottish independence will be put to the vote soon, in the fall of 2014 if not before. A ‘yes’ vote, while not inevitable, is a genuine possibility. If the United Kingdom splits apart, what future will the remainder—a nameless rump inelegantly referred to as ‘rUK’—have on the international scene? This question demands urgent attention, not least because the political timetable may put the continued viability of Britain’s strategic deterrent in play.

All of the UK’s nuclear missiles are sea-launched Trident D5s; and all four of the Vanguard-class ballistic submarines capable of launching them are based in the Clyde estuary in the west of Scotland. Under prevailing constitutional arrangements the “defence of the realm” is reserved for Westminster, but the secessionist Scottish National Party—which has governed Scotland since 2007 and held an absolute majority in the Edinburgh parliament since 2011—vehemently opposes nuclear weapons even as it softens its opposition to NATO membership, promising in its most recent manifesto to “continue to press the UK government to scrap Trident and cancel its replacement.” Alex Salmond, the ebullient Scottish First Minister, was asked in January about the possibility of striking a deal with rUK to preserve the Clyde bases. His response was characteristically robust:

“It is inconceivable that an independent nation of 5.25 million people would tolerate the continued presence of weapons of mass destruction on its soil. I do not believe that any Government that put forward such a proposition would be elected by the people of Scotland.”

If the referendum goes the Nationalists’ way and the Clyde bases come under Scottish sovereignty, then, the negotiators for the new state are likely to demand a swift exit for the subs. And here lies the problem: there is, at least for now, nowhere else for them to go.

When the UK first acquired the Polaris system in 1963, the Ministry of Defence considered some ten sites as having the requisite combination of deep water, secrecy and ready access to the Atlantic. Only four of these spots are outside Scotland, and one of those four, Milford Haven, is in Wales, another area of the UK where nationalism has simmered on and off (albeit currently off) in recent years. It is also home to large petrochemical facilities, including Europe’s largest liquefied natural gas terminal, which presumably would have to move.

Only one, Devonport, is currently an active naval base. It lies in a built-up area of greater Plymouth, a city of over 250,000 with little space to spare, almost certainly not enough to meet safety standards (under current arrangements, the subs are disarmed when they visit for maintenance). Of the remaining two, one, the Isle of Portland, is a geological World Heritage Site and the sailing venue for the 2012 Olympics; and the other, Falmouth, is a picturesque sailing port popular with cruise lines. Neither would be a popular destination for nuclear weapons, and both would require substantial work to install the requisite infrastructure.

Theoretically, Britain could convert to land-launched missiles, but building silos would suffer from many of the same logistical and political problems as relocating the submarines, and would involve technology completely new to Britain. Space is at a premium in crowded England, especially on the west coast, and any politician whose district accepts a nuclear base can expect a rough ride from the electorate, especially if evictions become necessary. Time is also short: even in 1963, with the impetus of the Cold War, the Clyde bases took five years to construct. And with defense cuts resulting in mass redundancies of personnel, public opinion may resent massive additional expenditure on inanimate objects.

Finally, basing agreements for the existing submarines might be reached with an ally, presumably a fellow nuclear power such as the US or France, whose own ballistic fleet is based in nearby Brittany. But Trident’s legitimacy within the UK rests upon successive governments’ claims to possess a truly “independent” deterrent—an assertion that is already tenuous because the existing missiles are manufactured in, “pooled” with and maintained by the United States (although the warheads remain in the UK). The existing nuclear relationship between the US and UK is close—too close for some in British politics—but such a relationship with France, particularly with the addition of foreign ballistic submarines and their armament on French soil, would likely be a prickly one, especially given the historic connection between nuclear weapons and French nationalism. For these reasons, Professor William Walker, co-author of one of the few considered studies on these matters, was surely correct when he told an audience at the Carnegie Endowment for International Peace on April 3rd that such foreign basing options, whilst logistically feasible, were “politically implausible” for the UK.

Worse by far for any British government than any of these bad options, however, would be a decision to get rid of its nuclear arsenal entirely. It is difficult to see how Britain could continue to defend its claim to a permanent seat on the UN Security Council—already shaken, according to the hypothesis (and by the admission of the current prime minister) by the loss of a major constituent territory—as the only non-nuclear power amongst the P5. The United States, whose good graces have been central to British strategy for decades, might look askance at an ally that, having made defense cuts of strategic significance, appeared unable to hold onto its deterrent. Politically, it would be near-impossible for any British government to admit that it is now Trident alone—rather than some mythological Bulldog Spirit or honest-broker reputation—that sustains its place at the top table.

Meanwhile, the political clock will keep ticking. If a final deal between an independent Scotland and its diminished neighbor is not reached quickly, bond markets will no doubt become jittery, threatening both countries’ credit. It is difficult to see how the current administration in London could long hold onto office, having failed to preserve the integrity of the country it was elected to govern; and in any event, the next UK general election must be held by May 2015, a mere seven months after the likely date of the referendum.

Of the three main UK parties, only the Conservatives are reliably pro-Trident. Their coalition partners the Liberal Democrats, who may again be called upon to enter government after the 2015 election, are opposed to Trident but are investigating “alternatives.” Labour, with its anti-nuclear history, is split on the issue: the last time Trident was renewed, in 2007, Tony Blair’s parliamentary majority evaporated, forcing him to rely on the votes of opposition Conservative MPs. The current coalition, in light of the opposing views of its two components, has put off a final decision on replacement until after the 2015 election. Given that the current system expires in 2024, such a decision would probably need to be taken very quickly.

If, when that decision goes to a parliamentary vote, there is no immediately obvious place to put the subs, calls to discontinue the program will reach a crescendo. A weakened state with a relatively new government, little time to spare and few clear threats to rely on as justifying the enormous expense of replacement might find difficulty resisting them.

In March, a joint committee of the British parliament’s two houses published its first review of the country’s 2010 National Security Strategy. Among much else, the report criticized the government’s failure to consider the potential impact of Scottish independence, evidenced especially by some unimpressive December 2011 testimony on the issue from the then-National Security Adviser, Sir Peter Ricketts, now Britain’s ambassador to France. The overall impression given was one of ostrich-like self-imposed ignorance. But this is a strategic headache the British government would be well-advised to address, and soon.

A.J. Wilson is a visiting fellow with the Atlantic Council’s International Security Program and a former political advisor in the UK Parliament. Photo credit: Royal Navy.