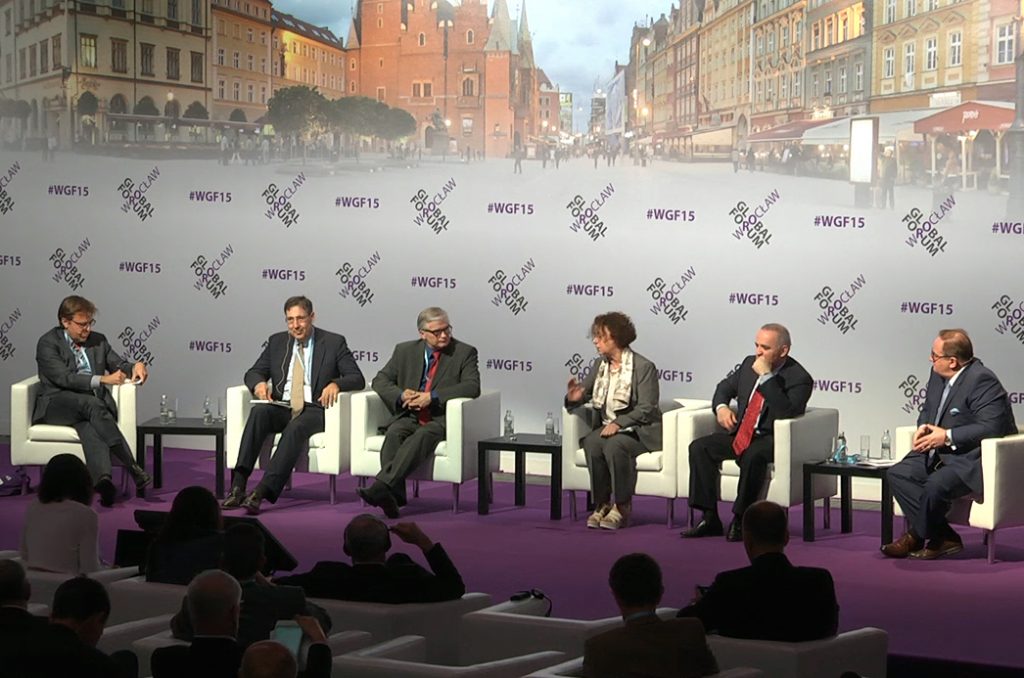 Russian President Vladimir Putin has a strategy clearly aimed at dividing the Western alliance arrayed against him and this must not be allowed to succeed, two European officials said June 12.

“If we understand that one of the goals of Mr. Putin is to divide us, then maybe it will be easier for some of the European leaders and ordinary people in some European countries [to understand] why we should react, why we should stay united, and why we should leave no doubt to Russia’s leadership that we are ready and willing to counterbalance their actions in any situation,” Włodzimierz Cimoszewicz, a Polish Senator and former Prime Minster, said at the Atlantic Council’s Wrocław Global Forum in Wrocław, Poland.

Jacek Saryusz-Wolski, a Member of the European Parliament, echoed this sentiment.

“We shouldn’t allow him to play cat and mouse… in outmaneuvering us,” he added.

Kaminski noted that the crisis involving Russia began not with the Euromaidan protests in Ukraine toward the end of 2013, but in 2012 when Putin announced his return to the Kremlin after spending four years as Prime Minister because he was not permitted by the constitution to serve three consecutive terms as President. Dmitry Medvedev was Putin’s handpicked successor during that interim period. He has since swapped roles with Putin and serves as Prime Minister.

Kasparov described the selection of Medvedev as a “great smokescreen” created by the KGB.

“For nearly four years Putin successfully fooled both Europeans and Americans, pretending that Medvedev was a real force,” said Kasparov. “The foreign policy of Europe and Washington has been based on the assumption that Medvedev could be a political force in Russia to consider as someone who could change the trend.”

“Eventually every dictator has to look for enemies… today [Putin] needs enemies because that is the only way to justify why he is there fifteen years” since first taking office, he added.

Cimoszewicz said that rather than a classical military attack, Putin may use propaganda and stir up Russian minorities in an attempt to destabilize former Soviet republics.

“We have seen recently what they can do,” he said referring to developments in Ukraine.

Putin denies Russian troops are fighting in Ukraine, but two new reports—one by the Atlantic Council (Hiding in Plain Sight: Putin’s War in Ukraine) and the other by the assassinated Russian opposition leader Boris Nemtsov (Putin.War)—belie that claim.

“We should understand precisely well what is at stake on our side in this confrontation caused by Russia,” said Cimoszewicz. “This is not just the future of Ukraine… this is the question of the future of Western democratic community.”

“The dirty little truth right now about Europe is that member states [have] shortsighted interests,” said Palacio. “Today Europe, the European Union, is either a service provider or seen as a bogeyman or an albatross.”

Could the West do more? “The first thing we need to have is the political will. Of course we can do more,” she added.

Palacio said part of the problem is that the Obama administration does not believe the West has the high moral ground.

“It is clear we don’t have a message,” she said.

Herbst, who described the situation in Ukraine as a “global crisis,” said this was not understood in Washington a year ago, but “the United States has almost awakened to the crisis of Kremlin revisionism.”

He said it is important to provide defensive weapons to Ukraine to help it counter Russian-backed separatists.

“What’s missing right now is American leadership to strengthen the alliance… and if we arm Ukraine we will keep Mr. Putin in his box where he definitely needs to be,” he said.