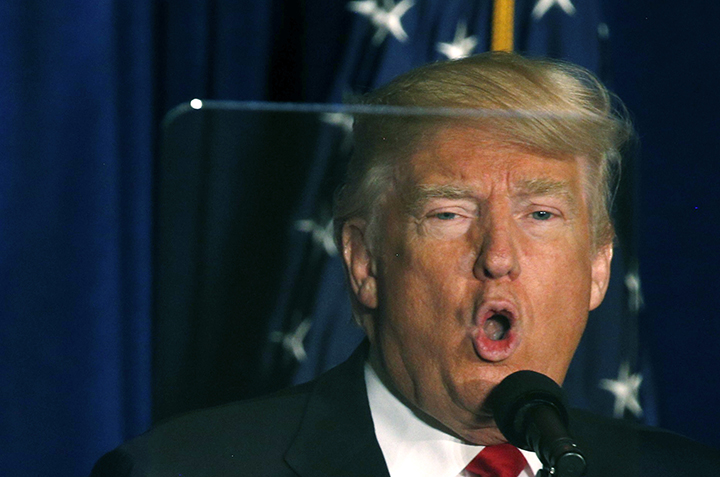 R. Nicholas Burns, an Atlantic Council board director who served as the State Department’s number three official in the George W. Bush administration, offered a searing critique of Republican presidential frontrunner Donald Trump’s April 27 foreign policy speech in an interview with the New Atlanticist’s Ashish Kumar Sen. Burns is currently a visiting fellow at the Hoover Institution at Stanford University and an advisor to Hillary Rodham Clinton’s presidential campaign.* Here are excerpts from our interview.

Q: What are your thoughts on Donald Trump’s “America First” foreign policy speech?

Burns: I thought it was a very disappointing speech, but I also think it was a very revealing speech in two respects. Number one, he is offering the American public dangerous ideas that will harm our national security. He has not backed away from his proposal to build a wall with Mexico and he has denigrated Mexicans in vulgar language; he vows to keep all Muslim refugees out of the United States and he hasn’t backed down; he has suggested that he is open to questioning the viability of the NATO alliance and has threatened our strongest allies that if they don’t do things the way he wants them done he will walk away from NATO; and he has also questioned whether we should continue to have a defense alliance with Japan and South Korea. These are all dangerous ideas. I haven’t even included in this the idea of an export surtax on Chinese exports to the United States, which would very likely produce a trade war.

The ideas that he is putting forward are dangerous to America and what his speech revealed to me is that he is a dangerous leader. He doesn’t appear to have the in-depth knowledge—about the world, history, economics, politics—that any serious presidential candidate should have. He lacks the nuance and sophistication that say [Dwight D.] Eisenhower and George H.W. Bush—just to single out two Republican Presidents in the last fifty years—had. It is that maturity and judgment that are so important in the Oval Office that all of our Presidents have to have. He doesn’t appear to have any of it.

Trump’s speech [on April 27] was a categorical denunciation of all of American foreign policy since the end of the Cold War. He said it was a series of failures. He said he was the only person—his words, not mine—who could turn the situation around. He, in effect, indicted all of our past Presidents, Republicans and Democrats, since the end of the Cold War, all of our Secretaries of State and Secretaries of Defense. It takes someone with a very big ego, and probably someone who is very naïve and doesn’t understand global politics, to make such a categorical judgment. The speech was a series of threats and ultimatums.

He appeared in the speech, and in the past several weeks on the campaign trail, to be much tougher on our democratic allies—Britain, France, Germany, Japan, South Korea, than on Russia or China. That obviously is a major miscalculation on his part.

And, finally, he made a major appeal that the United States devote itself to diplomacy. As someone who served in the United States Foreign Service, I certainly support diplomacy. But he is the guy who offended 1.6 billion Muslims and Mexico and our allies with all of his egregious statements, so you have to wonder what kind of diplomacy he is talking about.

Donald Trump says “American First” would be the banner that he would raise. He may want to rethink that. The America First movement of the late 1930s and early 1940s, up until Pearl Harbor, was the American isolationist and appeasement movement that argued that we should not support Britain and France, that we should not support the struggle against Hitler and Nazi Germany. It’s a shameful organization from that period. To call yourself “America First” indicates that he is unaware of this history or doesn’t care. It is indicative of the campaign that they don’t seem to understand this very important episode of American history.

“The ideas that he is putting forward are dangerous to America and what his speech revealed to me is that he is a dangerous leader.”

Q: Trump says he wants to “make America great again.” Has he in your mind provided a clear explanation of what that means or how he will achieve this goal?

Burns: The speech lacked specific proposals. It was, in essence, a campaign speech where he presented several themes that were in many ways conflicting. I contest his view that America is not great. We are still the strongest military power in the world. We are still the most influential country in terms of our political influence. We have the largest and most innovative economy. We have the strongest cultural power in terms of Silicon Valley, American values, and our immigrant tradition. I don’t concede the point that we are not great and that we need to be great again. I think we are great, as Hillary Clinton has said.

We obviously are highly imperfect. We have suffered some major disappointments in our foreign policy in the last fifteen to twenty years. But look at the string of foreign policy successes that President Obama has offered. Donald Trump says we don’t win any more, there are no successes. Well, the two trade agreements [the Transatlantic Trade and Investment Partnership (TTIP) and the Trans-Pacific Partnership (TPP)] that President Obama is negotiating are successes. The Iran nuclear deal, in my judgment, is a success. The opening to Cuba and the Paris climate change pact are all examples of American diplomacy at work. President Obama and Secretary of State John Kerry deserve a lot of credit.

Trump was also mistaken on several facts. He said we are not fighting the Islamic State. Well, tell that to the American Air Force, the American Special Forces, all of our thousands of service personnel in the Middle East who have conducted an air war against the Islamic State, both in Iraq and in Syria, for the last nearly two years. If you present yourself to the American public saying you want to be President you should be clear about your facts, and he wasn’t.

“I don’t concede the point that we are not great and that we need to be great again.”

Q: What are your thoughts on Trump’s suggestion that under President Obama and Secretary Clinton the United States has had “a reckless, rudderless and aimless foreign policy, one that has blazed the path of destruction in its wake”?

Burns: It is that kind of categorical denunciation, without nuance, without caveat, without any degree of balance that I think should worry us about his judgement and demeanor. He cast a series of thunderbolts, major judgments, categorical critiques of all of American foreign policy. He didn’t concede that anything had been done right or that there had been any successes whatsoever in the last thirty years. To me that is sophistry. It is not an honest, objective appraisal of our global situation.  That disturbs me.

I think he is a dangerous person because he is unpredictable. He certainly doesn’t have the requisite knowledge of the world to be effective as a negotiator—as President, as Commander in Chief—in the world. His massive ego and his bombastic statements reveal someone who sees things entirely in black and white and cannot perceive that many situations around the world are highly complex and require sophisticated judgments.

“I think he is a dangerous person because he is unpredictable.”

Q: Trump wants to negotiate with Russia. That is not unlike the Obama administration’s initial attempts to reset the relationship with Russia. Under the current circumstances—Russia’s annexation of Crimea and support for separatists in eastern Ukraine—is a reset possible?

Burns: The Obama administration attempted to reset relations with Russia at a very different time. But here we have a situation in 2016 where [Russian President Vladimir] Putin has invaded and annexed Crimea, invaded and divided the Donbas region in Ukraine, and threatened NATO allies—Estonia, Latvia, and Lithuania. So it is naïve to think that somehow we can have a productive relationship with Russia when Russia is engaging in territorial land grabs over the last two years.

I was struck by the fact that Trump was very soft and accommodating toward Russia in his speech and did not mention Crimea, Ukraine, or the threats to our NATO allies. What kind of Commander in Chief would he be? The first job of an American President is to defend American interests, but you also want to be able to defend our allies and work very closely with them. What we saw in the speech was a denunciation of our allies, but not of our adversaries. That indicates to me that he has a naïve view of his own ability to get along with Putin and is underestimating Putin’s assertiveness and cynicism.

“It is naïve to think that somehow we can have a productive relationship with Russia when Russia is engaging in territorial land grabs over the last two years.”

Q: Trump says our allies are not paying their fair share and that the United States must be prepared to let these countries defend themselves. Why is he wrong?

Burns: It is important to remember first that the United States, since 1949 at the start of the NATO alliance, has always been by far the greatest contributor of military force because we are the largest country with the strongest military. That balance between the United States and its NATO allies has not changed; it is not going to change.

Second, every American President since at least Richard Nixon has called on the NATO allies to spend more on their defense. So Trump’s effort is not new. He didn’t invent this. I remember the very tough words of [former Defense] Secretary Bob Gates and his call for NATO to do more to defend the Alliance, to raise defense spending.

We are beginning to see in some NATO countries, in the wake of Russian aggression in Eastern Europe, modest increases in defense spending. I think you will see President Obama at the NATO summit this summer in Warsaw call on the allies to increase in a significant way their defense spending levels and to contribute more to the Alliance. Trump is not the only person calling for this, but what he is doing is he is literally saying that if the allies don’t produce results soon he is going to walk away from the NATO alliance. He is going to rethink the entire commitment. This would be a historic mistake.

Our allies magnify our power. One of the great sources of American strength in the world are our allies—the NATO alliance uniting North America and Europe and our Asian alliance with Australia, South Korea, Japan, our defense partners, and the Philippines, and Thailand. The United States’ geostrategic position is far stronger because we have these allies. China and Russia have no allies and it is a decisive advantage for us that we lead these alliances.

“Our allies magnify our power.”

To say recklessly, as Trump did [on April 27], that he is willing to walk away; to say, as he has done this past month, that the allies should be cast out on their own and that perhaps even the American nuclear umbrella over Japan and South Korea should be lifted in the volatile Asia-Pacific region at a time when North Korea is building a nuclear arsenal, is irresponsible and extremely unwise. It convinces me anew that Trump is entirely unfit to be President of the United States.

* An earlier version of this interview failed to identify Burns as an advisor to the Clinton campaign. The oversight is regretted.

Image: Republican presidential candidate Donald Trump is seen through a teleprompter as he delivers a foreign policy speech at the Mayflower Hotel in Washington on April 27. (Reuters/Kevin Lamarque)