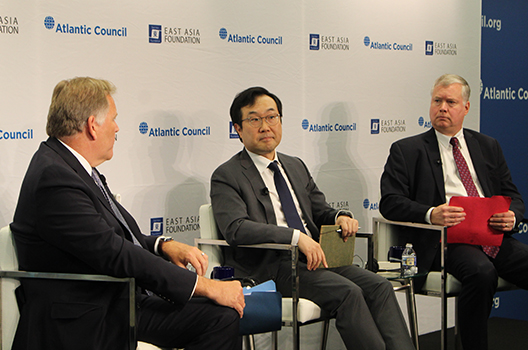 US Special Representative for North Korea Stephen Biegun said at the Atlantic Council in Washington on June 19 that “the door is wide open” for negotiations with North Korea, while admitting that US-North Korean diplomacy has been in a “holding pattern” since the summit between US President Donald J. Trump and North Korean leader Kim Jong-un in Hanoi in February.

“For both countries, denuclearization sits at the center of this discussion,” Biegun said, adding: “Our expectations have been made quite clear to the North Koreans, but Chairman Kim has also signaled to us during the course of [the Hanoi summit] how important this issue is to him.”

He added that the goal of US-North Korean diplomacy is to change the security environment that led North Korea to develop weapons of mass destruction in the first place.

US and North Korean negotiators have struggled to bridge the gap on how they define complete, verifiable, and irreversible denuclearization (CVID)—a key US demand. “We don’t have that agreed definition of what denuclearization is and we do consider that to be a very important starting point,” Biegun admitted. “We will never get to our destination if we don’t know where we are going, so it is very important for us to agree upfront on what that destination is.”

Trump and North Korean leader Kim Jong-un have had two summits in the past thirteen months. The first, in Singapore on June 12, 2018—this meeting was historic as it was the first time that a sitting US president had met the leader of North Korea—produced a joint statement in which Trump committed to provide security guarantees to North Korea, while Kim “reaffirmed his firm and unwavering commitment to complete denuclearization of the Korean Peninsula.”

The second summit in Hanoi on February 27 and 28, 2019, ended in failure as Kim refused to agree to complete denuclearization. Instead, North Korea insisted that all sanctions be lifted in exchange for dismantling only its most important nuclear facility—the Yongbyon enrichment facility.

“Sometimes you have to walk,” Trump told reporters at a press conference in Hanoi after the summit.

Biegun disagreed with the prevailing view that the Hanoi summit had been a failure and said the outcome underscored the necessity for sustained working-level negotiations between the United States and North Korea. But he recounted that in meetings ahead of the Hanoi summit, US negotiators quickly realized that their North Korean counterparts were not empowered to negotiate on denuclearization; that was an issue that Kim controlled exclusively.

“The [North Korean] negotiators, when they meet with us again, must be empowered to be able to negotiate on all of the issues,” said Biegun. “It is not enough for us to talk about transforming relations or advancing peace on the peninsula or the humanitarian issues we have discussed around the recovery of remains or other issues that could help heal the wounds of the Korean War sixty-six years ago. We also have to talk about denuclearization.”

Asked by Michael J. Rogers, an Atlantic Council board member and a Republican former US representative from Michigan, whether talking about denuclearization would be a precondition for working-level meetings, Biegun replied: “No, but it is definitely the pathway to success for us.”

“We can’t make enough progress without meaningful, verifiable steps on denuclearization. It is absolutely the core of this,” he said, adding: “It will be met by equal vigor on our part to address in parallel all of the other commitments our two leaders made in Singapore.”

“Both sides understand the need for a flexible approach… We have to go beyond the formulas that for the past 25 years have failed to resolve this problem,” Biegun said. “We have made clear that the US is looking for meaningful and verifiable steps on denuclearization and we understand that in the North Korean view this is possible, but needs to proceed in context with broader discussions of security guarantees and improved overall relations.”

This position, Biegun noted, is not different from the Singapore agreement. “In short, to regain our momentum in our negotiations, it would behoove us to go back to… the four basic areas of agreement in the joint statement that came out of the Singapore summit,” he said.

Rogers said “it was clear after Singapore that we still needed an explicit roadmap to final, fully justifiable and verifiable denuclearization and the most difficult days were still ahead of us. One year later, we are still waiting for that roadmap.”

In the months following the Hanoi summit, Rogers added, “we have seen a strong dose of realism increasingly tempered in cautious optimism of early negotiations.”

Sung-hwan Kim, a former South Korean minister of foreign affairs and trade who is a board member of the East Asia Foundation, said the United States and North Korea “do not share a common understanding on the definition and targets of denuclearization of North Korea.”

He described North Korea’s proposal to denuclearize facilities at Yongbyon as a “meaningful and important step in denuclearization process.”

Lee, South Korea’s special representative for Korean Peninsula peace and security affairs, said “differences should be ironed out beforehand so that the leaders can choose from several options.”

Responding to rumors that senior North Korean nuclear negotiators had been executed and imprisoned for their role in the failed Hanoi summit, Biegun described such accounts as “overblown” noting that “so much of what happens inside North Korea is opaque to us.”

He described the North Korean negotiators as “capable and effective.”

“The fact that we didn’t reach an agreement in Hanoi… isn’t a failure, but it wasn’t our preferred outcome,” he added.

Biegun admitted: “It is no secret that since Hanoi, the US-North Korean diplomacy has been in something of a holding pattern.”

But, he added, “in the past week there has been an uptick in activity.”

The US president recently declared that he had received a “beautiful letter” from Kim in which the North Korean leader had offered a “reset” in relations. A series of meetings this month could also energize US-North Korean diplomacy. On June 20, Chinese President Xi Jinping will make his first state visit to North Korea where the situation on the Korean Peninsula will be high on the agenda when he meets Kim. Trump himself will travel to South Korea later this month for a meeting with Moon.

Lee said Xi’s meeting with Kim could reignite US-North Korea dialogue. Biegun added that when it comes to a policy toward the Korean Peninsula “China agrees with us 100 percent, some of the way.”

“China is not doing this as a favor for the United States of America. This is China’s national interest, and in this case Chinese national interests and American national interests coincide. That’s a pretty durable foundation for cooperation and we have every expectation that President Xi will continue to send constructive and appropriate messages during the course of the next two days in Pyongyang,” said Biegun.

Speaking in Sweden last week, Moon urged North Korea to re-engage in dialogue with the international community. Lee reiterated that message. He said North Korea has two incentives to come to the negotiating table—first, to ensure security guarantees if it gives up its nuclear programs, and second, to realize the possibility of a sanctions-free future.

“A strategic decision by North Korea will drastically improve its global image and the livelihood of its people,” Lee said while describing such a decision as historic. “But in order to make history North Korea must have the courage to grab the opportunity when it presents itself,” he added.

Lee said South Korea is awaiting another important decision by Kim and quoted a recent letter from the North Korean leader on keeping “the flow of inter-Korean relations on the path towards peace, prosperity, and reunification.” He said Kim should accept Moon’s invitation to an inter-Korean summit, preferably before Trump visits South Korea next week.

South Korea’s North Korean policy, Lee said, is based on the following principles: Seoul will not resort to the use of force on the Korean Peninsula, but it remains committed to enforcing international sanctions until complete denuclearization has been achieved; it will pursue complete denuclearization and the establishment of a permanent peace on the Korean Peninsula; it will maintain a top-down approach to nuclear diplomacy; and it will cooperate closely with Washington on this issue because “it is a matter of life and death” for South Korea.

Lee, noting that Trump, Kim, and Moon have all set their sights on denuclearization, said this presents a “golden opportunity.”

“North Korea is on the front burner in the White House for the first time ever,” he said, adding “Never before has the leader of North Korea expressed his willingness for complete denuclearization in person and on camera for the world to see. And the current administration in [Seoul] is playing a far more proactive role than ever before,” he added. What’s more, Lee pointed to “the personal trust” between the three leaders and a “genuine meeting of minds between the working level negotiators.”

Kim, the former South Korean minister, said it was important not to lose momentum in the dialogue. Urging both sides to show flexibility, he said North Korea should make a “strategic decision” to give up its nuclear weapons and facilities, while the United States should reciprocate by more seriously addressing North Korea’s security concerns.