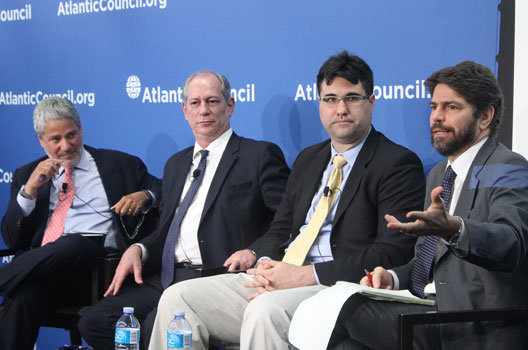 Amid political uncertainty and a deepening recession, economic growth is seen as the “key” to reform and prosperity in Brazil.

“If we fail economic growth, all the other scenarios would be a disaster,” said Ricardo Sennes, a nonresident senior Brazil fellow at the Atlantic Council’s Adrienne Arsht Latin America Center. “Not just disaster in the economic sense, but also political disaster with strong social disorder etc.”

Sennes spoke at an event at the Atlantic Council on June 6. He is the co-author of a new issue brief, “The Path to Power in Brazil,” along with Andrea Murta, an associate director in the Council’s Latin America Center. Sennes was joined in a panel discussion by Ciro Gomes, a former Brazilian presidential candidate, and Mauricio Moura, a pollster with Ideia Inteligencia. Peter Schechter, director of the Council’s Latin America Center, moderated the discussion.

In Brazil, President Dilma Rousseff has been suspended and faces impeachment proceedings on charges of budgetary manipulation, several top government officials have been linked to a Petrobras corruption investigation (Lavo Jato, or Operation Car Wash), and the fact that interim President Michel Temer’s own government has been rocked by scandal add to the political and economic uncertainty in the country.

The panelists cautioned that even though overall economic growth can indeed be beneficial for Brazil, the methods behind creating and measuring such growth need to be taken into account. Citing high commodity prices, currency devaluation, and low revenue as the main sources of the economic crisis, Gomes called for lower interest rates, the restructuring of public debt, and investments in infrastructure.

Most Brazilians are less eager for trade deals, but instead eager for creating jobs and lowering the inflation rate in order to buy essential products, said Mauro.

Given the country’s current political and socioeconomic conditions, the necessary economic reform may not even be possible.

On one hand, Rousseff’s suspension and the Lava Jato investigations demonstrate the start of a transition away from Brazil’s history of corruption toward a stricter rule of law and sustained economic development. To Sennes, these events signal a “modernization process,” strengthening Brazilian institutions and allowing for a peaceful possible removal from power.

Even though these processes create a level of political uncertainty, some analysts still expect a stable election cycle. Sennes predicted familiar candidates for 2018, including former senator Marina Silva for the Sustainability Network party (REDE), current Governor of Sao Paolo Geraldo Alckmin for The Brazilian Social Democratic Party (PSDB), and current Minister of Finance Henrique Meirelles for The Brazilian Democratic Movement Party (PMDB) should Temer’s administration see economic improvement. He also speculated that former president Luiz Inacio Lula da Silva, commonly known as Lula, could be a candidate for The Worker’s Party (PT), and that Gomes was a potential nominee for the Democratic Labour Party (PDT).

New reforms by the Supreme Court have decreased the length of the campaign season to six weeks, making it unlikely that outsider candidates will gain significant support, despite rising disapproval of experienced politicians, according to Moura. At the same time, due to campaign finance reform rulings, candidates will have to appeal to regular citizens for funding, making public support necessary for the next administration, he said.

Rousseff’s suspension and Lava Jato have the potential to cause further economic damage and political instability, however. Analysts say that if the situation doesn’t improve by the end of 2016, Brazil could see negative eight percent growth from the first quarter of 2014, and GDP could be down by twenty-five percent from its last peak in 2010. Furthermore, if Rousseff ends up being impeached and other high level officials are removed from power, they could weaken government support from bad to worse.

Few Brazilians have faith in government, citing trends of dynastic elitism, a sense of deception by the media, and the untraceable number of political parties as potential sources of dissatisfaction, according to Mauro.

Mauro noted that this disapproval is responsible for the rise of extreme parties in Brazil—particularly on the right—as well as calls for outsider candidates: “The old leaders are suffering a lot with this political crisis. And of course that is extreme positions from the left and from the right, they gain ground… the public opinion is demanding a new figure.”

Gomes argued that this called for a “rupture in democracy” where politicians besides those from the PMDB are elected so that groups of citizens could feel heard.

Sennes contended that “the institutional modernization of Brazil has been quicker than the politician modernization has happened.”

Modernization is something that, “the people and institutions of Brazil are demanding but the politicians can’t respond because they keep having the same leaders,” he added.

If the investigations do remove officials from power, without a strong coalition and significant improvements in economic growth, this dissatisfaction is likely to undermine confidence in the Temer government long before the 2018 campaign season begins, hindering his ability to improve Brazil’s economy. It’s likely to hurt confidence in experienced candidates during the 2018 elections, as well.

Given the uncertainty in Temer’s interim government and possible candidates in the 2018 presidential elections, it is unclear whether economic reforms will actually happen. One thing is for sure: Brazil is at an inflection point, which stands to either improve or worsen its cycle of dissatisfaction and minimal economic growth—both of which hinge on the progress of the next few years.

“Brazil is at a crossroads: it must either reinvent its political forces or deepen the fragmentation contributing to an unprecedented crisis in modern Brasilia,” said Sennes.