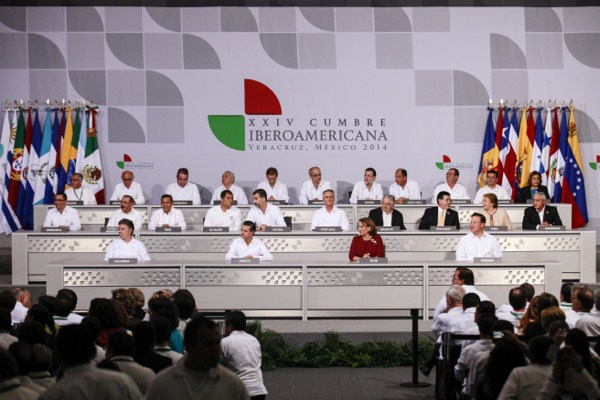 The 24th Ibero-American Summit, which sought to put the focus on education in the context of slow economic growth, did not produce a specific proposal to address the challenges of developing human capital.

The agenda of the biyearly summit, which was held in Veracruz, Mexico, last week, was somewhat sidetracked in light of the recent violence in the country and protests.

While twenty-two heads of state were invited, the presidents of Argentina, Bolivia, Brazil, Cuba, Nicaragua, and Venezuela did not attend the summit. These absent leaders represent countries that are facing some of the greatest challenges in terms of quality of education, high high-school dropout rates, and lack of access to higher education. The citizens of these countries could have benefited from their leaders sharing ideas with their regional and European counterparts.

Mexican President Enrique Peña Nieto spoke about education’s role in creating better opportunities for Ibero-America’s children. Inaugurating the summit on December 8, he cited a meeting of education ministers in August at which concrete goals were formulated, including, increasing student mobility within Ibero-America through a program based on the Erasmus program in Europe and scholarships to study in other countries, increasing academic mobility, and creating a follow-up plan to the 2007-2015 Plan to Fight Illiteracy, which will be called the Ibero-American Plan to Fight Illiteracy throughout Life 2015-2021.

Peña Nieto closed the summit on December 9 by committing to these goals, including providing 40,000 scholarships a year through the “Ibero-American Erasmus” program to students to study within the region over the next five years.

Much more could and should be done.

Political, academic, business, and social leaders understand what is needed. Moving from a broad goal to a specific, action-oriented agenda, however, is difficult and complex. A broader regional agenda should include:

1. Dissemination by governments of more information about the quality of educational institutions at all levels — from early childhood to college — so that parents and students can make informed decisions. Currently, information on test scores and student post-graduation employment is either nonexistent or hard to access in most of Latin America. Compiling this information and making it accessible will help parents and government officials make better decisions about where to send their children and invest education funds in order to have the greatest impact.

2. Making English language skills a regional priority. Governments should dedicate policies and resources to teach technology and English to every student. As the last EF English Proficiency Index shows, a majority of countries in Latin America are in the “Low Proficiency” and “Very Low Proficiency” categories for English skills as compared with the rest of the world. This is unacceptable as English is a critical language in today’s globalized economy.

3. Making Spanish a global asset. Encouraging Spanish language teachers to teach in the US, Europe, and Asia could turn Spanish into one of the best regional exports.

4. Emphasize the need for innovative practices to improve the quality of education while promoting the engagement of entrepreneurs, donors, investors, and civil society actors. During regional summits, discussions and proposals are made and decided by government actors. Much more private sector involvement is needed if politicians are serious about bringing innovation to the system. This will require a deeper conversation about the balance between the government and private sector, regulations, and assessments.

Enabling students and academics to study and work in other countries through facilitated visas and scholarships is an excellent start, but governments should also come together to spread innovative practices and compare lessons learned instead of leaving Veracruz as a one-off effort to harmonize regional education policies. Hopefully, the next Ibero-American Summit in 2016 in Colombia will lead to deeper and more innovative policies.