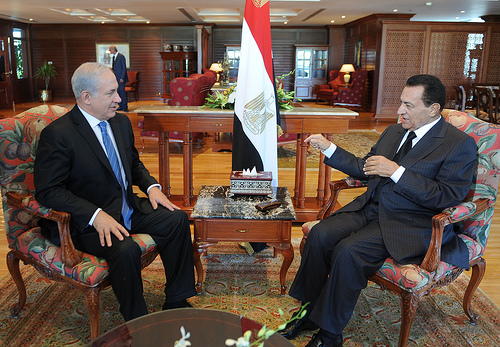 Israeli Prime Minister Binyamin Netanyahu has expressed concern that the massive demonstrations in Egypt could lead to radical Islamist governments, as happened in Iran following anti-Shah protests in the late 1970s. Many Israelis believe it is just a matter of time before the militant Muslim Brotherhood assumes power.

Israeli concern is understandable. Peace with Egypt, which President Hosni Mubarak has faithfully honored, is the keystone of Israeli security. But the turmoil in Egypt, which has now entered a violent phase, is not likely to end in the return to the status quo ante, which means that Israel could be missing its last best chance to make peace with the Arab world.

Although the Muslim Brotherhood thus far has maintained a low profile during the demonstrations, its possible emergence as the governing authority in Egypt, along with the rise of Hezbollah and Hamas in Lebanon and Gaza, would heighten security anxieties in Israel. Unlike Mubarak and King Abdullah of Jordan, who has dissolved his cabinet in an effort to contain unrest there, the Muslim Brotherhood remains ideologically opposed to peaceful relations. According to the Jerusalem Post, a Brotherhood official allegedly told Al-Aral, the Iranian news service, that Egypt should prepare for war against Israel and close the Suez Canal.

Because Mubarak’s oppressive rule has precluded the development of political institutions, much less new political parties, the Brotherhood stands the best chance to fill the political vacuum that is likely to follow Mubarak’s departure. The aftermath of the political demonstrations in Egypt, not to mention Tunisia, Yemen, and Jordan, is not likely to mimic the conditions in Eastern Europe after the fall of the Berlin Wall two decades ago, where in the case of Hungary, Poland, and then Czechoslovakia, an emerging political opposition had slowly taken shape over the previous decade in the guise of reform communism, Solidarity, and Charter 77.

Even so, it is unwise to preemptively conclude that the wave of human rights demonstrations we are witnessing in the Arab world will not in time produce more representative governments. Public anger in Egypt, Jordan, Tunisia, and Yemen is not aimed at Israel; there is no rhetoric of jihad or virulent anti-Western and anti-Israeli sentiment, such as there was in Iran in 1979. In Egypt, and elsewhere, public anger is directed at the inefficiency, indifference, brutality, and corruption of autocratic leaders who deny their citizens a voice in their government and any hope for a better economic future.

It is possible that Islamist governments may emerge from the rubble, but this should not sound the alarms in the West as long as they are peaceful and moderate and adhere to the rules of the international political system. Turkey, Indonesia, and Malaysia too provide models of moderate Islam. In Egypt’s case, Mohammad El Baradei, the former Director General of the International Atomic Energy Agency and Nobel Prize-winner, could lead an interim government, including one that included the Muslim Brotherhood as well as more secular elements, charged with the task of building political institutions and preparing for national elections.

The governing authority that succeeds Mubarak will need considerable assistance if Egypt is to modernize. George Soros has already announced that his foundations would provide assistance to a nascent Egyptian democracy. The Obama administration should likewise provide substantive expertise and financial support, which would help to mitigate past US aid to prop up pro-American authoritarian governments. The emphasis should not be placed on the standard policy default of instilling American political values; instead it should focus on helping reform-minded Egyptian officials to develop opportunity-creating social and economic programs that will offer hope to those mired in a cycle of despair and all the more susceptible for it to the blandishments of jihadists.

In time, the seeds of public protest may yet blossom into democratic government. With any luck, the institution of democratic reforms will help to alter the blinkered attitudes and prejudices in Egypt and elsewhere in the region that insulate the Arab-Islamic world from modernity. While the uncertainty of Egypt’s future understandably provokes anxiety in Israel, the broad-based human rights protests that are spreading throughout the Arab world should be a wake-up call for Netanyahu and other hardliners who are reluctant to make the concessions required to resolve their differences with the Palestinians. That the time is approaching when Israel will no longer be the only democracy in the region should be cause for optimism. But the rise of public protests, driven largely by disaffected youth, also signals a massive rejection of the political status quo, and it will surely intensify international pressure on Israel to make peace with the Arab world. For Israel to misread that message would be an error of strategic proportions.

Hugh De Santis is analytic director at Centra Technology. He is a former career officer in the Department of State and chair of the department of national security strategy at the National War College. Photo credit: Flickr.