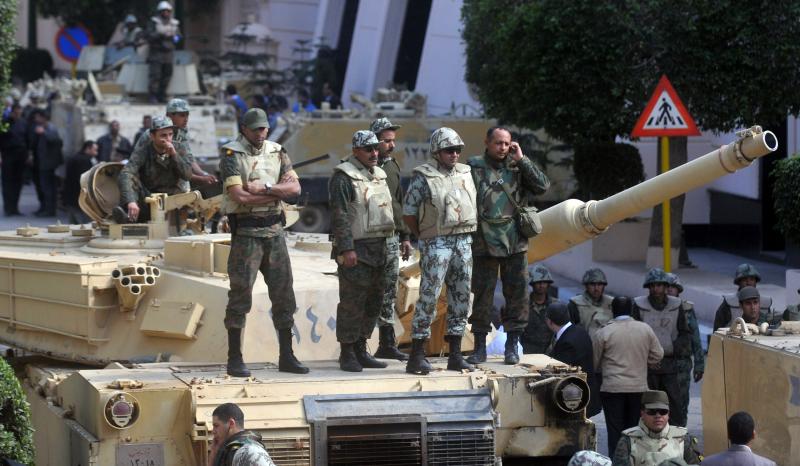 The "Cairo Necropolis" is a bustling jumble of tombs and mausoleums where some 5 million homeless and impoverished (out of 18 million Cairenes) live and work among their dead relatives and ancestors. Along the base of the Mokattam Hills, the City of the Dead stretches for 4 miles from northern to southern Cairo. With 40 percent of Egypt’s population of 82 million living under or just above the United Nations’ poverty line of $2 a day, many come to Dead City looking for work, shelter and food.

Just to keep up with population pressures, the government has to generate 1 million new jobs a year, which is Mission: Impossible. So the Egyptian bureaucracy, started 5,000 years ago, keeps growing.

After three weeks of round-the-clock demonstrations, Hosni Mubarak stepped down from his Pharaonic perch but didn’t leave Egypt.

In his Red Sea abode in Sharm el-Sheik, Mubarak was surrounded by hundreds of loyal guards and state security personnel. Tourists and journalists on access roads were checked and searched by security police. In Cairo, Tahrir (Liberation) Square, occupied day and night by up to 250,000 for almost three weeks, was now cleaned up — and the army very much in charge.

The demonstrators had gone home but many were muttering about a return to the square unless the military accelerated free elections and a new civilian government with no links to the Mubarak regime. A few dozen did return to Tahrir Square still guarded by tanks and armored personnel carriers. Army personnel dismantled protesters’ tents and firmly showed them the exit.

The suspension of the constitution puts Egypt under martial law. Both houses of Parliament were dissolved and the "Armed Forces Supreme Council" is Egypt’s official ruler.

The acting head of government is 75-year-old Field Marshal Mohamed Hussein Tantawi, a Mubarak crony who’s been army chief since 1995, who is also defense minister and the man in charge pending elections in the fall. His acting government is made up of Mubarak loyalists. In a U.S. State Department document released by WikiLeaks, one U.S. official called Tantawi "Mubarak’s poodle." In the 1991 Gulf War, he commanded one of two Egyptian divisions and developed close relationships with U.S. officers.

The first political decision was to dissolve Parliament, where Mubarak’s National Democratic Party won most of the seats in last year’s elections.

The much feared Muslim Brotherhood dropped out of the runoff round of the elections, accusing the government of "fraud, terrorism and violence carried out by police and thugs."

Tantawi’s first priority was to restore security. Inmates from six prisons had either been let out or escaped during the protests that covered Alexandria, Mansura, Tanta and Port Said in the Nile Delta and Aswan and Asyut in Upper Egypt. Some al-Qaida suspects are among them.

Egypt is in a twilight zone. Tantawi’s ruling council is in sole control for six months or until presidential and parliamentary elections can be held. The constitution has been abolished and its articles have to be amended or rewritten. No one believes this can be done much before the end of the year. Rules for a popular referendum to endorse constitutional amendments will also have to be negotiated.

Egypt is faced with a legal obstacle marathon that will take months and anger millions of impatient protesters who already suspect foul play. They cannot turn against the conscript army, the country’s most popular institution. And army commanders are in no hurry to see a civilian government, democratically elected, looking into army involvement in the economy.

No one knows how much of the economy is in the hands of generals. The system was partly copied from the Pakistani army whose retired field grade officers are involved in about 60 percent of the economy. In Egypt, estimates range from 20 to 45 percent.

Over the past 30 years that he has been in power, Mubarak facilitated large government contracts for friends and supporters. Egypt now boasts 26 billionaires.

Gamal Mubarak, the former president’s son, married the daughter of one of them. A number took off in private jets shortly after the popular uprising got underway Jan. 25. But stories about Mubarak’s $40 billion to $70 billion fortune are hogwash spread by al-Jazeera TV. A total of $1 billion or $2 billion is closer to the mark and still staggering.

Mubarak himself maintained a presidential fleet of nine executive Gulfstream jets, worth $335 million, bought through U.S. military assistance of $1.3 billion a year.

Much has been said and written about the role social media played in sparking the Egyptian upheaval. Facebook and Twitter got all the credit. Wael Ghoneim, the Dubai-based Google advertising executive, emerged as the revolution’s leading cyber voice hero. It cost him 12 ugly days in prison before being released. Back in Tahrir Square he was mobbed by well-wishers. But that was only 1 megabyte of the cyber revolution.

The first cyber salvo was fired Dec. 17, when Mohamed Bouazizi, the Tunisian vegetable vendor committed suicide by setting himself on fire, an act that triggered the Tunisian uprising — and the flight of President Zine el-Abidine Ben Ali. Little known European social networks then stepped in with the idea that provided the Egyptian spark plug.

Jan. 25 was National Police Day in Egypt and a public holiday. Euro social network "43 Things" is where you share a goal by creating a goal and ask new friends to sharpen the objective. Perfect for improving on the idea of flooding Tahrir Square with squatters. Euro-based Badoo and Bebo also pitched their cyber tents and fielded "town criers." The cyber pump was primed for Google’s Ghoneim. And cyber contagion has now rippled all over the Arab world.

Al-Jazeera, the Qatar-based and owned global network, has angered Arab leaders from Marrakesh to Medina with its catty-to-stinging liberal criticisms of monarchies and authoritarian regimes.

Its non-stop, 24/7 Egyptian coverage was visually superb. But its running commentaries were a cheering section for the self-proclaimed revolutionaries.

Algeria, under dictatorial rule since independence in 1962, and Yemen, under the same president for 33 years, were fighting off almost daily demonstrations. Persian Gulf oil states under hereditary rulers were quiescent — for the time being. But Kuwait wasn’t taking any chances. It decreed a $3,000 tax-free gift for each inhabitant. Bahrain followed suit with $2,700. Stay tuned.