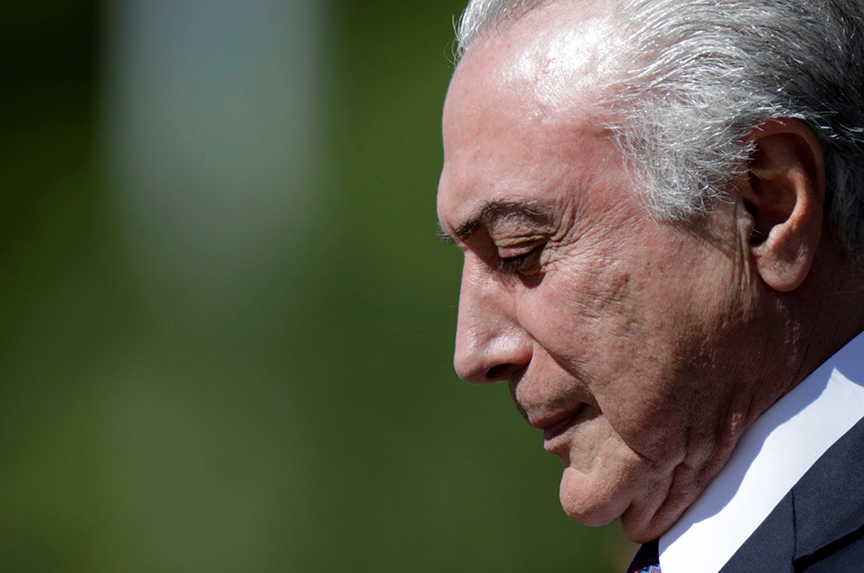 A good-humored people by nature, Brazilians know how to take misfortune in stride. On social media, memes and videos poke fun at the widespread corruption allegations that have mired the nation. Almost every politician and the most prominent businessmen have been tainted, leading to one of Brazil’s worst democratic crises since the fall of the authoritarian military dictatorship in 1985. Even as Brazil’s economy is on the mend, the fate of its president, Michel Temer, and that of the Brazilian government hang in the balance.

Brazil’s attorney general may indict Temer for corruption and obstruction of justice in the coming days. The outcome of the Supreme Electoral Tribunal’s deliberation of the validity of the 2014 Rousseff-Temer election ticket could also provide the means to Temer’s end. Can Temer hold on to the presidency? And what lies ahead for Brazil if he fails?

Three scenarios are likely: 1) Temer could stay in power, bolstered by Congress and the private sector; 2) he could fall prey to legal challenges and his ouster could lead to Congress appointing a new president; or, 3) his fall could lead to direct elections through which the Brazilian people would choose their next president, provided constitutional hurdles are overcome.

Despite its catastrophic implications, the corruption scandal making headlines in Brazil and around the world presents an opportunity for the country to reposition itself and strengthen its democracy. Though unlikely, direct elections would be the most just path forward. A lack of viable presidential candidates notwithstanding, the Brazilian people must be the ones to decide their country’s future.

JBS owners Joesley and Wesley Batista, who were testifying as part of the ongoing Operation Car Wash corruption investigations, handed over the recording and admitted to having paid bribes to dozens of politicians. The two have since resigned from their family’s multibillion-dollar corporation.

The supreme court has now ordered Temer to provide answers in writing to federal police investigators. Meanwhile, Rodrigo Janot, Brazil’s lead prosecutor, could move forward with charges that could result in Temer’s ouster. Politics will certainly play into upcoming investigations as the corruption crisis deepens and Brazilians become more restless.

Temer could face additional pressure from a Supreme Electoral Tribunal case that considers the nullification of impeached President Dilma Rousseff’s, and by association then Vice President Temer’s, election in 2014.

Rousseff and Temer are accused of using illegal funds to supplant the campaign. The 2014 election result could be declared invalid and Temer stripped of the presidency.

Many government officials see an ouster of Temer by the Supreme Electoral Tribunal as least tumultuous and disruptive, and perhaps even as the most honorable outcome. At the moment, the court’s justices seem inclined toward absolution. That may very well change.

What does this mean for Brazil’s government?

Temer is clinging to power at all costs, mostly through support from the Brazilian Congress and the political elites’ desire to see a continuation of his reform agenda. If things stay as they are, Temer will remain in office, but will likely face a tumultuous end to his tenure as his credibility disintegrates. While some Brazilians believe this is the best outcome for the country under the circumstances, the majority of Brazilians remain unconvinced.

Late last week, Brazilians received some good news. The country’s GDP increased by 1 percent per government figures, the first sign of growth in two years. This a cautious step out of Brazil’s deepest recession in its history, one that saw an 8 percent contraction in the span of twenty-four months. The good news, coupled with faith from the private sector, could improve Temer’s chances of staying in power.

Whether Temer survives his dual-edged judicial battle or not, he will undoubtedly struggle to retain support from Congress, which will make it difficult for him to push through reforms. That said, should he remain in office, some maintain it would be less disruptive to the economy.

Indirect elections are the next probable outcome. If Temer is ousted, House Speaker Rodrigo Maia would take office and Congress would appoint a successor in up to thirty days. The new president would hold office until January of 2019.

Tired of politicians stained by corruption charges, most Brazilians are opposed to the prospect of a congressional appointment, which would symbolize a disappointing affirmation of corruption as a norm.

If Temer falls, a proposed constitutional amendment could call for direct elections. Nearly 90 percent of Brazilians support this option since it would give them a chance to choose their own candidate who could properly discuss the proposed labor and economic reforms with civil society.

Direct elections would be a test to Brazil’s democracy. Viable candidates are few and flawed. The leading contender, former President Luiz Inácio Lula da Silva, has been implicated in corruption allegations and is rejected by most Brazilians. Jair Bolsonaro, a controversial former army captain, has expressed nostalgia for Brazil’s notoriously repressive military regime and disdain for immigrants. Many see him as a danger to a free and open Brazil. Yet others, like São Paulo Mayor João Doria (from the PSDB party), are new to politics and do not have the full support of their colleagues. With so few viable options Brazilians have been left wondering what a new beginning would mean.

Nevertheless, many argue direct elections would be the fairest resolution of the current situation because it would reflect the people’s will.

Brazil is facing yet another challenge to its democracy. The country has proven capable and willing to battle the corruption culture. Hope now lies with the Brazilian people’s hunger for change, and the judiciary’s commitment to fight for justice.

Roberta Braga is a program assistant in the Atlantic Council’s Adrienne Arsht Latin America Center. You can follow her on Twitter @RobertaSBraga.