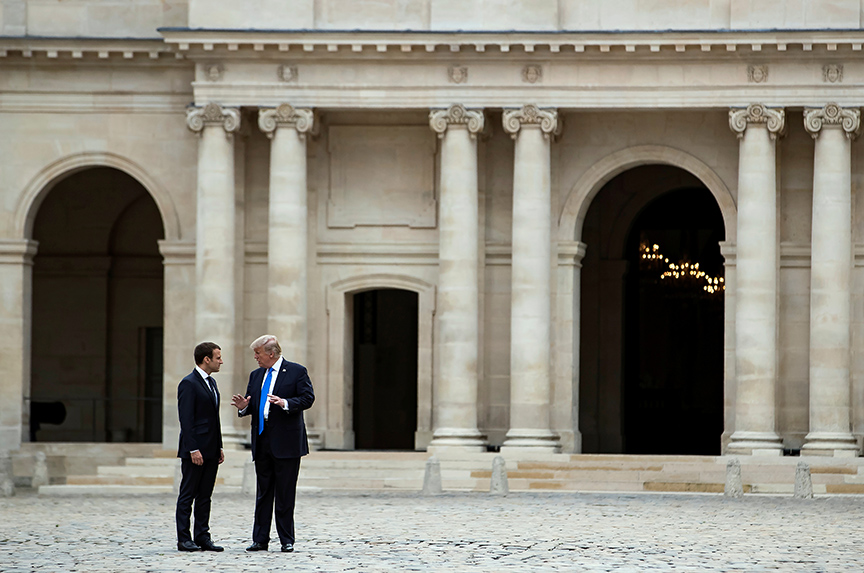 French President Emmanuel Macron said in a television interview on April 15 that he convinced US President Donald J. Trump not to withdraw troops from Syria.

“Ten days ago, President Trump was saying ‘the United States should withdraw from Syria.’ We convinced him it was necessary to stay for the long term,” Macron said in the TV interview.

Macron said that he had also persuaded Trump “that we needed to limit the strikes to chemical weapons [sites], after things got a little carried away over tweets.” He has since tried to walk back those comments.

Last week, in a tweet directed at Russia, Trump wrote missile strikes on Syria would be coming “nice and new and ‘smart.’” A day later, the US president tweeted: “Never said when an attack on Syria would take place. Could be very soon or not so soon at all!”

Trump and Macron have formed a unique bond. The two spoke several times in the lead up to the joint US, British, and French strikes on suspected chemical weapons sites in Syria on April 13. The US president attended Bastille Day celebrations in France in July of 2017 where he was so impressed by the celebration that he asked to have a bigger and better military parade in Washington.

On April 24, Trump will host Macron for a state dinner—the first of his administration.

Trump and Macron make an unlikely pair. What the two have in common is that they tapped into populist anger and by doing so pulled off surprising electoral victories. They are also both policy disruptors.

Macron has, so far, been successful in achieving this end.

However, said Araud, the relationship is by no means a “bromance” as it has often been portrayed in the media. “There is simply a common interest on both sides,” he said.

Trump and Macron have their differences, including on the Iran nuclear deal (which Trump wants to ditch) and the Paris climate change agreement (from which Trump has pulled out). Macron has shown strong support for both deals.

Araud spoke at the Atlantic Council on April 12. He gave the keynote address and then participated in a panel discussion at the launch of Atlantic Council nonresident senior fellow Jeff Lightfoot’s report The French-American Alliance in an America-First Era.

Damon Wilson, executive vice president for programs and strategy at the Atlantic Council, said in introductory remarks: “As Europe faces internal and external challenges, and the United States grapples with an extraordinary debate about its own role in the world, major disruptions are looming [for] the transatlantic relationship.”

“It is in the midst of this uncertainty that France plays a crucial role as the United States’ oldest ally, one of its most important allies, and as a critical actor on the global stage,” he added.

Macron positioned himself as a dependable partner for Trump early in his presidency. He has been aided in this effort by ground truths created by political developments in Europe. The United Kingdom continues to grapple with the implications of its decision to leave the European Union, while German Chancellor Angela Merkel was until recently distracted by a months-long effort to build a coalition. Moreover, unlike Macron, whose term in office did not overlap with Barack Obama’s, Merkel’s strong relationship with the former US president puts her at a disadvantage when it comes to forming a similar bond with Trump.

And so, “we are living our fifteen minutes of fame,” Araud said of France.

Glasser asked the panelists about the risk Macron faces in becoming Europe’s public interlocutor with Trump, who is deeply unpopular in France.

Lightfoot noted that a recent Le Figaro poll found nine in ten French have a poor opinion of Trump. “He almost embodies what a lot of French people find to be the worst characteristics of Americans… almost the archetype of the ugly American in a certain sense,” said Lightfoot

Lightfoot said the state visit will serve as a moment of truth. The challenge for France, and much of Europe, is a US president who seeks to be an anti-status quo actor and wants to overturn the international rules-based order, he said.

“This is where the stakes are quite high for President Macron,” Lightfoot said. If, despite his meeting with Macron, Trump decides to pull the United States out of the Iran nuclear deal and the European Union does not get a long-term reprieve on US steel and aluminum tariffs, Lightfoot said that the people in France will ask Macron: “What have you gotten out of this relationship with President Trump?”

The message emerging from the Trump-Macron meeting will be one of transatlantic unity, said Araud. “The fundamental message of [Macron] will be: together… Europe and the United States,” he said.

“There is a temptation in American society to go alone,” said Araud. “We want to repeat the message that it is better to stay together and to explain how we can stay together.”

Trump has been skeptical of multilateralism. Araud admitted that the current model for how nations work together has not always been effective. This is a fact, he said, exemplified by the United Nations.

“We need a new, effective multilateralism,” said Araud. “The Western-dominated world order is collapsing. So, how to address this challenge?”

After his early criticism of the United States’ NATO allies for not meeting agreed upon defense spending targets, Trump appears to be making an effort to work with his European partners. Unlike a year ago, when the United States alone conducted missile strikes on Syria in response to a chemical weapons attack, on April 13, in response to a similar provocation, Trump coordinated closely with Macron and British Prime Minister Theresa May. The British and French militaries joined the United States in responding to the suspected chemical weapons attack on the Damascus suburb of Douma.

Trump has reached out to other European leaders as well.

On April 27, just three days after he meets Macron, Trump will meet Merkel at the White House.

In order to be a solid and reliable partner to Trump in the transatlantic relationship and Merkel in Europe, Macron must have the support of his own people.

“Macron has two things to do to be a real player on the European stage in the way that Chancellor Merkel has been over the last few years, although she is now weakened,” said Burwell. “One is economic and the other is diplomatic. He must show that this summit [with Trump] is not just about the United States and France, but it is him as an interlocutor for Europe,” she added.

Macron has faced a degree of pushback in response to economic reforms implemented earlier in his administration. Macron continues to push reforms, including changes to labor laws, in an attempt to make France more competitive on the international stage. Macron’s En Marche! movement has a majority in the French National Assembly. That gives him the legislative advantage. On the streets, however, he has faced some protests.

Macron is trying to do a “holistic reform of the [French] economy that will move France forward,” said Burwell. A lot is riding of the success of these reforms, she added.

If Macron gives in to striking French workers or the reforms fail, he will be much weakened, cautioned Burwell. “If France is really going to be a partner of Germany over the next couple of years in Europe and address issues of Eurozone reform it has to do so from a strong domestic position,” she added.

Imbert, Macron’s social policy adviser, said that the French president wants to tackle inequality at its roots. “Transforming our rules means that in the future we want to help people to develop business,” he said.