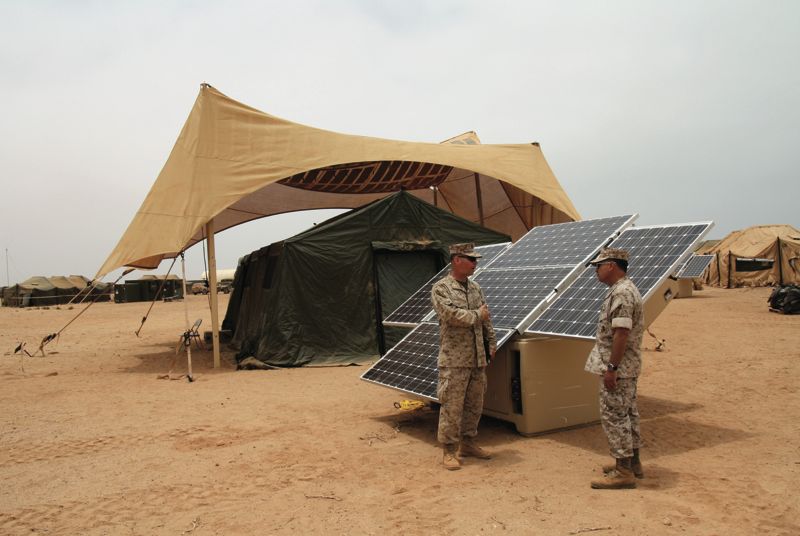 With headlines about unrest in the Middle East and oil prices jumping to the highest level since 2008, energy has again risen to the forefront of the public agenda. But for those of us in the national security arena, energy should never fall from our radar. Energy is critical to military operations – for the United States and our NATO partners – and presents an important opportunity for success in the Afghanistan Mission. Beyond the geopolitical externalities that dominate today’s public discourse on energy security, access to energy carries profound implications both for NATO forces and local Afghans.  With a collaborative, strategic approach to energy, NATO forces will have the means to overcome enemy insurgents and promote human development in Afghanistan.

At the macro level, NATO forces require large volumes of fuel to operate in Afghanistan. Energy is consumed in generators powering forward operating bases (providing electricity for communications as well as heating, cooling, and lighting of shelters), as well as tactical vehicles transporting troops across Afghanistan’s treacherous terrain, aircraft and helicopters delivering materiel into and around theater, and Remotely Piloted Vehicles gathering intelligence from overhead. Thus, energy is fundamental to mission success in Afghanistan.  But providing all this energy for NATO forces translates into an operational challenge. Not only is fuel brought into Afghanistan by ground, rail, and air transport at a high cost, but it is also trucked to troops based in remote locations throughout the country. Resupply convoys have a high opportunity cost as they place resources at risk that could otherwise contribute to the mission more directly. They consume fuel as they wind through mountain passes, require force protection, and are vulnerable to disruption from weather events or insurgent attack. In turn, reducing energy demand at base camps lowers the frequency for fuel resupply, which allows commanders to redirect forces from escorting fuel trucks to engaging in other activities. A range of low-cost, low-risk solutions to pare down energy demand on bases exist today that could be implemented at scale with a collaborative NATO approach. For example, right-sizing generators to loads and controlling temperatures in shelters can reduce energy demand significantly.

At the tactical edge – in isolated corners of Afghanistan – advanced equipment aiding NATO forces comes with the need for battery power at the individual level.  For example, it is estimated that United States Army Soldiers each carry 20-40 pounds of batteries for a typical 72-hour mission. Heavy loads can limit the mobility of Service members on foot patrol, presenting difficulties evading enemy attack as well as long-term health implications (like musculoskeletal injuries). To be successful against insurgents, NATO forces need to be stealthy and agile, but the persistent need to return to vehicles or tactical operation centers to replace batteries or recharge with noisy generators can open troops to enemy detection. In response, NATO partners are making great advancements in developing and field-testing innovative energy solutions. The United Kingdom Ministry of Defense recently announced plans to deploy an innovative battery technology for radio systems that will lighten the load for troops on the front line by nearly 12 kg. Alternative energy sources – like the solar-powered communication systems employed by the U.S. Marine Corps India Company 3/5 in Helmand Province – also increase capability of forces operating in austere environments by reducing the need for fuel resupply and improving operational flexibility. Conceivably, some of the technologies deployed with troops today could be left behind to aid local Afghans in the future (such as solar-powered water purification systems). Ranging in application from large-scale operating bases to individual Service members, the proven energy solutions currently available to NATO forces should be fielded at scale through a collaborative effort to improve mission effectiveness in theater.

Beyond powering NATO forces directly, energy also is a useful tool for building local capacity and promoting economic development in Afghanistan. According to the OECD, only 15.6 percent of the Afghan population has access to electricity. Without electricity, communities lack basic services, such as lighting and refrigeration, which affect the health and livelihoods of citizens. In Afghanistan, the widespread practice of burning biomass (such as animal dung or straw) for heating and cooking degrades air quality and causes harmful respiratory diseases, particularly in children. These energy poverty issues are interrelated with access to safe drinking water, sanitation, and food. Cross-sector energy solutions can have multiplier effects touching health, education, and economic development. For example, biogas digesters convert human and animal waste – which could otherwise contaminate drinking water sources – into methane gas (for cooking and heating) as well as fertilizer for crops, thus addressing energy, sanitation, and health issues simultaneously. ISAF recently marked the completion of a biogas plant in Kabul, and the U.S. Army Corps of Engineers has the capacity to facilitate the construction of more biogas digesters across the country. As part of its counter-insurgency strategy, NATO forces have the opportunity to use energy as the central means for an integrated approach with development agencies to provide these basic services and improve the lives of local Afghans.

As NATO forces posture for a drawdown in the coming years, all partners would benefit from a joint, strategic approach to energy. Emphasis should be placed on fielding simple and enduring energy solutions that bring improved capability to troops today and can be left behind for local Afghans in the future. The foundation of this process requires allies to exchange energy-related data, lessons learned, and best practices from existing pilot programs in theater. Such a foundation will enable NATO forces to identify and subsequently deploy at scale the most promising energy solutions. A NATO-wide energy initiative of this kind in Afghanistan can fundamentally enhance mission effectiveness at multiple levels, from overcoming enemy insurgents to improving human development for local communities. As budgets tighten and allies strive to achieve a durable peace, energy is an essential tool for NATO success in Afghanistan.

Rachel Posner is a policy and programs analyst in the office of the Assistant Secretary of Defense for Operational Energy Plans and Programs. Previously, she served as a fellow in the Energy and National Security Program and as the assistant director of the Global Water Futures Project at the Center for Strategic and International Studies (CSIS).The views presented are those of the author and do not necessarily represent the views of DoD or its components. This essay was first published at Atlantic Community. Photo credit: Maj. Paul Greenberg/US Marines.