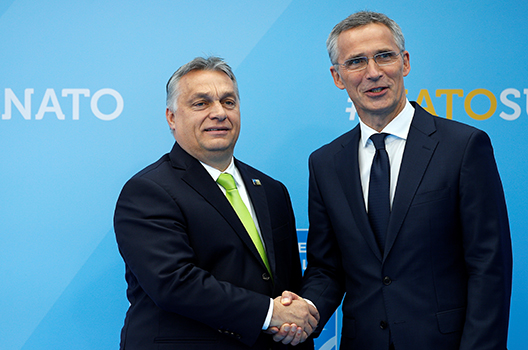 A casual consumer of news reading sensational headlines about Hungary would question whether the United States and Hungary are even allies. US officials are criticized for a policy of “appeasement” when they meet their Hungarian counterparts. It is therefore significant that Secretary of State Mike Pompeo is visiting Hungary this week as part of a concerted plan to engage Central Europe.

Concerned about democratic backsliding, some argue a policy of malign neglect is merited. Such an approach is both ineffective at addressing those concerns and self-defeating for the United States. A policy of shunning and shaming neither advances US interests nor values in an era of great power competition with authoritarian kleptocracies.

As Hungary celebrates its 30th anniversary of the fall of communism and 20th anniversary of accession to NATO, we need to take stock of why Russia and China have made headway in the region and adopt a more effective US approach to defending our allies, interests, and values.

In the wake of the fall of the Berlin Wall, Hungary, and all of Central Europe forged a special relationship with the United States, as Americans assisted formerly captive nations’ transformations first into free market democracies, then into allies in NATO and members of the European Union, and later as coalition partners in battle. Indeed, for many us – myself included – the US relationship with our newest allies became our special relationship, no offense to our British allies.

But by 2010, things looked different. The United States’ “Russia reset” and an American reversal on missile defense plans in the region caused some in Hungary to ask whether US support was ephemeral.

The last Secretary of State to visit Hungary was seven years ago in 2011. When Secretary Pompeo hosted Foreign Minister Péter Szijjártó in 2018, it was the first such ministerial meeting in six years.

We witnessed a decade in which the region seemed all too normal and strategically quiet. As a result, US attention shifted, transatlantic bonds receded, American engagement in the region ebbed, governments began to hedge their bets, and then electorates, strained by fallout from the financial crisis, began to question the promise of a Europe whole and free.

Against this backdrop, Vladimir Putin and a revanchist Kremlin dropped all pretense of pursing a strategic partnership with the West, and then acted to halt the eastward democratic advance, undermine our post-Cold War gains, gain leverage and influence over Central Europe, and sow mistrust within democratic societies.

More recently, China has emerged as a serious actor in the region with its debt-book diplomacy.

We must recognize that the great challenge of the 21st century will be the competition between the free world and authoritarian corrupt state-led capitalism, chief among them China and Russia. In the short-term, we see so much that divides the US from our allies – Iran, trade, climate, rhetorical flourishes from our leaders – but we need to remain focused on this great, emerging global struggle in which democratic societies like the United States and Hungary find ourselves in the same camp. What unites all of us in the transatlantic relationship is that we comprise the spine of the free world. Too often, we don’t recognize this while our adversaries certainly do.

The goal of US policy must be to keep our allies as our allies. It sounds straightforward, but in an era of geopolitical competition, America’s friends and allies are its best competitive advantage. This means we shouldn’t attack our friends and expect them to remain our friends. Rather than driving them away, we must keep them close. And this means we must show up. Meet our allies. Consult them. Even as we challenge them to do more.

Hungary is in a region of strategic interest to the United States and should be among our natural allies. Since 1990, as the United States supported the region’s aspirations, the region stood by Washington on very tough decisions. Located historically between the once great powers emanating from Berlin, Moscow, and Istanbul, this part of Europe finds security and strength through a strong relationship with Washington. The United States also has strong strategic interests in a region that has been a source of geopolitical conflict repeatedly forcing Americans to come to Europe’s rescue.

At the same time, we need to understand better what’s happening in Hungary. There is a tendency in the American press to conflate political views on issues such as immigration and social conservatism with the state of Hungarian democracy. We must distinguish between rule of law or corruption and questions of social policy and border security. They are different.

As friends, we must be able to have frank, private conversations about real concerns. US Assistant Secretary of State Wess Mitchell, a friend of the region and speaking at the Atlantic Council last year, used strong words: “we expect those whom America helps to not abet our rivals whether through energy deals that make the region more vulnerable to the very Russia that these states joined NATO to protect themselves against, or networks of corruption and state-owned enterprises that rig the system in favor of China and Russia.”

At the same time, we must keep values at the center of our alliance. What makes the West the West after all is the idea of not just the nation, but the free nation and their free peoples. Democratic practices and institutions, from free media to independent judiciaries, are central to who we are and why we are allies. National sovereignty is an important value, but it is not an absolute. At the foundation of the Western political tradition is the conviction that rulers are not absolute but are answerable for their fidelity to higher values. And American officials should raise concerns based on our core beliefs and shared identity as members of the Western family of thought and nations.

Rather than shun and shame an ally like Hungary, we can pursue practical steps to bolster the US-Hungarian relationship advancing our interests and values together.

First, we need more permanent American engagement in the region, politically, economically, and militarily. The uptick in political-level engagement should continue. The permanent stationing of US forces in Central Europe, in Poland and Romania, for example, would help anchor our alliance with the entire region, including Hungary.

Similarly, US leadership on the Three Seas Initiative is designed to increase US economic investment in critical infrastructure projects to better integrate the region. Hungary, in turn, can welcome American engagement, while working with us to push back Russian nefarious influence and resist the siren song of easy Chinese money.

Our partnership needs to get serious on energy. Hungary’s energy dependency on Russia remains perilously high. This is a national security issue for Hungary first and foremost. But we often blame Hungary for an energy security situation that has resulted from being left with bad choices in the wake of market failures or US and EU energy diplomacy falling short. The United States needs to flex its diplomatic and economic muscles to help complete long-stalled efforts to bring energy supplies from the Black and Adriatic Seas to Hungary.

Our two nations should bolster our defense ties, most immediately through the conclusion of a critical Defense Cooperation Agreement, which would provide a framework for US forces to exercise in and transit Hungary. As Hungary moves toward its 2 percent of GDP NATO defense spending commitment, we should be helping Hungary divest of Russian military equipment and the maintenance contracts they require. The field experience our soldiers forge together remains critical, with 700 Hungarians troops alongside US soldiers in the Balkans, Afghanistan, and Iraq.

Budapest should also be working with Washington on a common strategy to help anchor Hungary’s neighbors in the West – namely Serbia and Ukraine. Nothing would guarantee Hungary’s security and the security and prosperity of ethnic Hungarians in Vojvodina or Subcarpathia more than democratic neighbors integrated in the West and its institutions. We therefore need to resolve the impasse between Budapest and Kyiv over language laws. We must not let Putin’s Russia drive wedges between friends.

Furthermore, Hungary is an outsized partner for the United States on homeland security, as Budapest has unprecedented data on refugees and migrants that traversed its territory, and a strong record of exchanging data to enhance air travel and border security.

Over 100 million people in Central and Eastern Europe overcame tyranny and now live securely in freedom. We cannot squander our accomplishments. That’s why the State Department’s re-investment in the region, to include people to people exchanges and assistance on viable business models for independent media, is so welcomed.

As Ambassador Dan Fried has said, “Scolding is a waste of time. Handwringing is lazy. The United States needs to show up.”

This article is adapted from remarks delivered at the Hungarian American Coalition’s 27th Annual Mikulás Dinner on November 30, 2018.