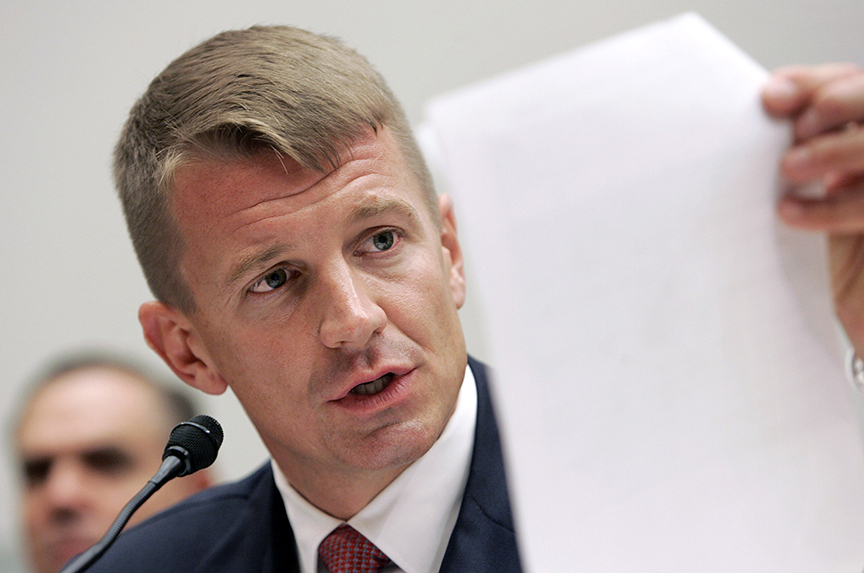 Erik Prince, pictured here testifying before the House Oversight and Government Reform Committee in Washington on October 2, 2007, has proposed that the US government rely more heavily on private military contractors in Afghanistan. Prince is the former chief executive officer of the controversial security firm formerly known as Blackwater. (Reuters/Larry Downing)

A proposal that would have the United States rely more heavily on private military contractors instead of US troops, and install what would essentially be a US viceroy in Afghanistan, is an example of “reckless foreign policy,” according to Sean McFate, a nonresident senior fellow in the Atlantic Council’s Africa Center.

Erik Prince, the founder of the controversial private security firm Blackwater and the brain behind the proposal, says it will reduce the cost of America’s longest war and allow the United States to shrink its troop presence in Afghanistan.

McFate agrees that what the plan has going for it is that contractors are cheaper than US troops. Nevertheless, he added, there are serious problems with Prince’s proposal, the first being that it is “deeply un-American.”

“Using a neocolonial model to ‘fix’ Afghanistan is preposterous,” said McFate, a former private military contractor who has worked in Africa.

“Soldiers have fought and died for democracy in Afghanistan not to see it flip over to some viceroy with absolute authority over the sovereign state of Afghanistan, backed by a mercenary army,” he said, adding: “It would send a dangerous signal to the rest of the world that hiring mercenary armies at this scale is OK as the superpower [the United States] did it.”

The proposal from Prince—the brother of US Secretary of Education Betsy DeVos and a former private military contractor—would see 5,000 private military contractors or mercenaries plug gaps left by departing US troops in Afghanistan. Prince claims his plan would cut the cost of the war from an annual estimated cost of $45 billion to less than $10 billion. He has drawn inspiration from the East India Company, which, in the middle of the eighteenth century, set the stage for nearly 200 years of British colonial rule in India.

In June, Trump gave Mattis the authority to deploy more US troops to Afghanistan. That number is believed to be around 4,000. An estimated 9,800 US troops are currently based in Afghanistan.

Contending that ordinary Afghans’ lives have not been notably improved by more than fifteen years of a US presence in Afghanistan, McFate said it is time for the United States to pull out. “It is best for everyone that we find an honorable way to leave,” he said.

Sean McFate spoke in an interview with the New Atlanticist’s Ashish Kumar Sen. Here are excerpts from our interview.

Q: What are the pros and cons of Erik Prince’s proposal for Afghanistan?

McFate: Let me start with the pros, because there are pros. Military contracting, or mercenaries, is an increasing trend that few people know is happening and can have profound impacts for the twenty-first century. Erik Prince is trying to get in front of that to use it for US advantage.

Contractors can be cheaper and better than US troops with the right preconditions. But that’s where [Prince] and I stop on agreement. I say this as a former military contractor, just like Prince, who worked for years in Africa and elsewhere.

There are serious problems with Prince’s proposal. The first is that it is deeply un-American. Using a neocolonial model to “fix” Afghanistan is preposterous. Americans fought a Revolutionary War against King George. Soldiers have fought and died for democracy in Afghanistan not to see it flip over to some viceroy with absolute authority over the sovereign state of Afghanistan, backed by a mercenary army. It would send a dangerous signal to the rest of the world that hiring mercenary armies at this scale is OK as the superpower did it. It is reckless foreign policy.

Q: As the Trump administration reviews its Afghanistan policy, what in your mind should be the key components of a strategy to break the status quo?

McFate: The current model is broken. It was tried by [former US President Barack] Obama in 2011 with the surge. That didn’t work, so I don’t know what more troops helps to achieve. Then there is the mercenary model which would be the worst solution for Afghanistan.

I think we should leave Afghanistan. I don’t think we have made life for Afghans demonstrably better in fifteen years, and arguably, we have made it worse. Nor is the threat of terrorism anchored to Afghanistan. It is spread throughout Africa, the Middle East, and South Asia. It is best for everyone that we find an honorable way to leave.

Q: Under what circumstances is the use of private military contractors advisable? Can you describe some specific situations in which these contractors have played a positive role in ending or avoiding a major conflict?

McFate: The first thing about mercenaries is that they are the second-oldest profession. Their disappearance from the world stage for 200 years is anomalous; their return is normal.

In recent years, you could argue that mercenaries helped US missions in Iraq and Afghanistan. In World War II contractors filled only 10 percent of the deployed force in war zones. Now it is 50 percent or higher. The vast majority of these contractors are not mercenaries, but those that are armed, with some notable exceptions, supported the US mission. Without these contractors the United States would have had to withdraw from these countries and would have had to have a national draft.

If mercenaries can be controlled—this is a big if—they can do things like augment UN peacekeeping missions. I helped stop a genocide in Rwanda and Burundi in 2004. We demobilized warlord armies in West Africa and created militaries that observe the rule of law.

Mercenaries are like fire: they can be a force for good or evil depending on how you use them.

Q: How about a time when private military contractors made things worse?

McFate: The first is Erik Prince’s own company, Blackwater, in 2007 in Nisour Square [Editor’s note: Blackwater security personnel were involved in a shooting in Baghdad’s Nisour Square on September 16, 2007, that left fourteen unarmed Iraqi civilians dead and more than two dozen others wounded.]. The Afghan model he is proposing multiplies the possibility of Nisour Square by a hundred because so far he has not explained how he is going to do any of this safely. It is just a big hand wave and an assumption. Nobody in the White House is asking any hard questions that we are aware of.

Q: To your point, does handing the war over to contractors who profit from conflict make it harder to end the fighting?

McFate: The answer is yes. We think of war as purely the realm of the public sector with national armies, patriotism, honor, and public policy. When you introduce mercenaries, you introduce the logic of the marketplace. New strategies emerge because now you are creating a market for force with mercenary supply and demand that doesn’t want to go out of business.

Q: Why are mercenaries increasingly used in conflict zones?

McFate: Mercenaries are a new type of conflict entrepreneur. They were catapulted from the shadows during the US wars in Iraq and Afghanistan because the United States used them so much. The faulty assumption that US planners had was that when we are done with private military contractors they will simply go home like cheap army reservists. But they are profit-maximizing entities. What they did after Iraq and Afghanistan is that they dispersed around the world looking for conflict markets. We’ve seen them used in the extractive industry—like oil and gas and minerals; they are used by shipping lines that have ships go through pirate-infested waters; Russia used mercenaries in Ukraine and Syria because they offer plausible deniability; Nigeria hired them secretly to push out Boko Haram in 2015, which they did successfully when the Nigerian military could not; Abu Dhabi hired Latin American ex-special forces to go into Yemen to fight Houthis; we have seen reports of jihadi mercenaries from Uzbekistan working for Al Nusra Front in Aleppo.

The centers of mercenary activity are Irbil, Iraq, and Kampala, Uganda. The conflict market in Irbil is [the Islamic State of Iraq and al-Sham’s so-called] caliphate; in Uganda it is Somalia.

Q: While there is the luxury of plausible deniability, doesn’t the use of private military contractors blur battle lines and increase the risk of a larger conflict that would draw in nation states?

McFate: There is a huge risk of that happening. For example, in 2008, I was called in by an NGO [non-governmental organization] to assess a situation. The actress Mia Farrow was going to hire Erik Prince’s Blackwater to do a humanitarian intervention in Darfur [in western Sudan] to stop the genocide. She apparently approached this NGO to ask them to do a name-and-shame campaign to goad the world into a robust UN peacekeeping mission in Darfur. Blackwater could have done that. The question was could that suck the United States into a war in Sudan? How do you prosecute this under laws of war? Also, mercenaries can flip sides, they can engage in military activity. So when you consider Prince’s Afghanistan model, they could simply become the biggest warlord in Afghanistan. There is no safety [or] controls, and that is a prerequisite for using mercenaries.

Q: You have a new book, Deep Black, which provides a fascinating account of the secret lives of private military contractors. Could you provide a brief takeaway? And were you surprised by anything that you learned while doing research?

McFate: The book is part of an international thriller series. It started as a memoir. My agent said “You should change to fiction so you don’t get sued to death!” So, Tom Locke was born. The book tries to be as accurate as possible to look into the world of mercenaries and also modern warfare. The key distinction of modern warfare is plausible deniability and covertness. This book takes you deep into the ISIS caliphate where Tom Locke is hunting a rogue Saudi prince.

What I learned from people I know inside the caliphate—Mosul and other places—about some of the gritty details about life in the caliphate was shocking.

McFate: One is the degree to which Iran is already in the caliphate fighting with its Quds Force and Gen. [Qasem] Soleimani. The other was that how in many ways this is an existential war that is 1,400 years old. We in the West view the Middle East as a problem amongst warring states, but it is much deeper than states. Those who view this purely through the lens of Westphalian states will be forever perplexed. Politics in these regions are far more ancient and complex than even expert thinkers give credit for.

Q: What then is the correct approach to the region?

McFate: In my opinion, the correct approach is humility about what we can achieve in places like the Middle East. Certainly, the idea of nation building is preposterous. Ultimately, what we are seeing in the Middle East and other places around the world is an evolution that we cannot stop as “the West” but should rather learn to live with and shape, not seek to control.