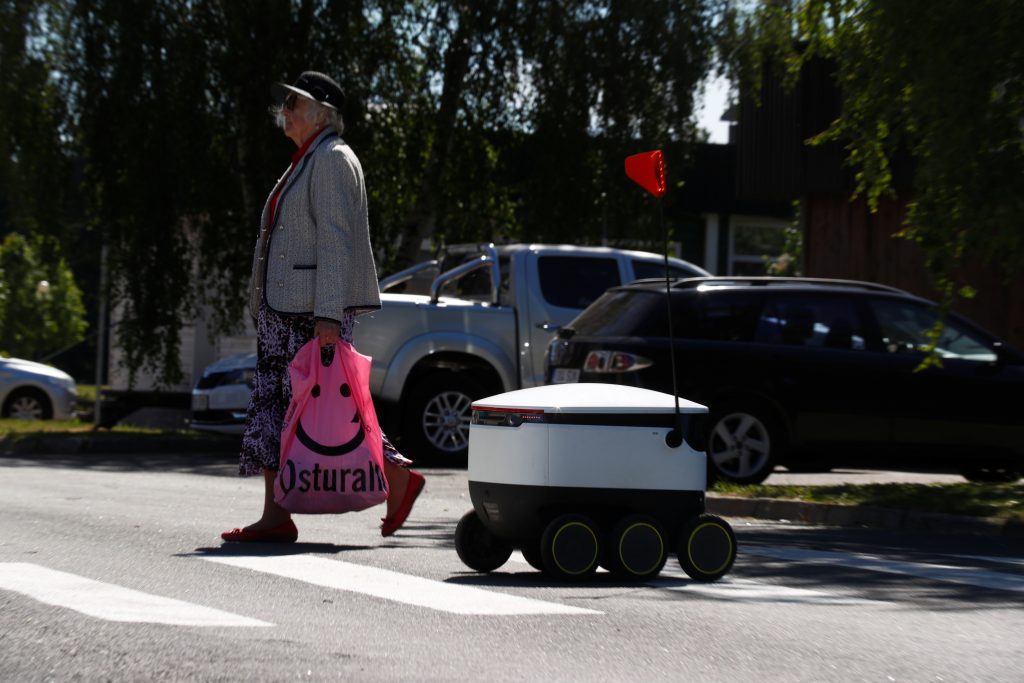 A delivery robot stops at a crosswalk. Cars begin to approach. Does the robot have the right of way, like a pedestrian? In Estonia, the car gets preference—but some human drivers wait, unaware of the rule, causing delays. And what happens when an adversarial nation owns the technology behind those robots and uses them nefariously?

That case study was offered by the president of Estonia, Kersti Kaljulaid, at an Atlantic Council Front Page event on Wednesday, and its ramifications extend far beyond a mere traffic jam. Enforcing traffic laws (and other well-meaning policies) requires effectively informing the public about these measures. And who owns the technology especially matters, with foreign nations like China able to not just weaponize the data they gather but also influence the actions of the products they make. Imagine the chaos that would ensue if bad actors told those robots to disregard Estonian law and cross busy intersections.

As one of the world’s most advanced governments in the digital domain, Estonia is among just a few countries to tackle complex contemporary problems like this one. Under Kaljulaid, 51, who was elected in 2016 as the country’s youngest and first female president, Estonia became the world’s first nation to allow citizens to pay taxes and vote online through its nearly universally adopted electronic identity (e-identity) program. In September, Estonia will host the Tallinn Digital Summit to push forward the conversation around online policies across the globe.

Kaljulaid spoke about the concept of “trusted connectivity”—making sure critical digital and physical infrastructure linking those robots and underpinning national economies is built by democratic allies and partners in close collaboration with the private sector—alongside Anne Neuberger, deputy national security advisor for cyber and emerging technology in the Biden administration. Introducing the conversation, Ambassador Paula J. Dobriansky, vice chair of the Atlantic Council’s Scowcroft Center for Strategy and Security, pointed out that “China has made massive global infrastructure investments through its Belt and Road Initiative, influencing global actors and unlocking sensitive data with potential vectors for coercion, disruption, and attack.” As the Group of Seven (G7) nations back infrastructure projects like Build Back Better World and standards embodied by the updated Blue Dot Network, “trusted connectivity offers a viable framework to counter Chinese tech and infrastructure investment,” Dobriansky said.

Below are some of the key takeaways from the discussion about how democracies can work together and with private companies to take on ambitious projects and promote global security, plus the future of connectivity in a world where technological competition presents tremendous geopolitical risks and opportunities.

The Estonian president and Anne Neuberger, US deputy national security advisor for cybersecurity and emerging technology, appeared at the Atlantic Council to discuss the world’s digital challenges ahead. Here’s the full transcript.

Building trust in a dangerous world

Can I see some ID?

Estonian President Kersti Kaljulaid and US Senator Jeanne Shaheen talked about how the US and EU should engage Russia, craft a transatlantic approach to Afghanistan, lead a strategy to mitigate climate change, and more.

Collective cybersecurity for the Three Seas

In Central and Eastern Europe’s Three Seas region, twelve countries have joined together to invest in critical infrastructure projects and increase interconnectivity on energy, infrastructure, and digitization efforts along the way. To strengthen the resilience of these technical investments and better bind together the defensive cybersecurity operations of these societies, Three Seas member states should establish a regional hub for cybersecurity together with key private sector partners.