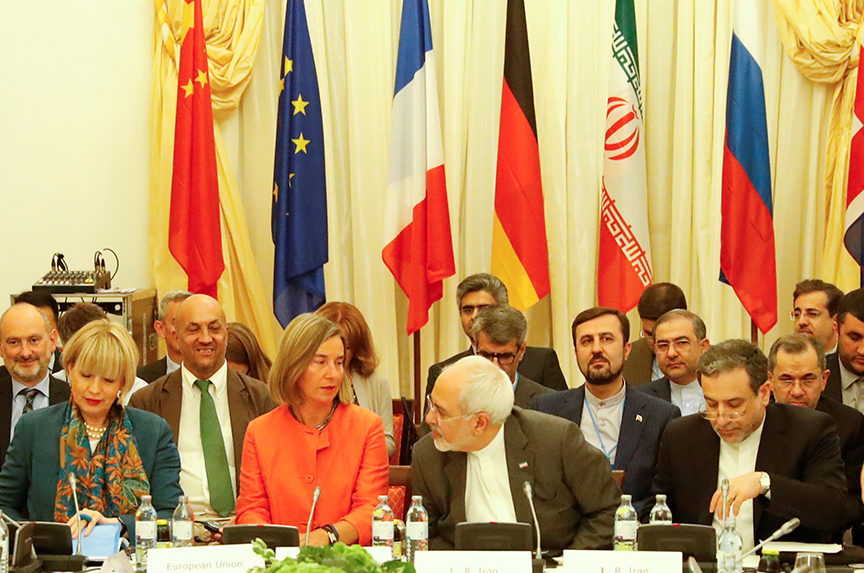 You would not know it from reading the news, but the Iran nuclear deal is still alive. The Europeans, however, are faced with an impossible task: to preserve an international agreement that cannot survive without Washington’s backing in the face of an aggressive US posture toward Tehran.

In May, US President Donald J. Trump pulled out of the nuclear deal calling it “decaying and rotten.” The United States next re-imposed a first batch of economic sanctions on Iran in early August. Multinational companies have started leaving Iran even before the November 4 deadline by when Washington will enact a renewed oil and gas embargo on the country. All this even as the United Nations’ nuclear watchdog, the International Atomic Energy Agency (IAEA), last week confirmed that Tehran continues to broadly abide by its obligations under the 2015 deal. That confirmation coincided with a meeting of the European Union’s foreign ministers in Vienna to discuss Europe’s position toward Iran.

As for what Europe’s approach should be toward the United States, German Foreign Minister Heiko Maas recently described it as: cooperate wherever possible, fill the vacuum that a receding superpower creates, and stand your ground when there is profound disagreement. The Europeans are trying hard on all three fronts but without a real chance of succeeding.

Let’s start with the most obvious point—whether the European Union (EU) can stand firm on the Iran nuclear deal itself. Indeed, Brussels has not only vowed to defend its companies from US sanctions for doing legitimate business with Iran, it has also passed the respective legislative act in time for the re-imposition of US sanctions. European policymakers may be hoping they do not actually have to apply this “blocking regulation,” just as in the late 1990s when the EU and the United States both agreed to waive their mutual sanctions. Ultimately, recovering fines imposed by the US Treasury on European companies from the US government is highly unlikely; the fact that the European Commission published detailed guidelines as to how his could be done regardless, at least shows that the EU means business. This notwithstanding, no legal act can prevent companies with a stake in the US market to take the rational decision to prioritize that business and leave the Iranian market, as the likes of Airbus, Maersk, Peugeot, Siemens, and Total have already done.

Europe, in short, does not have the political power to defend the Iran deal with Washington gone rogue on its commitment. It cannot keep up economic ties against US pressure, much as policymakers in Iran demand precisely that. Still, trying its best to do so is worthwhile also in political terms and may in the long run help fill the vacuum created by the uncooperative partner. Opening up alternative payment channels that are not subject to US sanctions, thus making any dollar transaction impossible, is an important element of a broader strategy toward financial independence. It is not only relevant with regard to Iran but also toward Russia, where the EU may not want to follow any and all US policies but is currently compelled to do so. Similarly, providing €18 million for private sector development in Iran, for, in particular, small- and medium-sized businesses, is “pistachios” compared to the billions of dollars Tehran loses in other trade. Yet by doing so the EU shows a tangible commitment to maintaining commercial relations with Iran, a move that has—despite the negligible sum involved—immediately drawn the ire of policymakers in Washington.

Which leaves the first point about continued transatlantic cooperation, desirable whenever feasible. On Iran, however, there is currently no way for the two sides of the Atlantic to come together: the three European signatories of the deal (France, the United Kingdom, and Germany) had tried to find common ground with the United States earlier this year on areas of mutual concern, such as Iran’s missile program, its involvement in the region’s conflicts, and a continuation of its nuclear commitments after 2025—only to be snubbed by Washington’s unilateral withdrawal from the deal. The current US “strategy,” a fourteen-point list of demands for Tehran’s submission, seems to have only one intention: to destabilize and ultimately bring down the Islamic Republic. Much as the Europeans would similarly wish for a free and democratic Iran, they are unwilling to collaborate on this approach—and rightly so.

Yet beyond deploring Washington’s (deplorable) go-it-alone attitude, the EU should come up with proposals of its own. Whether it is the wars in Syria and Yemen, the situation in Iraq or Lebanon, or indeed the conundrum that Europeans still like to refer to as the “Middle East peace process”– only if the EU contributes both ideas and means does it stand the chance to be taken seriously by its US partner as well as by regional actors (and, obviously, by Russia too).

The nuclear deal, despite its multilateral setting and international legitimacy, has ultimately been about Iran and the United States coming together on at least one crucial issue. After Washington’s withdrawal, its fate will not be decided in European capitals, in Beijing or Moscow, but in Tehran: it will be “alive” for as long as Iran complies with its terms. The EU is a supporting actor, if also a crucial one: it cannot neutralize one party’s willingness to scuttle the deal, neither by blocking US actions nor by compensating Iran for dwindling business. Yet it can—and must—uphold its part regardless, all while actively extending its role beyond the nuclear file.

Cornelius Adebahr is a nonresident fellow at Carnegie Europe. He is the author of “Europe and Iran: The Nuclear File and Beyond” (Routledge 2017).