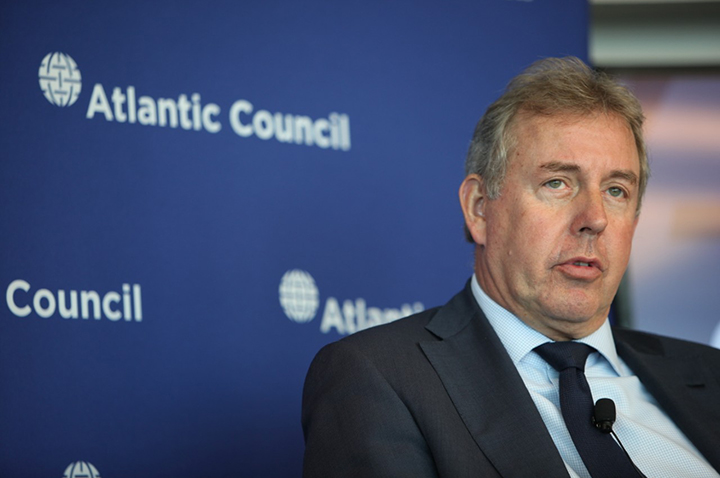 Europe is facing a “stress test” in the form of challenges from a “belligerent” Russia, the Islamic State of Iraq and al-Sham, a historic influx of migrants, high rates of unemployment, and low levels of trust in European institutions, the United Kingdom’s Ambassador to the United States, Kim Darroch, said at the Atlantic Council on May 25. Given this reality, he added, it is important for the UK to remain in the European Union.

“One has to recognize that Europe is facing some exceptionally challenging times,” said Darroch, who has previously served as national security advisor to British Prime Minister David Cameron and the UK’s permanent representative to the European Union. He spoke in a conversation moderated by Atlantic Council President and CEO Frederick Kempe.

British voters will participate in a referendum on June 23 to decide whether the UK should leave the EU. While Cameron, backed by twenty-three of his twenty-eight cabinet members, is leading the Remain campaign for the UK to stay in the EU, five cabinet members are in favor of the Leave campaign. Justice Secretary Michael Gove and former London Mayor Boris Johnson are among the more prominent leaders of the Leave campaign.

“The PM has been clear, the British government has been clear, that we think we are stronger, safer, and better off inside the European Union,” said Darroch. “Access to the single market; safer because we can work with our partners against crime and terrorism; and stronger because this gives us a stronger position in terms of international challenges…it is a multiplying effect for British foreign policy,” he added.

Further making the case for the UK to remain in the EU, he noted: “The range of benefits we get from European membership, whether economic or in terms of security or in terms of international reach and influence, are so comprehensive and so important that the case for remaining in is overwhelming; it is extremely strong.”

But the strongest argument for the UK to remain in the EU is economic, he added.

The UK Treasury recently warned that the British economy would suffer a “profound shock” if the country left the EU. Article 50 of the Lisbon Treaty gives any member state that has decided in a referendum to leave the EU two years to negotiate the terms of its departure with the other twenty-seven members of the bloc. The uncertainty surrounding the UK’s relationships with its trading partners during this time would delay spending and investment, the Treasury warned.

The UK’s standing on the world stage would also take a hit. Thirteen former US secretaries of state, secretaries of defense, and national security advisors recently signed a letter that says the “UK’s place and influence in the world would be diminished and Europe would be dangerously weakened” if it were to leave the EU.

Nevertheless, recent polls show a razor-thin margin between support for the Remain and Leave camps.

Noting a depletion in public trust in European institutions, Darroch suggested three steps to turn the European Union into an engine of growth and ultimately restore trust. First, the single market should be completed. The UK believes the single market is a “great contributor to European prosperity, but it is incomplete,” said Darroch, noting this incompleteness in the digital single market and the service economy. Second, the EU should place a greater emphasis on completing trade deals such as the Transatlantic Trade and Investment Partnership (TTIP) with the United States, and deals with countries such as India, China, and Japan. And third, the regulatory burden on businesses must be lessened.

The UK has been a champion of EU sanctions on Russia following Russia’s annexation of Crimea in March of 2014 and support for separatists in eastern Ukraine. Darroch said the UK believes that the sanctions, which come up for renewal at the end of June, should be extended. The twenty-eight-member EU has to unanimously approve an extension. The ambassador said “pretty much everyone in the European Union, with varying degrees of enthusiasm” are expecting sanctions on Russia to be renewed. He added that he was not aware of a “big movement to dismantle the sanctions.”

EU officials have linked an easing of sanctions to Russia’s compliance with the terms of the Minsk agreement that sought to end hostilities between Ukrainian forces and the separatists. Both sides have been accused of violations and accuse each other of failing to honor the ceasefire agreement, but Darroch said it is the separatists who are mostly to blame.

The agreement, which calls for a ceasefire and the withdrawal of heavy weapons by both sides in the conflict, also requires the Ukrainian government to undertake constitutional reform and hold a dialogue on conducting elections in the eastern regions of Donetsk and Luhansk.

Quite simply, “the Minsk process has not delivered,” Darroch said.

US Defense Secretary Ash Carter has described Russia as a pre-eminent threat to US national security interests and NATO has drawn up plans to deploy four combat battalions in Poland and the three Baltic States: Estonia, Latvia, and Lithuania. The Alliance also intends to conduct major military exercises in Poland and US military officials earlier in May inaugurated a missile interceptor site in Romania, which will be part of a larger missile defense shield. Russia has responded with a pledge to deploy three divisions of roughly 10,000 troops each to its western and southern flanks by the end of this year.

Europe’s preoccupation with multiple challenges has led to speculation that Russia may seek to exploit this distraction and take actions that could precipitate a nuclear war.

Alexander Richard Shirreff, a retired British General who served as deputy supreme allied commander Europe from 2011 to 2014, ominously warns in his new book that Russia, in a bid to avoid NATO encirclement, will seize territory in eastern Ukraine, create a land corridor to Crimea, and invade the Baltic States.

Retired US Adm. James Stavridis, a former supreme allied commander Europe, writes in his foreword to Shirreff’s book: “Under President [Vladimir] Putin, Russia has charted a dangerous course that, if it is allowed to continue, may lead inexorably to a clash with NATO. And that will mean a war that could so easily go nuclear.”

Darroch said it is important to hold Putin to the promises he has made, including implementing the Minsk agreement and ending hostilities in Syria.

Meanwhile, defense spending by NATO member states, in particular the fact that only five—including the United States and the UK—of the twenty-eight member states meet the goal of spending two percent of their GDP on defense, has become an unusual talking point in the US presidential campaign. Donald Trump, the Republican Party’s presumptive nominee, has complained that the United States’ NATO partners are “not paying their fair share.”

Darroch said the UK is spending $240 billion—a considerable amount of which is being used to buy US jets and defense equipment—to enhance its defense capabilities and security and intelligence agencies. “I think in the face of a world that looks, particularly around European borders, turbulent and dangerous, I would hope that others would look at the shape of the international landscape and conclude that they should be spending more on defense and security as well,” said Darroch, “whether it is a threat from ISIS or this resurgent, belligerent Russia or all of the above.”