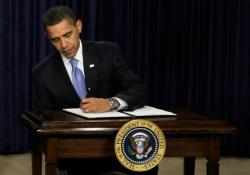 President Obama’s order to “shut secret CIA-run prisons abroad brought renewed calls for their locations to be disclosed as well a fresh denial from Poland, one of two eastern European countries most closely linked to the practice,”  Shawn Pogatchnik and Frank Jordans report for AP

Across Europe, governments uneasy that CIA flights had been carrying terrorism suspects through their airports and air space for years said they were relieved to be heading into a new rendition-free era.

Dick Marty, the Swiss lawmaker who spearheaded the Council of Europe investigations that sought to expose the existence of clandestine interrogation centers in Eastern Europe and Africa, said he expected the truth would come trickling out once the centers were closed. “For some countries, things are going to become very embarrassing. I think European countries would do well now to tell the truth,” Marty said in an interview with The Associated Press.  Marty said he “would be very surprised” if any CIA-run facilities were still operating in Europe, but added “in East Africa, or Morocco, I might assume there is something.” He said Obama’s order granting Red Cross officials access to all secret facilities might prove critical in revealing their locations, both past and present.  “I have deep respect for what’s happening in the United States now. That’s America as we love and respect and admire it,” Marty said.

Poland and Romania are the NATO newcomers that welcomed U.S. military deployments and strongly backed former President George W. Bush’s “war on terror.” One country offered a strong new denial of involvement, while the other kept silent.  “There are no American prisons in Poland,” said Polish Foreign Ministry spokesman Piotr Paszkowski. “We’ve said that many times in recent years and our position and statements haven’t changed, and we have nothing new to say.”

But Zbigniew Siemiatkowski, who directed Poland’s foreign intelligence agency until 2004, expressed doubts that Obama’s moves would make the West more secure from terror.  “It won’t make things easier … one will have to devise new methods, different methods,” Siemiatkowski said, declining to elaborate.

Romanian government officials issued no statement on Obama’s move and did not respond to numerous calls for comment. Romania has repeatedly denied that it allowed CIA secret prisons or permitted the agency to make flights across Romania carrying terrorism suspects.  But a Romanian intelligence official, speaking on condition of anonymity because of the sensitivity of the situation, said Thursday that Obama’s move had made Romanian authorities “worried.”

Secret prisons are so alien to  the Western concept of democracy that it’s hard to justify their use by civilized states, let alone the Leader of the Free World.  Yet, Obama has also ordered the closure of non-secret prison at Guantanamo.  Aside from killing suspected terrorists rather than capturing them, that leaves few obvious options for housing them.