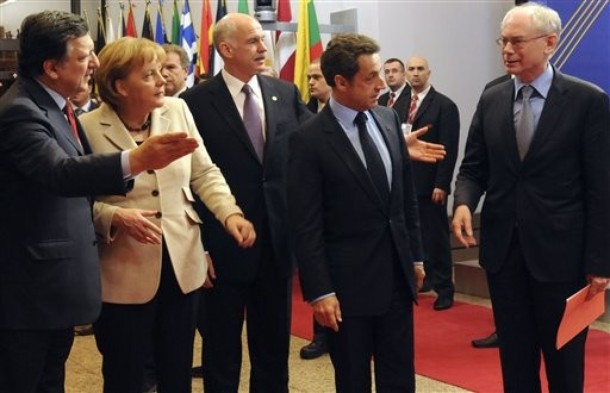 It is difficult to escape the irony of a Europe who, after anxiously awaiting George W. Bush’s exit, is finding the current administration’s relations with the region are far from what was expected.

“Obama disses Europe,” the Washington Post‘s Anne Applebaum writes,  is, “more or less, is how Europeans have described the American president’s decision not to attend the annual U.S.-EU summit, which had been scheduled for May.” Following this announcement, the summit was canceled.

Applebaum defends the President’s decision to “ignore what would certainly have been another boring meeting.” She calls herself a "paid-up Europhile" (she’s married to Poland’s foreign minister, after all) but one “who is thoroughly fed up with Europe’s inability to come up with a united front in its dealings with Russia, a common energy policy, and a more forthright commitment to Afghanistan— or anywhere else.”

The Brookings Institute’s Justin Vaïsse takes it a step further in a NY Times op-ed, declaring,  “It’s a great service that Barack Obama rendered to Europeans. This humiliation probably convinced a few more of the obvious need to finally get their acts together and be more united on foreign policy if they want to have a say in the world — or just be taken seriously. What makes the rebuff particularly stinging is that Europeans know Mr. Obama is right.”

To this, one may add a financial crisis triggered by Greece cooking its books and overshooting budget deficit commitments to the Eurozone that tanked world stock markets and threatens the West’s still more fragile recovery. Indeed, this situation, as now widely reported, raises troubling questions about the future of the Euro.

Applebaum explains the sources of her exasperation with Europe’s “endless procedural debates,” and cites the recent appointment of the EU’s new president and foreign minister, as evidence that major European powers like Germany and France, “don’t want the continent to have a foreign policy at all.” That she argues, would explain why, “They chose two perfectly nice, perfectly bland, and completely unknown politicians, neither of whom has yet said or done anything of any consequence.” Her point: if Europe is not speaking with a unified voice, “why should Obama listen?”

This all seems a far cry from Secretary of State Clinton’s recent  recent speech in Paris where she said, “The transatlantic partnership has been both a cornerstone of global security and a powerful force for global progress.”

For the U.S., the question of how —  or with whom — to conduct diplomacy with Europe has grown fuzzier in direct proportion to the promise of a more functional, unified EU – set against the backdrop of the rise of Asia, particularly China and India as global actors. How much weight does one put on the EU, as opposed to dealing with France, Germany, Italy, etc bilaterally? This tends to vary depending on the issue and how much Europeans have vested the EU in terms of budget and authority, to be their singular voice.

The reality is that more often than not, the EU rather than speaking as the European voice, ends up being one more European seat at the table. The Lisbon Treaty has so far, not altered this confusion.

Underneath all the Euro-angst lies a challenge that is best addressed on both sides of the Atlantic: What does the transatlantic relationship want to be when it grows up?

A November European Council on Foreign Relations (ECFR) report summed up the problem:  “the real threat to the transatlantic relationship comes not from the remaking of America’s global strategy, but from European governments’ failure to come to terms with how the world is changing and how the relationship must adapt to those changes.”

A good example of precisely this portrayal of the current situation was the recent Copenhagen Climate talks. There, Europe, which has been in the forefront of efforts to adopt measures to fight global climate change, seemed to be in effect, benched, as the U.S. and emerging powers hashed out a modest agreement at the 11th hour.

If the present apparent fissure in transatlantic comity sparks some soul-searching on both sides of the Atlantic, the result may be more realistic expectations and a more durable, if redefined, transatlantic partnership that could help shape a complex, still transforming global order.

Robert Manning is a senior advisor to the Atlantic Council.  The views expressed here are solely his own, not those of any U.S. government agency. AP Photo.