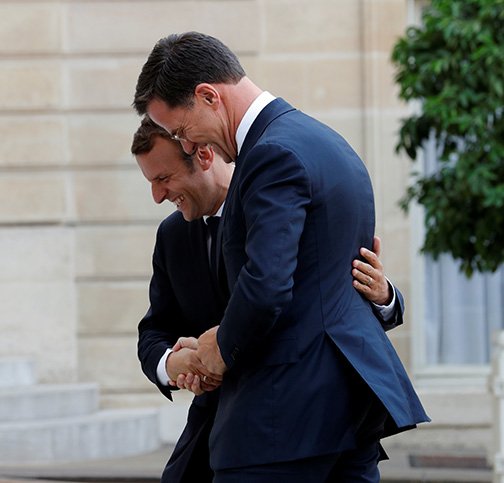 French President Emmanuel Macron (left) and Dutch Prime Minister Mark Rutte, seen here at the Élysée Palace in Paris on August 31, 2017, are expected to form an alliance in the European parliamentary elections in 2019. (Reuters/Philippe Wojazer)

Europe’s two most prominent liberal leaders are teaming up. French President Emmanuel Macron and Dutch Prime Minister Mark Rutte are expected to form an alliance in next year’s European parliamentary elections. With luck, it will make theirs the second-largest party in the European Parliament, which would give them considerable influence over the selection of the next European Commission president.

Macron and Rutte are both relatively young (forty and fifty-one, respectively), ambitious (Rutte is believed to covet the European Council presidency, currently held by Donald Tusk), and in favor of reform of the European Union (EU).

But they differ on what “reform” should mean, which could make theirs an unhappy marriage.

There are other problems. European Parliament elections are proportional, which means Macron will not benefit from anti-Marine Le Pen votes in a second round like he did in the 2017 presidential election. The existing liberal alliance, ALDE, includes Eurosceptic parties from the Baltic states and the Czech Republic as well as ardent federalists, led by former Belgian Prime Minister Guy Verhofstadt. Verhofstadt himself, who is the parliamentary group leader, is a lightning rod for anti-EU sentiment and unpopular with center-right voters. But he may resist being forced out by the Dutch and French young guns.

Rutte has sounded more pro-EU in the wake of Brexit and the election of Donald Trump, but he remains wary of “transfer union”: the permanent subsidization of poorer member states by the wealthy. Like German Chancellor Angela Merkel, and unlike Macron, he generally prefers intergovernmental over federalist solutions. That may sound technical, but it’s a big dividing line between Germany, the Netherlands, and their allies on the one hand and the European Commission and its supporters on the other.

“Intergovernmental” means things are run within the context of the EU but by the member states. That’s how the bailouts of Greece, Ireland, and Portugal were administered and it is how the European Stability Mechanism, the eurozone’s permanent bailout fund, has been set up. Rutte and the leaders of the Baltic and Nordic countries argue for converting the Stability Mechanism into a European Monetary Fund that could finance development in southern and eastern member states—but they would keep it out of the hands of the Commission, which they fear would be more lenient. Macron doesn’t care who manages the money, so long as it gets spent.

His vision is a “social Europe” that works not just for big business and university-educated voters but the little guy as well, who might otherwise be drawn to Eurosceptics like the National Front’s Le Pen. To Rutte’s voters, that sounds like they would once again have to bankroll slack Mediterraneans. Macron has convinced other leaders to rein in the rights of so-called posted workers, who get paid according to the prevailing wage in their home country, which enables them to out-compete low-skilled laborers in the West. Rutte’s priority is expanding the single market to cover all services, which still face different rules and regulations in different countries. Macron wants to harmonize corporate tax rates across the EU. That is a nightmare for the Dutch, whose tax regime is notoriously friendly to foreign companies.

If the liberal “dream team” doesn’t look like a match made in heaven, there is still a reason not to bet against the Macron-Rutte pact: both want to break up the Christian Democratic-Social Democratic duopoly that has ruled Europe by consensus for decades.

The center-right and the center-left traditionally divide up the top jobs between them. The liberals were once kingmakers, but the growth of the far left, Greens, and far right has forced the Christian Democrats and Social Democrats into an ever-closer grand coalition. In the European Parliament, the liberals can do little more than cheer the larger parties on from the sidelines. That could change. Nine of the EU’s twenty-eight member states are ruled by liberals (counting Macron) and they govern in three more. If, for the first time in their history, the liberals manage to best the Social Democrats and become the second political force in Europe, it would redraw the political map in Brussels—and boost Macron’s and Rutte’s profiles.