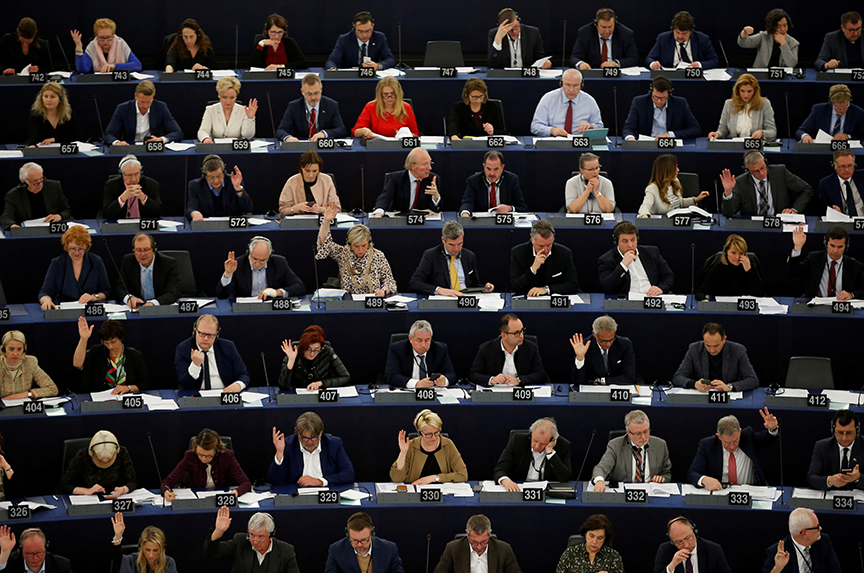 The European Union (EU) is entering campaign season. Between May 23 and 26, every EU member state will vote to elect the 705 members of the European Parliament, one of the key Brussels institutions alongside the European Commission and the European Council of heads of states. Ever since the first direct election by EU citizens in 1979, European parliamentary elections have often failed to excite voters. The EU legislative process is complex and Brussels seems remote to many. National parties have often used the opportunity to recycle losers of national elections or distance annoying opponents. “In Brussels No One Can Hear You Scream” was the title of a Borgen episode in which the fictional Danish prime minister “promotes” her main rival to the European Commission.

This time is different.

The 2019 vote is the most important European election to ever take place. Not only because it takes place in a time of deep uncertainty about the European project, but more so because for the first time the campaign is really about differing visions of what the EU should be. Previous campaigns often focused on domestic issues. When European questions emerged, national agendas trumped differences in visions of Europe. This year though, the election pits ideological coalitions that transcend national interests against one another, a consequence of challenges that have affected the Continent as a whole.

Consider everything that has happened in the five years since the last European Parliament elections in 2014. Geopolitical crises and political upheavals have rocked the Continent. Relations with Russia dramatically deteriorated following the March 2014 annexation of Crimea and ensuing Russian aggression in Donbas. In 2015, the migrant crisis tested Europe’s common borders, sparking a nationalist upheaval. In 2016, British voters chose to leave the EU and Donald J. Trump was elected president of the United States on an “America First” platform. Europeans have been stunned to hear Trump describe the EU as a “foe,” impose economic tariffs on them, and question US security commitments.

Europeans have awakened to a dangerous world and uncertainty on the horizon. In Italy, a founding member of the European Community, a far-right populist party, Lega, is de facto in charge. In Germany, Angela Merkel, who has said she will resign in 2021, won’t be chancellor at the time of the next European ballot. In France, if President Emmanuel Macron fails to implement his reform agenda he will likely be followed by the kind of populist opposition that the Yellow Jackets movement embodied these last few months.

But this could also be a time of renewal for the EU. It’s easy to look at divisions among European leaders as one more sign of the degradation of the European project. But what if this moment could spark the birth of a real and much-needed European public sphere that had been sorely lacking until now? The election result will set the tone for the direction the EU will take and determine the political color of the European Commission’s president. Many observers fear populist forces will strengthen their presence in parliament and complicate any coalition-building efforts between the center-right European People’s Party (EPP), the center-left Progressive Alliance of Socialists and Democrats (S&D), and the liberal Alliance of Liberals and Democrats for Europe (ALDE).

Europe is going through a genuine and interesting debate over its model and identity. Hungarian Prime Minister Viktor Orbán and Italian Deputy Prime Minister Matteo Salvini have called for a stop to immigration (although they have come short on concrete proposals on how to address the situation), push a nationalist narrative, and describe Macron as their main enemy—a title the French president has heartily embraced—because they see him as advocating for solidarity on immigration and further EU integration on defense and the eurozone. Many of these questions have often been left to bureaucrats or avoided altogether. Now they are being put in front of voters.

The challenges that Europeans face can’t be left to lawyers and economists. If pro-Europe activists want to win again they need to understand that populists have brought politics back to Europe; they should embrace it and get in the fight. The paradox is that so far nationalists have been better at using the European Parliament to promote their own agenda. Many remember speeches by Nigel Farage, the former head of the UK Independence Party, deriding European Council President Donald Tusk.

Pro-Europeans should not be afraid to appeal directly to voters. In a bold move earlier in March, Macron decided to directly address the public with an op-ed published in major newspapers in which he called for a “European renaissance.” Macron’s op-ed signaled an important change of tone from Europe’s supporters, too often stuck in defensive mode. (If only voters knew the good the EU does for them!) Macron’s EU renaissance project is somber and lucid. It shows he understands that pro-Europeans can’t just wait Trump out or hope that voters will come to their senses and appreciate all the benefits of Europe. It takes into consideration the EU’s failures, such as ineffective immigration policies or lacking economic coordination.

It could be tempting to look at Britain’s post-Brexit referendum woes and be complacent about the EU, but the chaos in British politics has not suddenly erased the EU’s difficulties. Macron takes Brexit as a cautionary tale in his op-ed and sees the British vote as a symbol of “the crisis of Europe, which has failed to respond to its peoples’ needs for protection from the major shocks of the modern world.”

Arguing for common defense initiatives, stronger border control, and a more integrated eurozone, Macron makes the case that European sovereignty can protect Europeans. Instead of ignoring the populists, he attempts to capture their own vocabulary of protectionism and sovereignty by arguing that these challenges can only be met at the EU level rather than divided and isolated national levels.

Europe needs politics; it needs its defenders to enter the arena and fight for ideas that can’t be left to bureaucrats. Helping Ukraine face Russian aggression, promoting economic solidarity in the eurozone, ensuring European sovereignty, staying open and tolerant to immigration, those aren’t value-free propositions that can be solved by cost-benefit analysis. European politicians need to make the case for these policies in front of voters. They need to push policies that will protect Europe’s citizens. A failure to do so means the populists win, and deservedly so.

Benjamin Haddad is the director of the Future Europe Initiative at the Atlantic Council. His forthcoming book “Paradise Lost: Trump’s America and the end of European illusions” will be published in French by Grasset in April. He was the Washington representative of Emmanuel Macron’s En Marche movement in 2017. Follow him on Twitter @benjaminhaddad.

Image: Members of the European Parliament participated in a voting session in Strasbourg, France, on March 26. (Reuters/Vincent Kessler)