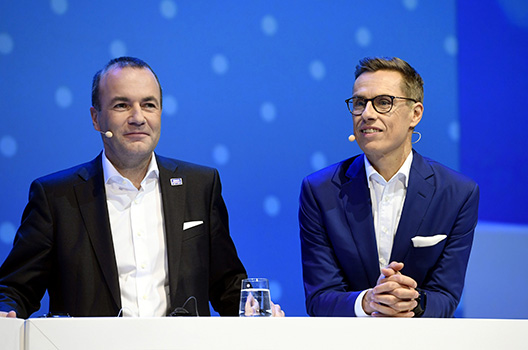 Candidates to lead EPP, German Manfred Weber the Chairman of the EPP Group in the European Parliament and Finnish Alexander Stubb the Vice President of the European Investment Bank attend the debate at the European People's Party EPP congress in Helsinki, Finland November 7, 2018. (Lehtikuva/Heikki Saukkomaa/via REUTERS)

American-style primaries are slowly spreading to Europe. In Spain, parties have opened up their leadership contests to all members, not just delegates. In France, even non-members can vote in presidential primaries. And Germany’s ruling Christian Democratic Union (CDU) will for the first time have a competitive leadership election this year, with three high-profile candidates running to succeed Angela Merkel. In the past, CDU congresses simply rubber-stamped whatever decision party elders had made.

There were dissenters. British Prime Minister David Cameron and Hungarian Prime Minister Viktor Orbán objected to taking the election of the European Commission president out of the hands of national leaders. Other parties argued that the system would cement perpetual EPP rule, since it has placed first in every European parliamentary election so far.

The EPP is soldiering on regardless. Rather than national political leaders electing their lead candidate, hundreds of party delegates are due to select a Spitzenkandidat at a congress in Helsinki this week.

Manfred Weber, the incumbent EPP group leader, is expected to fend off a spirited challenge by the former Finnish prime minister, Alexander Stubb. Weber, a middle-of-the-road conservative, is backed by Merkel. He could become the first German head of the European Commission.

There are substantive differences between the two men. Weber is socially conservative while Stubb is proudly cosmopolitan. Weber is seen as a bridge-builder, but he is also a defender of the status quo. He is not big on agricultural reform (farm subsidies are the EU’s biggest expense) and he has consistently defended Orbán, whose party, Fidesz, is still in the EPP, despite the party’s embrace of populism that has made Stubb and others uncomfortable.

In the United States, such differences would have come out in debates, but, despite Stubb’s pleas, there have been none. Not unlike Hillary Clinton’s nomination in 2016, Weber secured the support of EPP bigwigs in an “invisible primary.” But there was no genuine democratic competition afterwards. The candidates don’t need to appeal to regular party members, let alone center-right voters. The choice will be made by what Americans might call “superdelegates.”

Whoever prevails is not a shoo-in for the Commission presidency. The Spitzenkandidaten process has not been formalized. After the elections in May, national leaders could still nominate someone else. But that person would then have to be approved by the European Parliament.

Much will depend on the balance of power between the three largest parties: in addition to the EPP, the left-wing Progressive Alliance of Socialists and Democrats (S&D), and the centrist Alliance of Liberals and Democrats for Europe group (ALDE).

The EPP and S&D currently rule in a grand coalition and have for most of the European Parliament’s existence. The only exception was the 1999-2004 parliament, when the conservatives and liberals teamed up.

The liberals, who have allied with French President Emmanuel Macron and his party, are hoping to repeat that experiment—with either the center-left or the center-right. They have not nominated a Spitzenkandidat.

The S&D have only one candidate: European Commission Vice-President Frans Timmermans. His fellow commissioner, Maroš Šefčovič of Slovakia, withdrew when the Dutchman entered the race.

The Greens are due to name two candidate: one man and one woman. They held an online primary in 2014. This time the contest will be restricted to delegates. The leading contenders are Bas Eickhout of the Netherlands, Ska Keller of Germany and Petra De Sutter of Belgium.

The most likely outcome is still a Weber Commission with support from the EPP and S&D. But if, as expected, the EPP continues its slow decline, other possibilities could emerge. If ALDE is needed for a majority, it may put forward one of its own, like the popular competition commissioner, and scourge of US big tech, Margrethe Vestager. The S&D, ALDE and Greens could form a “progressive,” pro-European alliance under Timmermans. Although that would likely doom the chances of Dutch Prime Minister Mark Rutte to succeed Donald Tusk as president of the European Council.

Whatever the outcome, it is clear democracy still works differently on this side of the Atlantic.