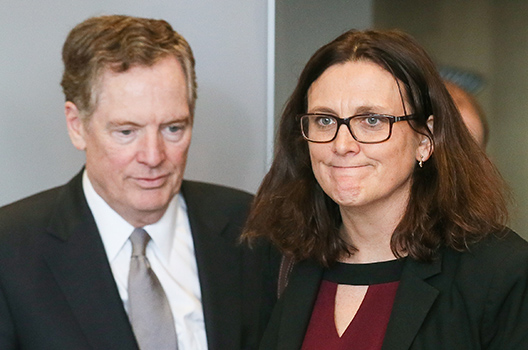 Transatlantic trade negotiators are kicking off 2019 with positive momentum toward avoiding a trade war and implementing last year’s joint statement between the White House and the European Commission. On January 7, the European Commission made key announcements on agricultural trade and steel tariffs that set the stage for ministerial-level talks held in Washington on January 8.

The joint statement separately singled out a mutual interest in resolving “the steel and aluminum tariff issues and retaliatory tariffs” without identifying a mechanism for achieving that goal.

This week, the European Commission signaled its intention through two separate press releases to move forward constructively with negotiations.

The European Commission introduced a statistical dashboard demonstrating that last year’s compromise regarding genetically modified soybeans from the United States and the promise made in July to increase US soybean imports into Europe have had the desired impact. Soybean imports are up 112 percent over the last twenty-seven weeks, most of which includes the period following the July joint statement. The European Commission also noted that Europe is the single-largest export market for US soybeans.  Most importantly, the press release announcing the data indicates that policymakers in Europe expect US soybean imports to increase substantially from this base because the European Union (EU) is in the process of “authorizing the use of US soya beans for biofuels.”

Following a full report filed with the WTO on January 2, 2019, the European Commission also announced its intention to extend by three years (including the period of imposition of the provisional measures) the retaliatory “provisional restrictive measures” imposed on steel tariffs.

While the EU press release highlights the international spillover effects associated with the US imposition of steel tariffs, it also indicates that the EU seeks to apply the extended tariff structure on an erga omnes basis, meaning against imports from all trading partners, with the goal of “maintaining traditional levels of trade in steel in the EU market.”  Interestingly, these moves have not yet been accompanied by heated public rhetoric reviving the trade war dynamic from this summer.

Taken together, these initiatives strongly suggest that European Commission representatives came to Washington this week ready to make concrete progress on two specific areas of high political importance to the United States. They also suggest that US and European trade policy officials both have a third country on their minds: China.

From the US perspective, this comes as no surprise. US trade policy negotiators started out the week in Beijing before meeting with European policymakers in Washington. In both cases, soybeans and steel remain important components in the trade discussions.

The majority of media attention in recent months regarding soybeans trade has focused on the US-China bilateral relationship. China increasingly is an unreliable trade partner for US soybean exports. In November, China purchased zero US soybeans and increased by 80 percent its soybean imports from Brazil, turning up the temperature on the long-simmering “soybean trade war” between the United States and China.  Beijing has since used economic diplomacy and negotiations to implement a “trade war truce” that resulted in resumed purchases of US soybeans by China in December.

EU data released this week and the accompanying press release from Brussels make a subtle but important point that the EU—not China—is the more strategic and reliable export partner for American soybean farmers. More importantly, the EU has now made clear that it is ready, willing, and able to increase its purchases of US soybeans if progress with Washington continues. It will do this by changing a crucial non-tariff barrier (biofuels standards) in order to provide an additional import channel for this crucial American agricultural product. Beyond creating incentives for separate concessions on other issues from Washington, the move will increase US bargaining power with Beijing. US trade officials will know they can take a hard line regarding soybean exports to China because the EU stands in the wings ready to expand its transatlantic economic integration with the United States in this commodity sector.

The steel announcement is more nuanced.  On the surface, seeking WTO authorization to extend steel restrictions by three years signals an EU effort to bargain hard against the national security related Section 232 tariffs in the United States. European policymakers have made clear for months that they have an unwavering commitment to shift US policy away from retaliatory tariffs even as they use those tools themselves in response to US policy moves.

But the EU move at the WTO on steel last week generates a subtler implication for the global trading system. Many view the EU as collateral damage in a larger effort to rein in state-owned enterprises and massive state subsidies for steel manufacturing in China. The steel debate is often seen as a classic example of why and how China’s effort to achieve “market economy status” is problematic. An EU effort to commit to retaliatory tariffs for an extended period (three years) and to apportion the impact to all trading partners implies that European trade policy officials support a broader US policy agenda to bargain hard vis-à-vis China within the multilateral system.

Trade talks always generate bluster and heated rhetoric. This week’s talks in Beijing and Washington are no exception. But the EU’s opening moves in 2019 suggest strongly that European policymakers seek to move forward at least incrementally on concrete issues where European and US policymakers share strategic interests.

The move comes at a good time for the Trump administration. Mired in a major battle with Congress over fiscal policy and immigration issues, the US government needs to show traction in policy areas beyond the border wall. Progress on trade policy issues with the EU, particularly coordinated and compatible moves on steel at the WTO, would address a number of shared transatlantic priorities regarding WTO reform and global market function even as they address important domestic political priorities. A trilateral meeting between US, EU, and Japanese officials in Washington on January 9 offers an important opportunity to make progress on WTO reform specifically. The announcements from Brussels can be seen as providing some much-needed good news showing traction on strategic steel and agricultural issues. The moves also illustrate the constructive role that Europe can play on the global trade stage regarding China.

Two questions remain unanswered, however. First, what kind of initiatives will EU officials seek from the Trump administration in exchange for European support regarding China? Second, is the administration ready, willing, and able to take these incremental wins? We are about to find out.

Barbara C. Matthews is a nonresident senior fellow with the Atlantic Council’s Global Business & Economics Program.  She has served as a senior U.S. government official in Brussels as the first US Treasury attaché to the European Union and in Washington DC as senior counsel to the Financial Services Committee at the US House of Representatives.  Follow her on Twitter @BCMstrategy.