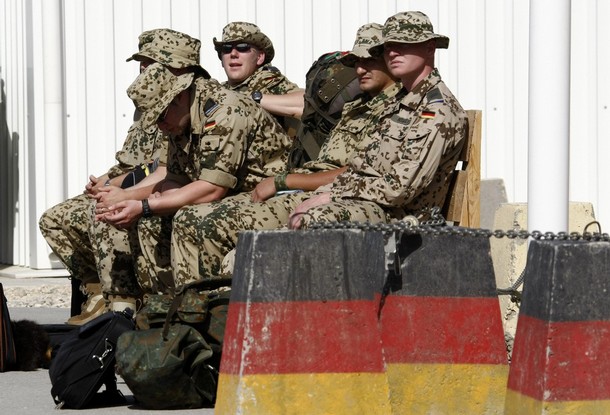 The Germans are talking about military reform and to be honest, it is actually a very interesting issue to follow. This article can bring you up to speed on some of the issues if you are interested, but for more depth to the debate you’ll need to look elsewhere (and most of it is in German). There are two main points that I think are worth noting.

First, Germany is ready to discard their conscripts.

The rationale behind this bold yet highly controversial push to suspend the draft is two-fold. First, the Bundeswehr needs far less conscripts than are theoretically required to serve in the armed forces, thus raising serious concerns about a lack of “Wehrgerechtigkeit” (“draft equity”). After all, how can the government justify drafting tens of thousands of young men for a nine-month military service while simply letting many of their friends off the hook? Second, the Bundeswehr’s conscription-based system is not only more expensive than a purely professional/volunteer force, but has also proven to be ill-equipped to deal with the growing demand for expeditionary military action in countries ranging from Afghanistan and Sudan to the coast of Lebanon.

Second is the idea that Germany would become more expeditionary in structure than its current cold war era territorial defense structure.

The proposed Bundeswehr reforms (including a suspension of the draft) are not only better suited to deal with today’s complex security threats, ranging from terrorism and WMD/missile technology proliferation to global crime networks and piracy. They would also be welcome news for Berlin’s allies, who could, in principle, count on the support of a militarily more capable Germany, both within NATO and within the EU context (the required parliamentary approval for each Bundeswehr deployment abroad notwithstanding). In the wake of the recent economic crisis, huge fiscal deficits are putting severe pressures on defense budgets across Europe, especially France, Germany, and the UK (London might be forced to cut its annual defense spending by up to 20 percent). If Germany can lead the way in terms of adopting politically controversial yet ultimately indispensable military reforms – thus generating more bang for fewer bucks – there is indeed at least some hope that European/NATO members in general can create much-needed synergies in defense procurement and force restructuring based on the notion that not all allies require the full spectrum of defense (industrial) capabilities.

The United States is too interconnected to the global security environment to ignore military reform debates in other countries, and this debate in particular represents one of the few reforms in Europe where a military power is expanding its capabilities to forward deploy, even as the total number of military personnel would be reduced. Regardless of country however, the trends for 21st century military reform seem to take on the same character: expeditionary.

We will have to wait and see what Germany ultimately decides to do, but in reading military reform arguments from various nations across Europe, including Russia, the 21st century Army models of expeditionary forces most often include discussions regarding amphibious lift capacity and numbers of medium and heavy lift helicopters. In other words, the capabilities that most mimic the US Marines are more desired by the rest of the world than the capabilities of a large standing Army.

It is a noteworthy contrast of strategic thinking how in the US, we seem to have this in complete reverse as we debate what the US Marines will be in the future while speaking of the enormous challenges towards recapitalizing the Army in DoD budget discussions. With Iraq combat operations now over, it is time to keep an eye on what narrative emerges in Washington.

How long before think tanks start talking about recapitalizing the Army, and how long before those think tanks that have been Army focused due primarily to Iraq and Afghanistan are ready to examine broader strategic alternatives for the future that include an emphasis on airpower and seapower? These will be interesting time tables, because the think tank community in Washington is packed with Army strategic thinkers right now – and if the conversation stops being about the Army, their job might be in jeopardy.

Yep, it is parochial, but it needs not be. I consider the 101st Airborne Division as an airpower capability in dire need of a maritime enabling component, and the US Marines represents both an airpower and seapower capability that needs better options for forward deployment. On this blog we cannot limit our viewpoints to the parochial traditions of inter-service rivalry (even if they do in Washington).

Raymond Pritchett, known on the Internet  by the pseudonym Galrahn, is a technologist, entrepreneur, and owns a technology consulting company in upstate New York. He also operates the Information Dissemination blog, where this article first appeared.