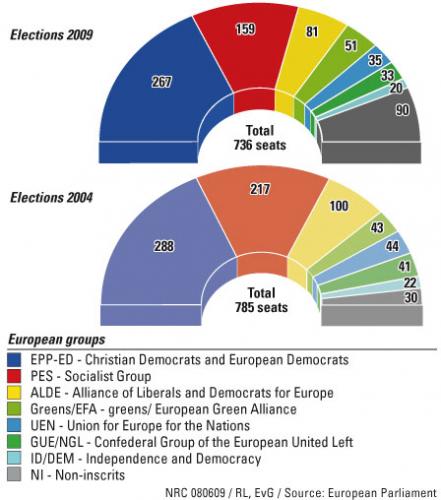 A number of trends emerged from this weekend’s European Parliament elections: the center-right parties maintained their dominance, voters again used the elections as a mid-term appraisal of their national governments and voter turnout continued its downward trajectory.

For a detailed analysis of the results, check out James Joyner’s pieces here and here.

Center-right parties gained more seats than usual, with socialist parties losing significant ground.  Right of center parties led by Sarkozy, Merkel and the governing parties of Italy and Poland all saw successes.  The ALDE is now poised to play kingmaker.  The Guardian provides a handy interactive map for election results by country.

Voter turnout reached an all-time low, down to 43% from 46% in 2004, continuing an unabated thirty-year decline.  A worrying paradox has emerged: as voters become more apathetic, the European Parliament grows in influence.

The problem will only compound if the Lisbon Treay is ratified, giving the European Parliament even greater powers.

All Politics is Local

Those who went to the polls voted mostly along national lines, using the ballot as a vote of confidence (or no confidence) in national governments or expressing support for issue-based parties (like hard-line nationalists).  Although center-right parties emerged largely unscathed throughout Europe, Labour took a predictable blow in the UK, further eroding what little is left of Brown’s hold as prime minsiter:

Parties in Greece, Hungary, and Ireland also took a hit from dissatisfied voters.

Additionally, there were gains by “fringe” parties, including the British National Party, who picked up two of Britain’s seats in the European Parliament. The Party has been condemned by all of the major parties in Britain.  There is no shortage of European counterparts to the BNP either.  Similar gains were made by anti-immigration and nationalist parties in the Netherlands, Austria, Hungary and elsewhere:

The Euroskeptic Libertas party suffered a resounding defeat.  It failed to win any seats in Latvia, Poland or the Czech Republic, the countries where it was expected to have the greatest chances of electoral success.  Libertas’ Irish leader Declan Ganley did not win a seat, and the party overall won only one seat in France.  This bodes well for the Lisbon Treaty’s second referendum in Ireland — Ganley stated he would not campaign against Lisbon for a second time if he failed to win a seat.  EPP chairman Wilfried Martens discussed Libertas’ defeat for EUX.TV:

Does the failure of Libertas, the first party to run on a pan-European platform, signal that the EU is a long way away from having European-wide parliamentary elections actually be a vote on European-wide issues?  If the trends are any indicator, the answer is unfortunately a negative one.