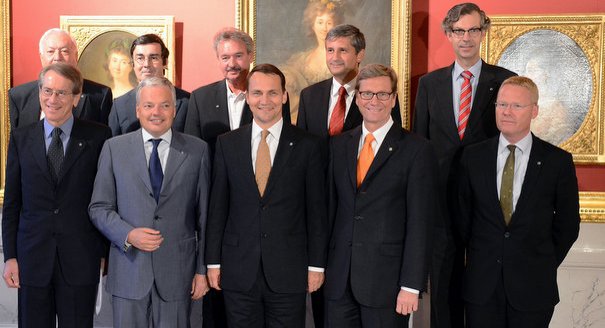 With a loose heritage that dates back to Charlemagne and the Holy Roman Empire Vienna is the quintessential post-imperial European city. Now the capital of a small but rich and modern European state it was once the epicenter of a vast multicultural, multi-ethnic empire that collapsed in 1918 under the weight of its own political hollowness. As a metaphor for modern Europe there can be no better.

Sad though this may be much of my weekend was spent reading and contemplating the Future of Euro-Aristocracy (sorry Future of Europe) Group report compiled by the foreign ministers of Austria, Belgium, Denmark (traitors), France, Italy, Germany, the Netherlands, Poland, Portugal and Spain. If this was a football/soccer tournament this would be known as the Group of Death because it would be almost impossible to get out of.

A not inconsiderable bit of the report I sort of agree with. That, “the European Union has reached a decisive juncture” cannot be contested. Their central contention that a Europe of “28 or more” member-states renders the EU less than the sum of its parts, is equally compelling, but only because they are moving the goalposts between structure, power and ambition. However, thereafter I part company with the ministers because for all their talk of democracy and accountability for them more Europe, means less democracy. This report is in effect the founding document of the coming Eurosphere and they see themselves as its founding fathers, like Schumann, De Spaak et al before them.

They call for “treaty changes” if needs be to deepen Economic and Monetary Union, ever deeper policy co-ordination between member-states, an effective single ECB supervisory mechanism to oversee the banks and more power for the European Commission with a directly-elected European Commission President (what German Foreign Minister Guido Westerwelle last week called a European Government). All this together with a strengthened European (Pretend) Parliament to “ensure full democratic legitimacy and accountability”. They also call on the EU “to strengthen its act on the world stage” by creating in effect a real EU foreign and security policy, taking the veto (i.e. Britain) out of EU foreign and security policy decision-making and for a new European defense policy, which “could eventually involve a European Army”.

In short, the Euro-Aristocracy are creating is a political Frankenstein, something Polish Foreign Minister Radek Sikorski rather forgot in an anti-British speech he made in Oxford last week. We, the citizens? Last week I was told by a fully paid-up member of the Euro-Aristocracy to shut up. What he painted for me was a picture of my European future. I was warned for standing in the way of the powerful. “Yes”, I replied, “because what is happening is so important that we citizens must be heard whether you like it or not”. He snorted dismissively. Across Europe the same pattern is being repeated. Civil society is slowly being strangled by the elite as critics are either co-opted, intimidated or both.

Over coffee I fell into conversation with a Viennese gentleman. He did not like the idea of a big Europe because he said it reminded Austrians of a very painful past but like millions of his fellow Austrians he felt utterly powerless. He told me he detested politicians acting in his name when he had no say. He said he also felt grateful to Britain for again standing up to the grand illusion of a European super-state. Sadly, I did not have the heart to tell him that PR-Meister Cameron and his Lilliputian London Government lack both the vision and the political backbone to stand up for British interests, let alone those of small countries far way about which they know little.

This report should not be under-estimated. It is the beginning of a determined campaign by the Euro-core Euro-Aristocracy to drive through the most profound change in political Europe since World War Two. They will use hook and crook, demanding formal treaty change here bypassing the recalcitrant there, be they concerned citizens such as me, or the soon to be EU-exiting British (or both).

Given all that Vienna seems an appropriate place to remember the parable of the naked emperor. Conned into believing he had been given a magic cloak of the finest cloth, the emperor was in fact naked and only he was blind to the fact. This time it is the emperors who are conning the people.