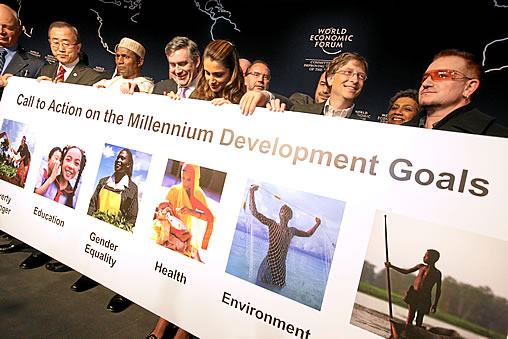 In an International Herald Tribune column asking "Is Europe’s welfare system a model for the 21st century?" Katrin Bennhold contends that, as the world’s economic elite gather in Davos for the annual World Economic Forum, there is decidedly less Europe-bashing than in years past. After the global financial shake-out of the past  year, she wonders, "Could Europe’s much-reviled social welfare system actually end up being the model for the 21st century world?"

In the United States, the global stock market rout has wiped out trillions of dollars in retirement savings and rising unemployment is leaving more people without health insurance. In response, officials of the new administration of President Barack Obama have been busy studying the Swedish bank bailout of the 1990s and the Swiss and Dutch health care systems and have been quietly contemplating whether Europe’s high fuel taxes and carbon trading system are the right way to limit the burning of fossil fuels that contributes to global warming.

In China, where the demise of the American consumer has exposed the perils of excessive savings at home, the government has not only recently proffered a big Keynesian-style stimulus program but has also just announced a three-year plan to provide universal health care. Though modest by comparison, China’s health care plan goes in the direction of what has long been considered a fundamental right in Europe.

"When the world’s biggest economy and the world’s biggest emerging economy look for lessons in the same place at the same time, you know something is up," said Kenneth Rogoff, a professor at Harvard University and former chief economist of the International Monetary Fund, who is one of the 2,500 participants in Davos this year. "We are seeing a paradigm shift towards a more European, a more social state."

It is no coincidence that this revolution is unfolding simultaneously in America and China, analysts say.  They were opposite poles in the hazardous gentlemen’s agreement underpinning global imbalances in recent years – one accumulating ever more debt, the other supplying the world with a glut of savings.  But for all their differences, no two countries were more dedicated to the growth-above-all-else capitalist mantra. And no two countries have seen the foundations of their economic models more shaken in recent months.

There’s little doubt that confidence in the efficiency of laissez fairre capitalism rises and falls with the economic tide.   When the stock market is booming, everyone wants to jump in and get their fair share.   When the business cycle shifts, bubbles burst, and jobs are scarce, government bailouts suddenly become the rage.

The fact of the matter is that no country operates a pure market economy and, indeed, none ever has.  Even Ronald Reagan and Margaret Thatcher, the modern heroes of capitalism, believed in safety nets and protection for key domestic industries.  All modern states have mixed economies; the only question is how many parts government and how many parts free market.

The United States has moved inexorcably towards market socialism since the 1930s.  Even with the rise of so-called conservative presidents like Reagan and George W. Bush, there has been little rollback in the huge welfare programs of the New Deal and Great Society.  (Ironically, New Democrat Bill Clinton, acting in concert with a newly Republican Congress lead by Speaker Newt Gingrich, cut back the welfare program that provided subsidies to single mothers with children with great fanfare.  The actual cuts in aid spending, however, were small.)  Once created, government programs seldom go away; they usually expand.

There’s no small irony in China, the most prominent Communist Party-led state remaining, being considered a totem of free markets.  But, yes, state control of the economy has gradually withered away since 1976.   Whatever shocks they get from today’s crisis, it’s inconceivable that they’ll ever return to the level of government dominance they had under Mao.

Regardless, the pitfalls of European-style socialism are not lost on either the Americans or the Chinese.   While younger than our Western European cousins, America is an aging society that already dreads the retirement of its Baby Boom generation and wonders how it will pay for it.  And China certainly does not want to arrest its powerful growth by taking investment capital out of the private sector to transfer it to the least productive elements of its society.

Will both strengthen their safety nets and tighten their regulatory oversight somewhat?  Almost certainly.   Will either the United States or China emerge from the current crisis indistinguishable from Sweden?  Not likely. While market shocks and financial crises are quite painful, capitalism has been berry, berry good to us both, giving us the most powerful economy and the fastest growing economy, respectively, on the planet.

James Joyner is managing editor of the Atlantic Council. Photo by Andy Metler.