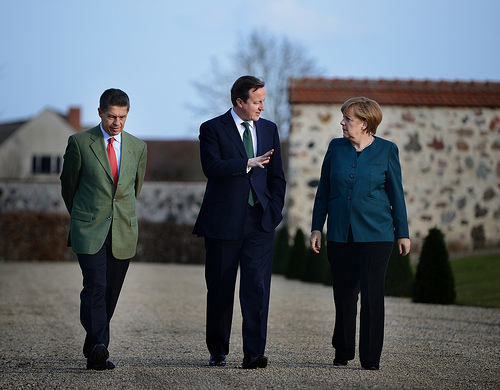 Former German Chancellor Gerhard Schroeder once said, “They have it wrong if they ask if Schroeder favors Britain over France or France over Britain. Schroeder favors Germany.”  Watching David Cameron with family enjoying a German weekend break with Angela Merkel one could be forgiven for thinking all is well in the British-German relationship.

And yet for all the well-publicized frictions it is equally clear that Cameron and Merkel get on.  It is also clear that the two countries need and will need each other.  Is this the beginning of a British-German axis?

There is after all much to unite Britain and Germany.  According to the CIA World Factbook (it must be true then) Britain and Germany are the two biggest EU countries with the two largest economies by purchasing power parity.  Germany is Europe’s economic leader whilst Britain remains (just) Europe’s military leader.  The two countries also share a surprisingly close strategic relationship on a whole raft of issues not least the two most pressing: the lack of fiscal resources and the need for Europe to become competitive.

Furthermore, Cameron and Merkel are natural political allies.  They are both moderate conservatives committed to the control of public spending through strong austerity programs which is rejected by France and many other EU countries.  Merkel has a strong sense of history and respects the role played by Britain in both World War Two and the Cold War.  Indeed, she believes fervently that EU influence and legitimacy without Britain would be dangerously weakened.

The weekend’s photo opportunities also sent a strong political message to France’s President Hollande that Berlin has options. The Franco-German axis, long the core pillar of the European project, is not what it was.  Perhaps in the week Margaret Thatcher died Cameron and Merkel were also sending a message about the importance of personal chemistry between leaders, implicitly recalling the Reagan-Thatcher years.

Berlin also seems to have grasped another reality missed by many commentators.  However it is dressed up, come the German elections in September if Merkel is to save the Euro thereafter some form of debt mutualization will be necessary.  This could cost Germany over time some 10 percent of its GDP if France goes over the edge of the fiscal-debt cliff where it is headed.  Equally, for all its current travails Britain does not face the growth-destroying consequences of the coming decade of Eurozone debt mutualization/restructuring and can and is competitively devaluing the pound.

That’s the good news; here’s the euro-realism.  There was a paradox in the Cameron-Merkel speak that emerged from the weekend that also highlights the very deep structural divisions between Britain and Germany over Europe.  Yes they both talked of reforming the EU and yes both suggested there would be need for treaty change.  However, what Cameron seeks is the partial deconstruction of the EU. He is particularly keen to put the European Commission back in a box in which its ‘competences’ are both defined and finite.  Merkel, on the other hand, is desperate to avoid any suggestion (as some are implying) that the EU is fast becoming the “Fourth Reich.”  She thus needs Brussels, and in particular the Commission, to legitimize much-needed German leadership and thus wants more ‘Europe’ not less.  In other words, Cameron and Merkel may appear to agree but in fact are fundamentally opposed on the key issue of more or less Europe. This is something which will become all too apparent in the year ahead and which will test the Cameron-Merkel relationship sorely.

Cameron said last week that the support of the British people for the EU is “wafer thin.”  He was being polite.  The moment Merkel moves to deepen integration the bottom is likely to fall out of pro-EU arguments in a Britain that already suffers a huge trade deficit with the EU, even as it enjoys a trade surplus with the rest of the world.

Therefore, in the coming test it is vital that Berlin and London somehow find projects on which to work closely together. Critically, they must emphasize those areas of shared and pragmatic national interest both in Europe and the wider world.  That will take confidence-building in each other, which was after all the purpose of this weekend’s visit.  What can Britain do now to reciprocate?  Cameron must come out unequivocally against growing anti-German sentiment in Europe.  Attack Berlin for policy mistakes by all means (that is democracy) but any parallel drawn between today’s Germany and the Nazis is offensive and must be confronted.

Why Britain?  A senior German once told me that the only ordinary state-to-state relationship Germany enjoys with any European state is that with Britain.  Every other relationship still somehow suffers from guilt on one side and fear on the other.  With Britain it was different, he said, “because we bombed you and you bombed us!”

So, no British-German axis but Britain and Germany will need each other.