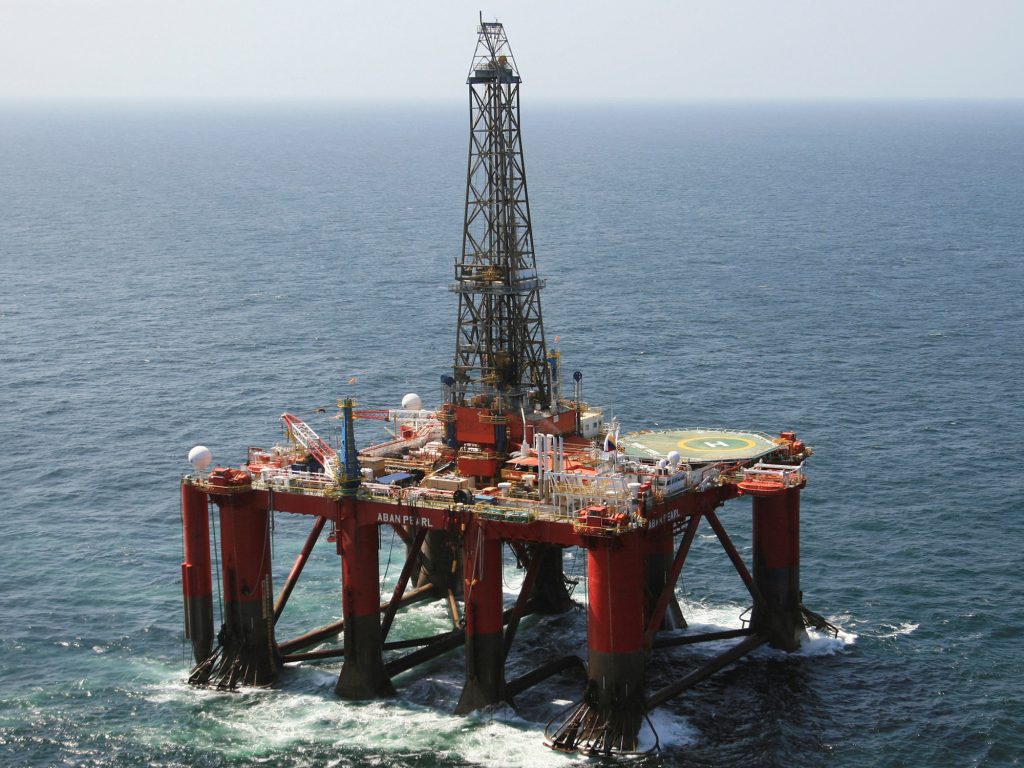 The United States announced Tuesday that it would allow Trinidad and Tobago to develop a gas field located in Venezuelan territorial waters. The agreement would boost Caribbean energy supply while creating an exception for some US sanctions on Caracas—though the United States says no cash payments will be allowed to go to President Nicolás Maduro’s government as part of Trinidad and Tobago’s deal with Venezuela’s state-run oil company PDVSA. What does this mean for the US stance toward Venezuela, and for energy resources in the Caribbean? Our experts are on the case.

A welcome and necessary act of energy pragmatism

The Caribbean is suffering from the current energy crisis. Still dependent on heavy fuel oil and kerosene, high product prices translate to high electricity prices which undermine the competitiveness of Caribbean tourism and industry. One critical part of decarbonizing Caribbean energy and restoring energy security is enabling better access to natural gas, which helps provide cleaner electricity and cleaner fuels such as methanol and supports food security by producing ammonia for fertilizer. The Biden-Harris administration’s grant of a license to help Trinidad get access to Venezuelan gas, without a dime going to the Maduro regime, is a welcome and necessary act of energy pragmatism. Trinidad needs access to more gas as quickly as possible to produce liquefied natural gas (LNG) and clean fuels. Gas from new exploration could be seven to eight years in the future. The region needs a more secure supply of products now. And with Venezuela reviving the Petrocaribe agreement to again provide cheap loans for the sale of crude oil to its neighborhood, the United States needs to show it cares and can be relevant. Much more needs to be done to provide energy security to the Caribbean, but this license is a deft and critical first step.

—David Goldwyn is a nonresident senior fellow at the Atlantic Council’s Global Energy Center and co-chair of the Caribbean Energy Working Group at the Adrienne Arsht Latin America Center’s Caribbean Initiative. He is the president of Goldwyn Global Strategies, an international energy advisory consultancy.

The US green light for Trinidad and Tobago (T&T) to begin development of a gas field in Venezuelan waters is a much-welcome step forward for Caribbean energy security. The Caribbean faces enormous short- and long-term energy challenges and needs this gas for its people and its economies. It has again become clear while I’ve been here in T&T this week that the country is well-positioned to process this gas for export to its neighbors and beyond. In an increasingly uncertain world, the stability of the United States’ Caribbean neighbors and a robust US partnership is increasingly critical for US security interests.

Importantly, the US license and the T&T authorities have stipulated that no cash payments will go to the Maduro administration as part of the Dragon gas field development. The Maduro administration must not financially benefit from any transaction while it continues to perpetuate its violations of human rights and its prohibition of personal liberties or of the free and fair democratic will of the Venezuelan people. This new US license is a win for the Caribbean while still keeping Maduro financially isolated.

What the agreement means for negotiations between Maduro and the opposition

There is no doubt that the new agreement will enhance the Caribbean’s energy-security policy, both the policy itself and the speed of its implementation, given other geopolitical factors including the recent announcements by the Maduro government to revive the PetroCaribe program with former Venezuelan Ambassador to Colombia Félix Plasencia appointed to lead the revival. However, Venezuelan experts and political representatives have been cautious about this new sanction exception given that crucial details from the negotiation between Trinidad and Tobago and the Biden administration, as well as the negotiations with the Venezuelan government, are still unknown.

Venezuelans are wary in reaction to this news due to the local context and the developments of the negotiation process between the Maduro government and the opposition. The first humanitarian agreement signed between the two parties last November requires a complex process to be implemented. And the Maduro government has used this obstacle as an excuse to try to reconfigure the terrain for the future of the negotiations, which should move to a second phase—but without further sanction relaxation, this is unlikely to happen. Without sanctions relief, the Venezuelan government’s economic adjustment program will be shipwrecked, a result that is already being seen in the return of hyperinflation, innumerable salary protests, and the end of last year’s optimism. Today, the government seems to be aggressively armoring its position ahead of future negotiations by threatening to intervene in the National Electoral Council and proposing a new law to further restrict nongovernmental organizations.

Therefore, the agreement coincides with an unclear political climate, which may influence the public’s perception that the sanctions relief is geared toward US interests rather than a solution that can be contributed to negotiations in Venezuela.

—Colette Capriles is a member of the Adrienne Arsht Latin America Center’s Venezuela Working Group and a professor and researcher in philosophy, politics, and social sciences at Simón Bolívar University.

The US delivers a major win for the Caribbean

US commitment to Caribbean energy security took a significant leap forward on Tuesday. Granting Trinidad and Tobago a license to develop the Dragon gas field is momentous for the country, and it creates endless opportunities across the region. In the short term, perhaps over the next half-decade, a portion of the gas will be used to service the energy needs of Jamaica and the Dominican Republic. Over a longer period, given the considerable oil and gas reserves Guyana and Suriname hold, the Caribbean is poised to become a globally competitive hydrocarbon player, potentially anchoring Caribbean energy security and meeting demand across the world. The license also opens the door to other gas fields bordering Dragon that Trinidad and Tobago can exploit over the next decade, which would provide the country and the region more time to facilitate its energy transition.

For the United States, the timing is important. Granting the license finally brings a tangible deliverable to Caribbean nations after a year of promises and discussions. With the Caribbean Community (CARICOM) inter-sessional meeting just around the corner—where all Caribbean leaders will convene—the US-Caribbean energy cooperation will be front and center of the Community’s agenda.

—Wazim Mowla is the associate director of the Caribbean Initiative at the Adrienne Arsht Latin America Center. 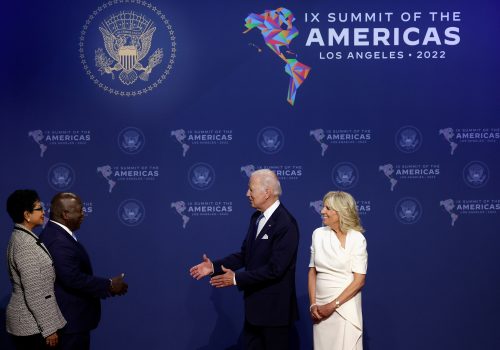 This is a make-or-break year for US-Caribbean relations 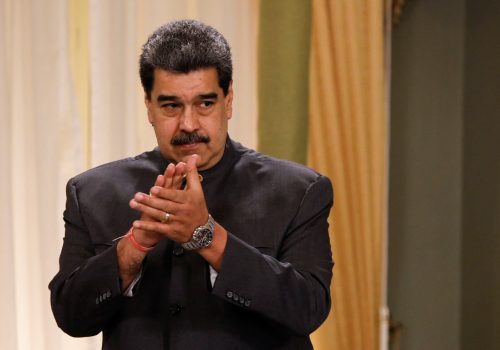 Experts react: As the US eases oil sanctions, is Venezuela coming in from the cold?

With Chevron expanding operations and talks ongoing between the government and the opposition, what’s next for Venezuela? Our experts drill down on the details. 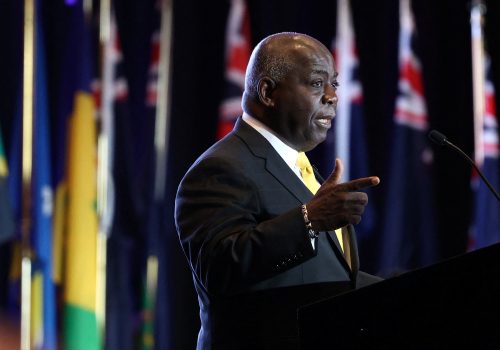 Philip Davis, prime minister of The Bahamas and chair of the Caribbean Community, told the Atlantic Council that the region is ready to take action on improving energy security and economic development.

Image: A view of the Aban Pearl gas rig in the Caribbean sea, along the Venezuelan coast May 6, 2010. Photo via REUTERS/PDVSA/Handout.