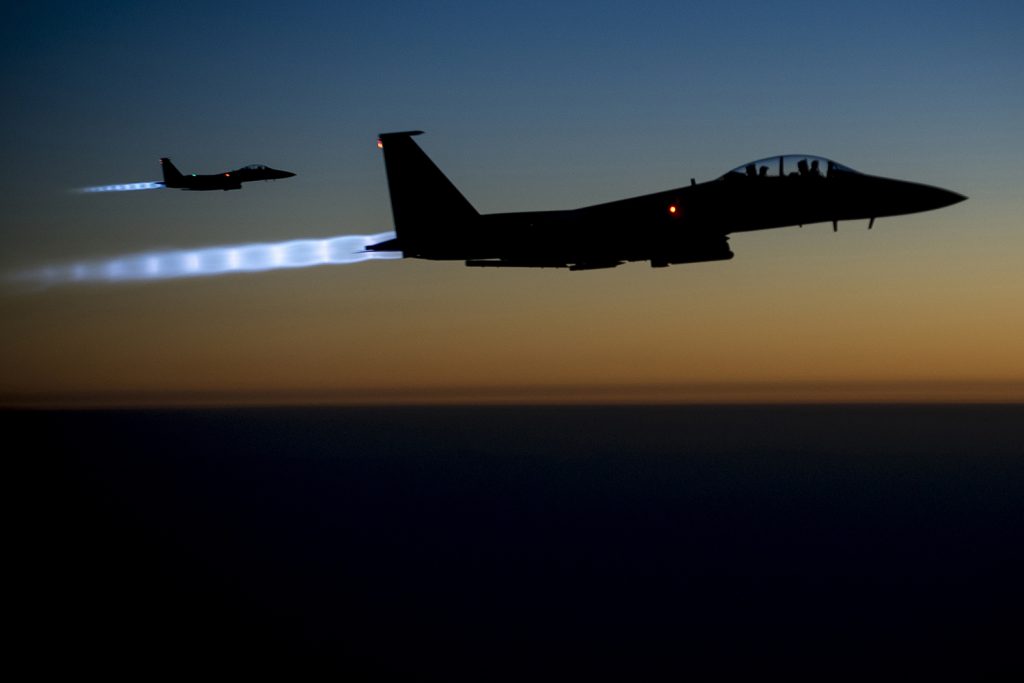 Following the death of a US military contractor in a rocket attack on Friday, December 27, the United States retaliated against Kata’ib Hezbollah, an Iran-backed group, with five airstrikes in Iraq and Syria on December 29, 2019. For months the group has carried out increasingly brazen strikes against US targets in the region.

Atlantic Council experts weighed in on the Kata’ib Hezbollah attacks, US retaliation, and the escalating situation in the region.

“Whenever there is no US reaction to Iranian military aggression, the risk increases that their malign behavior will be established as acceptable—and even perceived as legitimate by certain regional audiences. That was the case when they attacked shipping near the Strait of Hormuz and the Bab-el-Mandeb, then when they shot down an American drone in international airspace, then when they conducted an impressively precise strike against Saudi energy infrastructure, and most recently when their proxies steadily increased their rocket attacks on US installations in Iraq. Incremental sanctions and covert cyber actions have been ineffectual in reestablishing American deterrence. Now there has finally been an US military response, taken only after a rocket killed an American.

“What lessons are the Iranian regime drawing from this pattern of American behavior? First, that the Carter Doctrine that has defined US policy in the region for decades is, at best, now an open question. Second, there will be no meaningful, overt, US military responses to Iranian military actions that target US unmanned platforms or military infrastructure, the security of our regional allies, the sea commerce in the region that is vital the world economy, or the region’s irreplaceable energy infrastructure—much less to Iranian continued military activities in Yemen and Syria that threaten Saudi Arabia and Israel. And third, that if Iran has its proxies kill Americans then the US will limit its military response to a proportionate strike on those same proxies and not to their Iranian masters. It is always dangerous to allow one’s adversary to define the terms of the conflict, but that appears to be what the US is doing now.”

“The game changer in terms of US decision making was the recognition that Iran is flagrantly attempting to leverage the political chaos in Iraq to install Iran-backed politicians in positions of power and to unleash Iran-backed forces on US and partner Iraqi troops.

“Iran’s proxies took the gloves off when Yemeni President Ali Abdullah Saleh announced his intent to resign. The upheaval in government presented them with an opportunity to operate unfettered. With this shift on the ground, a critical argument for US restraint fell away.

“The Department of Defense, at the Undersecretary level, previously opposed kinetic and information operations actions targeting the Popular Mobilization Forces (PMF) on the grounds that they might result in attacks on US personnel by these Iran-backed forces in Iraq.

“Now that attacks on US personnel are happening without provocation, the decision becomes whether to retaliate, be intimidated into withdrawal, or make sitting ducks out of our men and women in the field.

“The US retaliatory strikes hit targets along the Syrian border chosen specifically to keep escalation to a minimum. This, despite the loss of an American life in the December 28 rocket attack on US personnel in Kirkuk.

“In terms of degrading Iran’s proxy capability, hitting one of the bases from which proxy rocket attacks have originated could be more impactful. But the objective of this attack was to inform Iran that the US military has the top cover and the authority it needs to respond when it wants.

“We knew Iran would pursue a policy of continued low-level escalation with the US and allies at least through the US elections. Iran knew that President Trump does not want an all-out war. Iran’s mistake was in assuming that US strategic thinking would not adapt to conditions on the ground.”

“Friday’s rocket attacks on the Iraqi “K1” military base was intended to target Americans, not Iraqis, because the base is home to US forces involved in training Iraqis for counterterrorism and other missions. On Sunday, December 29, the United States military held the Iranian-backed Iraqi militia group Kata’ib Hezbollah (KH) responsible by launching five attacks against its facilities in Iraq and eastern Syria.

“Despite the popular concept in Washington, Baghdad, and perhaps Tehran that President Donald J. Trump, Iraqi, and Iranian leaders would all prefer not to be drawn into a war, the past few days have provided a case study of how a cycle of escalation could start. Friday’s rocket attacks show that the Iraqi government is not able to control KH. Sunday’s US attacks show that the United States is not going to let KH’s attacks and harassment go without a military response.

“The US strikes against KH are important for being one of the first kinetic US responses in a long time to a series of harassments and threats by KH, which the State Department designated as a Foreign Terrorist Organization in 2009. KH’s leader, Jamal Ja’far Ali al-Ibrahami, widely known by his nom de guerre Abu Mahdi al-Muhandis (“the Engineer”), personifies both the challenge and the danger caused by Iran’s campaign to build a parallel security structure in Iraq outside of the democratically elected government’s control. Al-Muhandis is both the leader of KH and also one of the leaders of Iraq’s Popular Mobilization Committees (PMCs), a militia force raised in 2014 after the Islamic State (ISIS) took over Mosul and much of western Iraq. The United States considers Al-Muhandis a terrorist based on attacks by his forces against the US military going back to before the US withdrawal from Iraq in 2011. The Iranians consider him a key figure in their efforts to increase Iran’s influence in Iraq with the goal of giving Iran a lasting presence inside the Iraqi government’s security forces while maintaining a separate force of Iraqi fighters under Iran’s influence.

“One of Iraqi Prime Minister Abd al-Mahdi’s foremost goals, after ISIS lost its Iraqi territory, was that Iraq not be a battleground between Iran and the United States. Friday’s rocket attack and Sunday’s response show how difficult Iran is prepared to make it for Iraq to continue on such a course. In late November, Abd al-Mahdi submitted his resignation as prime minister because his government was not able to meet the demands of protesters calling for jobs, an end to corruption, and less Iranian influence. Abd al-Mahdi is currently in a caretaker role until President Barham Salih and the Iraqi Council of Representatives can decide on his successor.

“Instead, a number of Iran’s proxies in Iraq appear to interpret President Trump’s decision to withdraw US forces from Syria, which the President intended to fulfill a promise to his base, and the lack of a kinetic response to the September 14 Iranian attack on Saudi oil processing facilities, as signs of American weakness. These anti-American voices are calling for increased confrontation in the hope of driving the United States out of Iraq for good.

“Remember that Iran and its proxies in Lebanon saw Israel’s withdrawal from southern Lebanon in 2000 as a major victory that justified—and strengthened—their strategy of confrontation against Israel. They would like to see the United States withdraw from Iraq in 2020 or 2021. This would likely strengthen their strategy of confrontation against the United States.

“Iran is also trying to replace Abd al-Mahdi with a pro-Iranian prime minister who would help force a US withdrawal by depriving the United States of the legal cover of Iraqi government consent that the United States has used since 2005 as the basis for maintaining its security presence in Iraq. The United States, by contrast, does not have its own candidate, believing that Iraqis should make their own choice for prime minister.

“The danger for the United States is that a withdrawal from Iraq under Iranian pressure, however desirable such a withdrawal might seem to President Trump’s base and some of the Democratic presidential candidates, will have consequences that are unpredictable and could be dangerous. Over the past seventy years, the Middle East has shown it can draw the United States back in even when American leaders would like to focus their attention on problems at home.

“At this point the best outcome would be no further escalation. This will require that Iran’s proxies in Iraq get reined in—by the Iraqi government, by the leaders of those militias, or by an Iranian government that recognizes a military confrontation with the United States might not end up to the advantage of the current Iranian regime.”