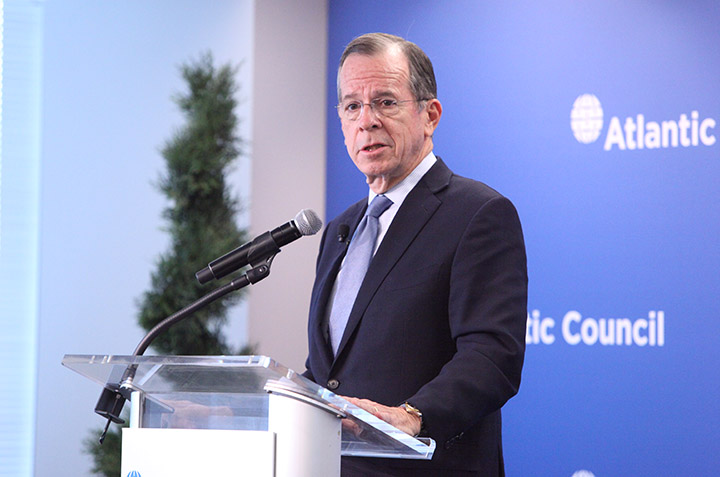 A failure by Congress to speedily ratify a free-trade agreement between the United States and eleven other Pacific Rim nations will mean that it would take “at least a decade” to muster the political capital needed to push the deal over the finish line, retired Adm. Michael Mullen, a former Chairman of the Joint Chiefs of Staff, said at the Atlantic Council on May 16.

After five years of negotiations, the United States and eleven other Pacific Rim countries reached an agreement on the Trans-Pacific Partnership (TPP) in Atlanta on October 5 of 2015.

US President Barack Obama formally gave Congress notice of his intent to sign the TPP and his administration released the text of the agreement in November of 2015. Obama wants to get congressional approval of the agreement before he leaves office next year. However, neither the Senate nor the House of Representatives appear in a rush to act.

Mullen said a failure to get TPP done now would be a mistake. “Either it’s ‘yes’ or it’s ‘no.’ If it’s ‘no’ it is going to be no for a while,” he said. “If it doesn’t happen, the political capital just to turn it around, I don’t know that it exists in this town.”

Lawmakers and presidential candidates on both sides of the political aisle have reservations about the TPP. Donald Trump, the Republican Party’s presumptive presidential nominee, has called it “a horrible deal.” Among the Democratic presidential candidates, Bernie Sanders has said he would “kill” TPP; and Hillary Rodham Clinton, who while part of the Obama administration championed TPP as a “gold standard” agreement, now opposes it.

“When we try to cut off initiatives like this we do this to almost cut off our nose to spite our face,” said Mullen. Noting that the United States has a responsibility toward global security, he added: “It’s been a long time since I thought the United States could do this alone any more. We need partners, we need likeminded countries, and certainly something like TPP is emblematic of that.”

The TPP, the largest-ever regional trade accord in history, includes the United States, Canada, Mexico, Peru, Chile, Japan, Vietnam, Brunei, Malaysia, Singapore, Australia, and New Zealand. These countries together make up 40 percent of the global GDP. At least one other country, Indonesia, has expressed an interest in joining the TPP.

The US International Trade Commission will on May 18 release its estimate of the economic impact of the TPP. Obama administration officials have, however, ruled out renegotiating the deal.

The TPP represents a major economic and strategic breakthrough for the United States “at a time when US leadership in the world is being tested on multiple fronts,” said Atlantic Council Chairman Jon M. Huntsman, Jr.

“TPP presents us with an opportunity to secure our strategic interests and help shape the future of global trade,” he added.

While contending that the deal reaffirms the United States’ commitment to Asia, Huntsman acknowledged that the agreement has been “politically divisive at almost every conceivable level and has proven to be a ripe target for critique during this election cycle.”

After delivering his remarks, Mullen participated in a session moderated by Jason Marczak, Director of the Latin America Economic Growth Initiative at the Atlantic Council’s Adrienne Arsht Latin America Center.

The TPP is as much about trade liberalization as it is about balancing China’s ascent. Supporters of the deal see it as a way for the United States, not China, to write the rules of global trade. China conducts large volumes of trade with countries in its neighborhood, including Malaysia, Vietnam, and Japan, which are all part of the TPP. The higher standards required by the TPP are likely to affect this trade.

Huntsman, a former US Ambassador to China, said the TPP reaffirms US commitment to Asia at a time of uncertainty in US-China relations. “Above all, it provides an opportunity to influence the region based on higher standards of trade and more stable economies leading to a more secure environment,” he said.

Mullen said the TPP presents China an opportunity to constructively engage with all twelve members of the agreement and that this could be beneficial for the Chinese economy in the long run.

Noting the linkages between prosperity and stability, Mullen recounted that on a recent trip to China a key takeaway from his meetings was the fact that economic interdependence “will keep us from doing anything foolish from a conflict standpoint because if we get in any kind of serious conflict it will dramatically affect the Chinese economy, the US economy, and the global economy.”

Image: “When we try to cut off initiatives like this we do this to almost cut off our nose to spite our face,” retired Adm. Michael Mullen, a former Chairman of the Joint Chiefs of Staff, said of the Trans-Pacific Partnership trade deal. He spoke at the Atlantic Council on May 16. (Atlantic Council/Victoria Langton)