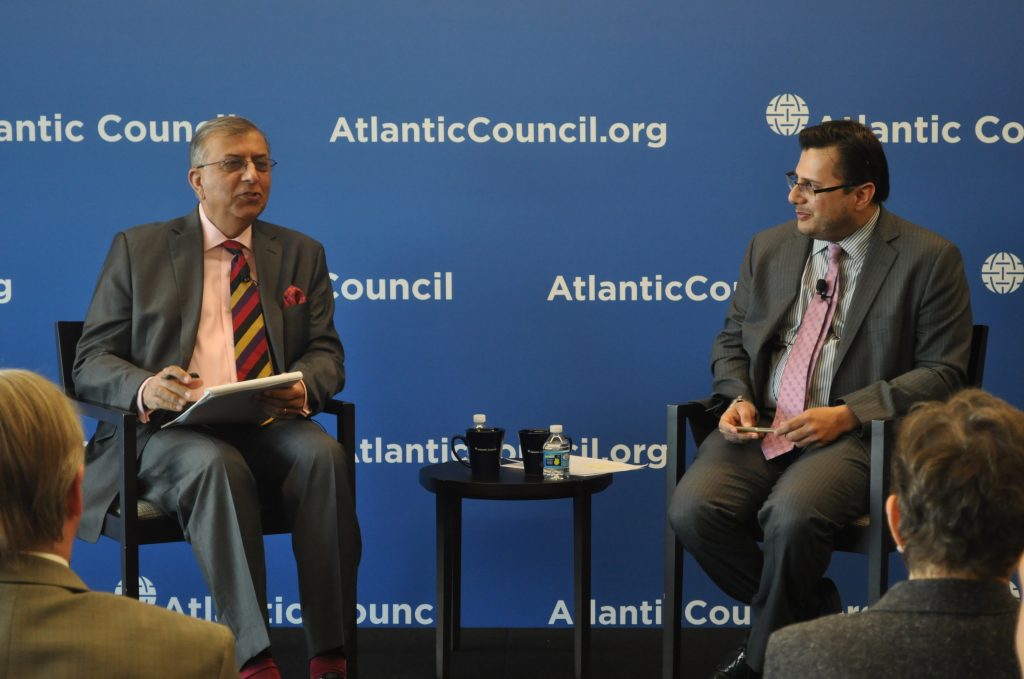 A sharp drop in world oil prices and the presence of other terrorist groups will make it hard for the Islamic State in Iraq and al-Sham (ISIS) to establish a foothold in South Asia, said Omar Hamid, head of Asia Pacific Country Risk at IHS, a global analytics firm.

ISIS and al-Qaeda face problems in Afghanistan, Pakistan, and India because there are “already very strong, established local entities there,” Hamid said at an April 13 event hosted by the Atlantic Council’s South Asia Center. “They are not walking into an empty canvas, and there is a limited pie in terms of recruits and funding.”

“Almost certainly, if they do chose to focus on South Asia they will come up against the local actors who will not have any sort of fraternal instinct for them,” Hamid said in a discussion moderated by Shuja Nawaz, Distinguished Fellow at the South Asia Center.

Under pressure from ISIS in the Middle East, al-Qaeda has launched a branch dedicated to waging jihad on the Indian subcontinent.

Hamid said local terrorist groups would not roll over and let ISIS or al-Qaeda encroach on their jihadi agenda, but instead “will see it as a challenge to their authority.”

ISIS’ efforts to expand have been “delayed by the fact that [its] biggest attraction point was that it had a lot of money,” said Hamid, adding that with the drop in oil prices, “their kitty is a lot smaller now in order pursue these wider objectives.”

ISIS set its sights on South Asia in part to take advantage of the splintering of the Pakistani Taliban—the Tehrik-i-Taliban Pakistan (TTP)—that followed the appointment of a divisive and confrontational leader. While ISIS, which has become the world’s wealthiest terrorist group, had an obvious attraction for terrorists looking to find a new home, falling petroleum revenues depleted the group’s coffers and dented some of its allure.

“With the drop in oil prices that has halved ISIS’ fortune overnight it is no longer as attractive a proposition as it was perhaps six months ago,” said Hamid.

The selection of Maulana Fazlullah in late 2013 as leader of the Pakistani Taliban following a US drone strike that killed his predecessor, Hakimullah Mehsud, created a rift in the group’s ranks. Fazlullah—also known as “Mullah Radio” for his fiery radio sermons—ordered the attack that wounded schoolgirl activist Malala Yousafzai.

“In Fazlullah’s taking over the mantle of leadership lie the seeds of discord that we have seen subsequently germinate within the Pakistani Taliban,” said Hamid.

Internal unrest as well as a Pakistani military campaign launched last summer caused the TTP to lose safe havens in the North Waziristan agency bordering Afghanistan. Several factions also broke away from the TTP following differences over whether to fight the Pakistani military.

Hamid said the Pakistani offensive claimed another victim as well: the Haqqani network, which Pakistan outlawed in January and which the United States lists as a terrorist organization.

“The Haqqani network now has probably been totally decapitated and its ability to carry out any meaningful attacks has been very radically reduced,” said Hamid.

Pakistan has adopted a more aggressive posture against terrorist groups since Prime Minister Nawaz Sharif took office in June 2013. Gen. Raheel Sharif’s appointment as army chief in November of that year completed a change of guard in Islamabad and Rawalpindi—the headquarters of Pakistan’s army.

In late 2013, Pakistan began to implement a shift toward a “very different trajectory” in its fight against militancy, said Hamid. This was hastened by the massacre by TTP terrorists of more than 140 people, most of them schoolchildren, at an army school in the northwestern city of Peshawar on December 16, 2014.

Pakistan’s relationship with Afghanistan has also been transformed under Sharif and Afghan President Ashraf Ghani. The two neighbors have stepped up cooperation in the fight against terrorism, especially since Ghani decided to shelve military aid from India and lift a ban imposed by his predecessor Hamid Karzai on US drone strikes in Afghanistan, said Hamid. All of the drone strikes since have targeted TTP leadership.

This quid pro quo was “patently clear” to all observers, said Hamid.

“The Pakistanis had delivered on cracking down on Haqqani, and the Afghan and US forces on the other side were delivering by cracking down and targeting the Pakistani Taliban leadership, which has been out of reach of the Pakistani military,” he said, predicting that this may lead to “meaningful peace negotiations” between the Afghan Taliban and the Ghani government.

Pakistan’s relationship with India, on the other hand, has become strained by a Pakistani court’s decision this month to release on bail Zaki-ur Rehman Lakhvi, the suspected mastermind of the November 2008 terrorist attacks in Mumbai, which killed 164 people and wounded 308 . Lakhvi is a senior leader of Lashkar-e-Taiba (LeT), the terrorist group behind the Mumbai bombings.

But, he added, the Pakistani judiciary is independent and the government had “stretched the legal limits of the law, perhaps even overstretched it in trying to maintain [Lakhvi’s] detention, because they felt it was an unnecessary embarrassment to have him out free.”

Image: Omar Hamid (right), head of Asia Pacific Country Risk at IHS, talks about the threat of militancy in Pakistan in a discussion moderated by Shuja Nawaz (left), Distinguished Fellow at the Atlantic Council's South Asia Center, April 13 in Washington.