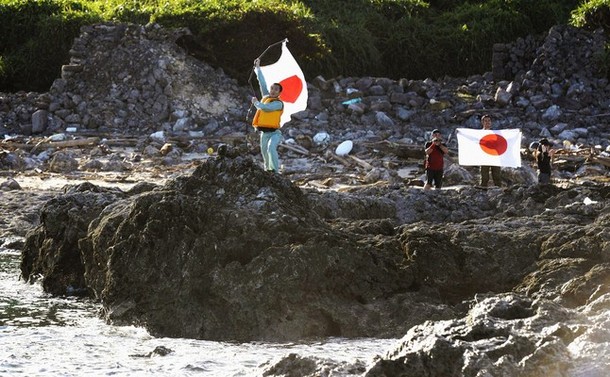 It is a worrying vision of a dangerous future. Last week Chinese ‘activists’ landed on the Japanese-controlled but disputed islands of Senkaku (Diaoyu in Chinese) followed swiftly by Japanese nationalists. On the face of it this dispute seems almost tragi-comic, a plot straight out of Gilbert and Sullivan. Just one of those momentary summer headlines for a Europe taking a breather from the Euro-disaster and a distraction for the eternally electioneering Americans. And yet, this East China Sea dispute could in time be seen as the true beginning of a contest that will come to define the twenty-first century as much as the coming war between Iran and Israel: the struggle for power dominance in East Asia.

However, the conflict goes much deeper (excuse the bad pun) and is about much more than hydrocarbons. The Chinese have claimed the islands since at least the fourteenth century, whilst Japan asserted control over them in 1895, a stepping stone on the road to Tokyo’s then imperial ambitions which eventually led to Japan’s brutal 1937 invasion of Manchuria (China), the 1940 Greater East Asia Co-Prosperity Sphere, and eventually the 1941 Pacific War. The Americans took control in 1945 with the defeat of imperial Japan but handed them back to Tokyo in 1971 to ease Japanese concerns about the Nixon-Kissinger rapprochement with Mao’s China.

Today, it is Beijing that is exerting its regional-strategic economic and military muscle and this dispute bears all the hallmarks of a clumsy Chinese attempt to escalate. In the shadow of its declared foreign policy goal of “strategic harmony,” China has established the self-declared Exclusive Economic Zone or EEZ. The zone is entirely fungible. Nominally it extends no more than two hundred miles off the Chinese coast, although some Chinese maps have the EEZ extending across both the South and East China Seas, from Vietnam to Japan.

As such this China-Japan standoff is just one of several in which Beijing is involved and in which all the regional powers are involved. China and the Philippines are in dispute over the sovereignty of the Spratly Islands, in particular the Reed Bank, on which a British company is currently surveying for oil and which is regularly harassed by the Chinese. China is also exerting pressure on PetroVietnam as it searches for oil and gas in Hanoi’s own self-declared EEZ off the Vietnamese coast. In October 2011 China and Vietnam signed an agreement that established principles for resolving maritime issues, but only time will demonstrate its utility.

The strategic picture is further complicated by the rapid expansion and modernization of Chinese naval and naval paramilitary forces. It is self-evident that if some kind of accommodation is not found soon the potential for conflict grows by the day. This is especially so as all of these disputes mask the rampant nationalism which holds the entire region in its very partisan grip, reflective itself of long-held and deeply-felt grievances.

For China the stakes could not be higher. The rise of the People’s Republic has been built on economic nationalism, the feeding of the West’s consumer obesity and the avoidance of direct strategic confrontation. These small specks on a maritime chart could derail what has been a highly successful strategy. Beijing often worries publicly about other powers seeking to ‘contain’ China, in much the same way that the US ‘contained’ Soviet Russia. China’s fear could be self-fulfilling if Beijing continues to press with a heavy hand in the East and South China Seas.

Indeed, important though oil and gas may be to resource-starved Asian economies in which many regimes are legitimized by economic growth rather than democracy, these disputes are really about the regional-strategic pecking order in East Asia. Much like the European pecking order did much to shape the nineteenth century world the twenty-first century world order will owe much to the power shape of East Asia. Nothing is more likely to engender an anti-Chinese regional coalition than a China that makes a mockery of “strategic harmony.” Any such coalition would inevitably and invariably draw in the Americans.

And, in this security globalized world what happens ‘over there’ impacts ‘over here.’ One-time British Prime Minister Neville Chamberlain once described Czechoslovakia as a “far-away country of whom we know nothing.” The rest is history.

Julian Lindley-French is the Eisenhower Professor of Defence Strategy at the Netherlands Defence Academy, Fellow of Respublica in London, Associate Fellow of the Austrian Institute for European and Security Studies and a member of the Strategic Advisory Group of the Atlantic Council. He is also a member of the Academic Advisory Board of the NATO Defence College in Rome. This essay first appeared on his personal blog, Lindley-French’s Blog Blast. Photo Credit: Reuters Pictures