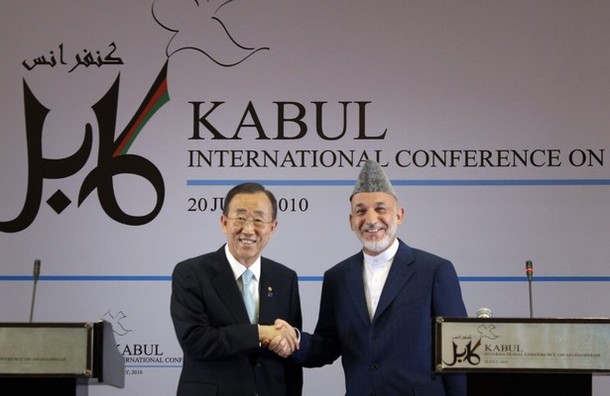 Even though we are about two months away from “surge force levels” in Afghanistan and five months away from the planned strategy review, a number of commentators have used the Stanley McChrystal – David Petraeus transition as an opportunity to reconsider the mission’s success.

Unfortunately, military operations like those in Afghanistan defy the use of words like “win” or “victory.” Instead, Afghans are attempting, with substantial international help, to build a functioning political system, economy, and security establishment. But there are challenges to this internationalized effort that continues to claim lives.

On the military front, there are complaints that the rules of engagement are too restrictive, fratricide is too common, and withdrawal discussions are too premature. Petraeus will undoubtedly review and adjust military operations as Afghan and coalition forces increase. We should expect as much; the security environment is dynamic. Last week’s creation of the 10,000 community police force is one example of this.

On the civilian front, corruption, poor development, and ineffective governance remain priorities. Internationally, the Afghan government is often viewed as both essential to and an obstacle to success. But there is no quick fix, especially for external actors that compete for influence. In contrast to developing Afghan military and police forces, there is no corresponding process to grow politicians, activists, and entrepreneurs. These grow and mature in their own time.

International efforts remain focused on fixing the government in Kabul, thus stifling the growth of politics and business elsewhere in Afghanistan. Commentators are starting to take notice of the limits of relying on a strong central government and are looking at Afghanistan’s history to see there are alternatives. Steve Biddle, Fotini Christia, and J. Alexander Thier argue in Foreign Affairs:

From the end of the Second Anglo-Afghan War in 1880 to the coup of Mohammad Daud Khan in 1973, Afghanistan underwent a relatively stable and gradual period of state-building. Although the country was an absolute monarchy until 1964, Afghanistan’s emirs, on the whole, needed the acquiescence of the population in order to govern. The central government lacked the strength and resources to exercise local control or provide public goods in many parts of the country. Instead, it ruled according to a series of bargains between the state and individual communities, exchanging relative autonomy for fealty and a modicum of order.

Decentralized governance is not only historically grounded in Afghan history but also theoretically important for democracy.

In the United States, we know decentralized government as federalism, which divides sovereignty between the national government and those of the 50 states. The division is not neat and the struggle for equilibrium of federal roles, states’ roles, and individuals’ rights has been constant.

Still, state and local governments remain more influential than the federal government on Americans’ lives, with security, economic opportunity, and social freedoms largely outside of Washington’s control. For example, drivers’ licenses, credit cards and bank cards are regulated by states; criminal law is largely created and enforced primarily at the state level; marriages are regulated at the state level; births are recorded at the county level; school curricula and funding are primarily controlled by cities and school boards. There are 50 state governments and 80,000+ other forms of government in the United States that create laws, provide public goods like education and roads, and govern citizen behavior in unique ways. This can be problematic for the federal government (consider drug laws), but the variation is often considered a key feature of democracy. That is, the government closest to the people is considered the ideal.

We should expect no less for Afghans.

Derek S. Reveron, an Atlantic Council contributing editor, is a Professor of National Security Affairs and the EMC Informationist Chair at the U.S. Naval War College in Newport, Rhode Island. The views expressedare his own and do not reflect those of the Navy or the U.S. government. . Photo credit: Reuters Pictures.