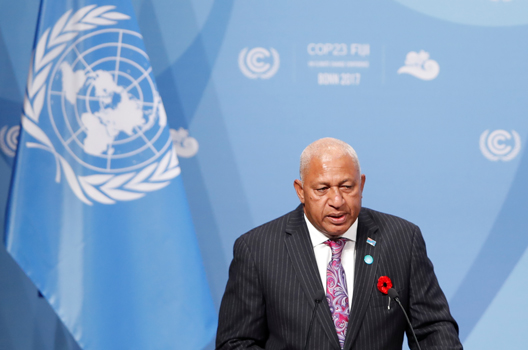 Despite all eyes on the United States in the wake of US President Donald J. Trump’s decision to withdraw from the Paris Agreement, Fiji, the host of the twenty-third Conference of the Parties (COP23), framed the conversation in Bonn around the challenges climate change poses to small island nations and how larger, wealthier nations can help.

From November 6-17, climate negotiators, non-governmental organizations, and other stakeholders gathered in Bonn, Germany for COP23. This year’s United Nations (UN) climate summit represented a few interesting “firsts.” It was the first meeting to take place since Trump announced in June his intention to withdraw the United States from the Paris Agreement in favor of pursuing a coal-based energy mix, and it was the first UN climate summit to be chaired by a small island nation, Fiji.

Understandably, a significant amount of attention surrounding COP23 has focused on the US intention to withdraw from the Paris Agreement and the group of US mayors, governors, and businesses who attended COP23 to show that climate change is still on the US agenda. However, large, diverse countries like the United States have not yet felt the effects of climate change as acutely as a small island nation like Fiji.

At COP23, President of Fiji George Konrote highlighted the challenges faced by smaller nations as a result of climate change, and called for alternative solutions that must be devised in order to help them survive.

Small island nations are particularly vulnerable to the threats of climate change for several reasons, but the most predominant is sea level rise. The 2014 National Climate Assessment states that “global sea level has risen by about 8 inches since reliable record keeping began in 1880. It is projected to rise another 1 to 4 feet by 2100.” This degree of sea level rise spells devastation for many island nations. For example, most islands that make up the Marshall Islands sit at less than 6 feet above sea level.

People in vulnerable coastal areas also face other, increasingly pronounced ramifications of climate change. On land, food security and the agricultural sector are threatened by both excessive rain  and by drought. For many island nations, intruding ocean water contaminates and erodes fertile soil, drinking water can become increasingly salinized, and susceptibility to food- and water-borne diseases can increase. That is not the only challenge—many of the residents of small island nations rely on the ocean for their livelihood. Climate change has caused reef degradation, leading to the migration of critical aquatic species to more habitable areas, changes in aquatic ecosystems and food chains vital to economic activity, ocean acidification, and increasingly extreme weather events. COP23 host Fiji still has yet to recover from the damage done in 2016 by tropical cyclone Winston,  the strongest ever recorded on the island nation.

For the people living in these situations, the stark reality of climate change is impossible to ignore. About 1,700 residents of the Carteret Islands in Papua New Guinea have been named the world’s first environmental refugees, and while the resettlement process to other parts of the island is ongoing, it is often stymied for political and financial reasons. Oover 20,000 climate refugees from the Marshall Islands have emigrated to the United States due to extreme weather conditions. As expressed by Fijian Prime Minister Frank Bainimarama in Bonn, the leaders of small island nations feel a deep responsibility to protect those who are vulnerable today, as well as to protect the interests of the generations to come, while preserving their way of life.

In his opening remarks at COP23, Bainimarama said: “I bring a particular perspective to these negotiations on behalf of some of those who are most vulnerable to the effects of climate change…We owe it not to ourselves but to future generations to tackle this issue head on before it is too late.”

Younger generations affected by these visible changes to their homes have also taken advantage of this opportunity to galvanize the global community in support of strong climate action. Timoci Naulusala, a twelve-year-old from Fiji, won a children’s Climate Week speech competition and was invited to speak at COP23. In his impassioned plea, Naulusala detailed the experiences his fellow Fijians face, saying: “The sea is swallowing villages, eating away at shorelines, withering crops. Relocation of people…cries over lost loved ones, dying of hunger and thirst. Its catastrophic. It’s sad…but its real.”

Ultimately, Fiji’s COP23 presidency provided an incredible opportunity for small, vulnerable island nations  to shift the focus of Bonn’s climate talks to topics that are not typically prioritized. Often, the loudest voices at international conferences, belonging to the most influential nations, focus on the issues of larger, wealthier countries. In doing so, they prioritize talks on the role of industry, the power sector, and transportation. By emphasizing an alternative facet to the challenge of climate change, Fiji took advantage of its role as COP23 president by not only highlighting the climate risks of small island nations, but also by emphasizing the kind of cooperation that is required to face these very real, very present threats.

Bainimarama emphasized this in his opening remarks by mentioning the drua—a Fijian canoe—which sat in the foyer of the conference “to remind us of our duty to fill its sail with a collective determination to achieve our mission.”

The voices that represented small island nations at COP23 were heard. On November 12, a special initiative was launched at COP23 “to protect people living in small island developing states from the health impacts of climate change.” The initiative aims to ensure that the advice of health leaders is acknowledged, to garner support for businesses to invest in climate change solutions and health measures, to promote resilience policies, and to increase financial support related to climate and health in small island nations. This initiative constitutes just one step toward ensuring that global climate action is inclusive of all nations, particularly the most vulnerable. After all, as Bainimarama phrases it: “we are all in the same canoe.”