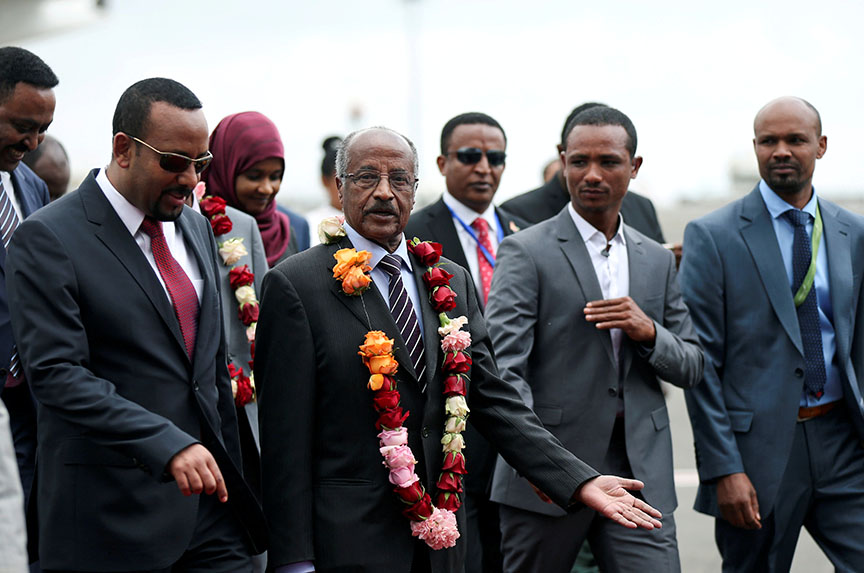 The leaders of Ethiopia and Eritrea on July 9 signed a declaration ending the state of war between the two countries.

The summit between Eritrean President Isaias Afewerki and Ethiopian Prime Minister Abiy Ahmed in the Eritrean capital, Asmara, on July 9 marked the first time that the neighbors’ heads of state have met in nearly two decades.

Nearly 100,000 people were killed in a border war between the two Horn of Africa neighbors from 1998-2000. Ethiopia and Eritrea had been in a state of “no war, no peace” ever since.

Bronwyn Bruton, director of programs and studies and deputy director of the Atlantic Council’s Africa Center, discussed this important development in the Horn of Africa with the New Atlanticist’s Ashish Kumar Sen. Here are excerpts from our interview.

Q: What have the leaders of Ethiopia and Eritrea agreed to and why is it significant?

Bruton: The peace between Ethiopia and Eritrea in some sense is completely shocking because it has taken so long to get to. But it is important to bear in mind that the reason it has taken so long is entirely because of a small group of people inside Ethiopia—the old liberation fighters from the Tigrayan ethnic minority—who have refused to make peace in violation of  international law since 2002.

Ever since an international boundary commission ruled in 2002 that flashpoint territories belonged to Eritrea, Ethiopia has put up one excuse after another to avoid giving that territory back. This refusal to surrender the territory has been partially pragmatic and partially a matter of pride. After fighting alongside Eritrea to liberate Ethiopia from the communist Derg party, the leaders of the revolutionary movement felt indebted and consented to Eritrea’s independence. But then the Tigrayans were blamed by the majority tribes for “losing” Eritrea and, along with it, Ethiopia’s only access to the sea. It was considered to be one of [the late prime minister of Ethiopia] Meles Zenawi’s greatest failure—a black mark hanging over his and his party’s head. So the Tigrayans have always conspired to get Eritrea back and it has been a matter of national pride.

Q: How after years of stalemate has this declaration happened so quickly?

Bruton: Since the Tigrayan elite has lost power, sanity has simply prevailed. Once you take the issue of Tigrayan pride out of the equation, the plain logic of this situation is that both Ethiopia and Eritrea stand to gain immeasurably from peace—not only in terms of the massive economic benefits, which will accrue to both sides, but also in terms of regional peace and stability. Both Eritrea and Ethiopia have pursued proxy warfare in the absence of a regular armed conflict. Now that that’s done, the entire Horn of Africa region stands to benefit.

Q: What specifically does this mean for Ethiopia and Eritrea?

Bruton: It is not entirely clear what it means right now. Events have unfolded at breakneck speed, and it appears that many of the details have yet to be determined. What the leaders of both Eritrea and Ethiopia have jointly stated is that a full normalization of relations will occur, and in the short term that will involve opening the border, giving Ethiopia access to the ports, reopening the embassies that have been shuttered since 1998, and resuming flights between the capitals. People will apparently be able to cross the border at will—and no mention has been made of any tariffs on goods. (That was one of the sources of conflict before the war.)

Q: What does this development mean for the United States?

Bruton: For the United States it presents some challenges. In the first place, it is a magnificent opportunity because it will allow for increased stability. On the other hand, the United States has set up a kind of alternate reality in the Horn of Africa for many years, in which Eritrea was a “spoiler,” and was sanctioned, while the Tigrayan minority regime in Ethiopia was held up as a model partner and the shining white knights of US counterterrorism efforts. Now the Tigrayans have been thrown out of power, and overnight, democracy and peace seems to be spreading magically across the Horn of Africa—showing what might have been achieved so much earlier, if only the United States had not fought so hard to keep the old authoritarian regime in power. Neither the Eritrean government nor the Ethiopian people are likely to forget the US role in their long years of suffering, so Washington has some real repair work to do. In this one respect, it may actually be helpful that the Trump administration has put so much distance between itself and the Obama administration’s approach. They can try to disown the old policies and get a fresh start. But it may or may not work. By all appearances, Abiy intends to be a truly democratic, populist leader, and as such he may or may not be interested in courting US favor by pursuing Washington counterterror objectives across the region, at the risk of Ethiopian soldiers’ lives. That remains to be seen.

Washington will also have to contend with a newly invigorated Eritrea, which is poised to take a leadership role on the regional stage. There’s a strong upside to that: Eritrea could be extremely helpful in resolving the conflict in South Sudan, for example, and could help the United States make progress in Somalia. But Eritrea is likely to seek progress by pointing out how badly US policy has performed in those countries, and by suggesting entirely new approaches that the United States may or may not find palatable. Eritrea, for example, has always talked about the importance of negotiating with all the actors in the Somali conflict, not just the pro-government actors—including parts of the terrorist group al Shabaab. That is the right approach to take, in my view, but something that the United States has fiercely resisted, and may continue to resist now, even in the face of an overwhelming lack of progress in resolving the conflict in Somalia.

The bottom line is that a partnership between Isaias in Eritrea and a true democratic leader in Ethiopia will allow for the creation of a more authentic regional voice to counter American assumptions about the Horn. Washington is likely to find itself out of the driver’s seat at a time when it’s already worried by the growing Arab influence in the Horn. This is a reality that’s evident in the peace process itself: it’s something that Ethiopia and Eritrea sorted out completely by themselves, with precious little reference to the United States. To the extent that any outside actor is receiving credit for massaging the peace process along, it’s Saudi Arabia and the United Arab Emirates that people are pointing to. That is unfortunately the “new normal” that Washington is going to have to contend with—it used to be the only game in town, and now it’s not even the biggest game in town. In terms of influence, it’s lining up behind China and the Gulf States.

Q: How should the United States respond to this development?

Bruton: The United States will certainly celebrate the end of the border conflict, but I fear that it is poorly positioned to capitalize on the development because the Trump administration is so distracted by other events.

The United States is going to be challenged because a lot of the newly empowered actors in the Horn of Africa—including the Ethiopian opposition that is now in power and the Eritreans—have long regarded it as a malign influence. The United States has put all of its military, political, and economic weight behind the Tigrayan elite and this Tigrayan elite has brutalized the Horn of Africa. They have robbed the Ethiopian people, they have kept Eritrea in a state of emergency for twenty years, they have imprisoned journalists and democrats as terrorists, they have invaded Somalia. They have done a whole host of awful things that the United States has either actively supported and condoned.

Now that the balance of power has shifted, the United States has to come to terms with what it has done. It is going to have to envision a new way forward that is much more constructive and much more collaborative than the strategy that it has used in the past. It now doesn’t have an authoritarian regime doing business with it [in Ethiopia].