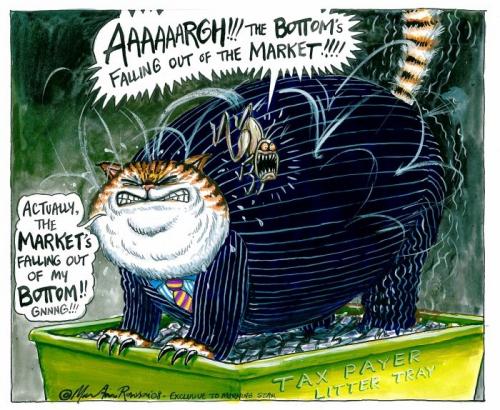 Last week Iceland was put up for sale on eBay allowing users “a unique opportunity to buy a Northern European country.” The auction began at a modest 99p but soon rose to £10,000,000 ($18,000,000). Bids, however, plateaued around that mark after it was revealed that Björk was not included in the price.

The financial crisis has spurned a kind of gallows humor over the past weeks, with jokes concerning plunging shares and economic turmoil doing the rounds amongst CEOs (Chief Embezzlement Officers) and those on Main Street. The humor has been appropriately dry, from the optimistic banker who irons five shirts on Sunday, to the investor who sleeps just ‘like a baby’, waking up every hour to cry. Or the hedge fund manager who complains that it’s worse than a divorce: he’s lost half his net worth yet remains married.

Iceland has seen the brunt of the jokes after its economy and stock market effectively collapsed, leading Prime Minister Geir Haarde to request funding from the International Monetary Fund (IMF). According to one joke, if a geography teacher asks what the capital of Iceland is, the correct response would now be “about $6.50.”

However, some have failed to see the funny side of the Icelandic meltdown. British Prime Minister Gordon Brown was furious that Iceland did not equally compensate U.K. investors and hit back by freezing assets of the Landsbanki bank using anti-terror legislation. Yet even he could afford a humorous quip during a recent speech at the Foreign Office in London. On hearing a cell phone ringing, he pondered aloud “I don’t know if another bank has fallen,” winning loud laughter from the crowd.

Indeed it seems that humor has become the de rigeur method for dealing with the sometimes baffling global crisis. In New York the clock that measures U.S. national debt ran out of digits as the figure surpassed the $10 trillion mark. When that happens, what else can one do but laugh? And as psychologist Mike Lowis points out, it is not callous to make light of our own or other people’s suffering; it is merely a way of coping with difficulties that we can’t do much about. “Logic is the first way of coping. And when that fails, then the coping mechanism switches from the more rational left side of the brain to the more creative right side of the brain,” he said. When billions of dollars of taxpayers’ money are on the line it is probably wise to maintain a little levity. In wake of the U.S. $700 billion bailout, blogger Jim Henley wondered if it would “save administrative costs if I just started giving my money to random rich people?”

And it is these “rich people” who have become the main focus of attack for comedians. Jokes in this vein attack the faceless bankers, stockbrokers and corporate bigwigs who have attracted much of the blame for the crisis.

Have you heard the one about the licentious investment banker? Resolving to surprise her husband, an investment banker’s wife pops by his office. She finds him in an unorthodox position, with his secretary sitting in his lap. Without hesitation, he starts dictating, “…and in conclusion, gentlemen, credit crunch or no credit crunch, I cannot continue to operate this office with just one chair!”

Another asks the difference between an investment banker and a pigeon; the punchline being that a pigeon can still make deposits on new Ferraris. Or, how many stockbrokers does it take to change a lightbulb? The answer is two: one to take out the bulb and drop it, and the other to try and sell it before it crashes.

Yet these attepts at levity and mirth only blind us from the truly dire state of the global economy. It would be imprudent to end on a positive note in light of this current crisis. Instead I will leave you with this shocking report on how the credit crunch has impacted the Japanese banking system: Following the problems in the sub-prime lending market in America and the U.K., uncertainty has now hit Japan. In the last 7 days Origami Bank has folded, Sumo Bank has gone belly up and Bonsai Bank announced plans to cut some of its branches. Yesterday, it was announced that Karaoke Bank is up for sale and will likely go for a song while today shares in Kamikaze Bank were suspended after they nose-dived. While Samurai Bank are soldiering on following sharp cutbacks, Ninja Bank are reported to have taken a hit, but they remain in the black. Furthermore, 500 staff at Karate Bank got the chop and analysts report that there is something fishy going on at Sushi Bank where it is feared that staff may get a raw deal.