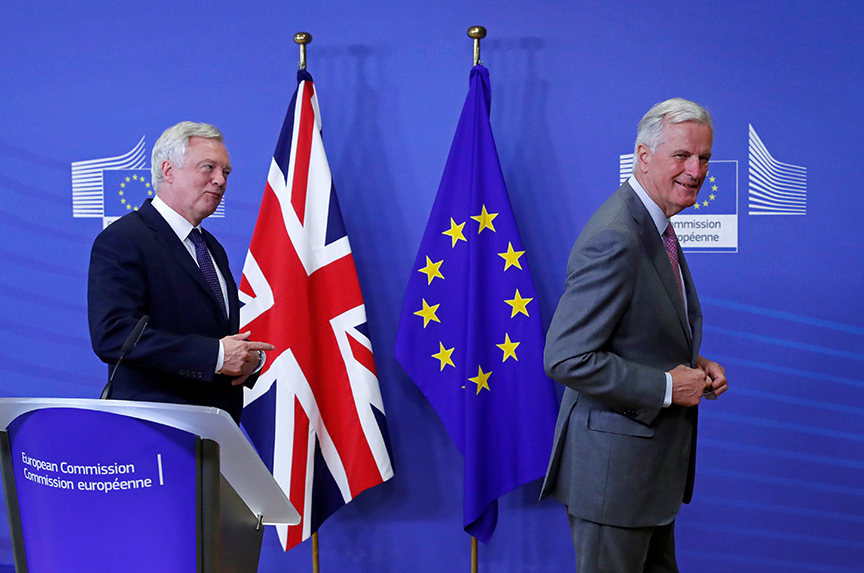 British Prime Minister Theresa May’s government began substantive negotiations to leave the European Union (EU) in Brussels this week, although nobody in Britain is yet clear about what outcome the country is actually seeking. With May’s government in disarray, and her Cabinet wracked with infighting and confusion over Brexit, there is even a growing belief in some quarters that the country could, and perhaps should, end up staying inside the EU.

Until very recently, even mentioning such a possibility was politically and socially taboo. Supporters of the Leave campaign, which won the June 2016 EU referendum by 52 percent to 48 percent, had intimidated most of the rest of the country into believing that the “will of the people” must be obeyed, and that no dissent or deviation would be tolerated.

Now a few politicians are beginning to talk openly about the possibility of dumping Brexit—including the popular Sir Vince Cable, prospective leader of the small pro-European Liberal Democrat party and the highly unpopular former Labour Prime Minister Tony Blair. Articles are beginning to appear asking whether there is a chance that Britain could remain in the EU, and in the Financial Times, columnist Gordon Rachman writes, “The campaign to stop Brexit is gathering pace.”

Also this week, some sixty-five leading figures from Scotland, in a letter to newspapers, appealed to the country to “think again” about the referendum decision.

Opinion polls give no definitive evidence of a shift in public opinion, although you can find straws in the wind if you look at the right figures. For example, in three YouGov polls in June those who said Britain was wrong to leave the EU for the first time outnumbered those who said it was right—albeit by a narrow 45 percent to 44 percent average. Other experts more vaguely discern a gradual, if slight, change in the public mood since the referendum.

Just over a year ago, May swept into 10 Downing Street proclaiming that “Brexit means Brexit,” a tautological slogan meant to show steely determination to implement the referendum result no matter what. In a further display of toughness in January she coined another battle cry, “No deal is better than a bad deal,” and in March duly notified Brussels of Britain’s intention to depart in two years’ time.

Then it all came undone. May foolishly called a “snap” election for June 8—after promising not to—confidently believing that she would increase her parliamentary majority and strengthen her mandate for a “hard” Brexit, in which Britain would leave the EU single market and customs union, escape the jurisdiction of the European Court of Justice, and introduce restrictive border controls on EU migrants.

Her gamble failed. After a disastrous and ill-thought-out campaign, May lost her parliamentary majority and has had to cobble together a controversial pact with ten Northern Irish Democratic Unionist Party MPs to stay in office. Far from strengthening her leadership, she has lost almost all her authority, and only remains in office because her fellow Conservatives fear a divisive leadership battle and want at all costs to avoid another election.

That has not stopped constant plotting by rival factions behind the scenes and an increasingly nasty internal conflict waged through leaks to the press. Attacks have mounted on Philip Hammond, the Chancellor of the Exchequer, for seeking to “undermine Brexit” by attempting to keep close future ties with the remaining twenty-seven EU countries—to such an extent that May had to admonish her Cabinet this week to stop knifing each other in background briefings to newspapers.

There are three main reasons why the clashes and confusion about Brexit should not be surprising. First, the referendum provided no guidance on what a Leave vote would mean in terms of Britain’s future relationship with Europe, thus starting rather than settling the argument over different Brexit formulas—“hard,” “soft,” Norwegian, Swiss, or even Ukrainian-style, and so on.

Second, while the immediate economic crash predicted by some Remain advocates has not materialized, negative economic impacts of the Leave vote are beginning to appear. The pound has plunged, growth is slowing, investment falling, and inflation beginning to rise. The economy faces a shortage of skilled labor as EU migrants flock back to their home countries.

Third, May’s stunning electoral collapse is widely seen as having invalidated her mandate for a “hard” Brexit, opening the field to other contending solutions. And the arguments and turmoil over different possible options are making more people wonder whether the whole Brexit mess is worth pursuing—and whether May or any other government leader is capable of delivering a good deal with Brussels.

With the opposition Labour Party also split on Brexit—though not as severely as the Conservatives—it is becoming clear that passing the vast amounts of legislation needed to disentangle Britain from the EU will be a colossal nightmare. May’s minority government is at great risk of parliamentary upsets and faces determined opposition from the Scottish and Welsh governments, who believe that the Brexit legislation will threaten powers they have arduously won for themselves from the central Westminster government.

In what has been widely seen as a sign of weakness, May has invited opposition parties to offer cooperation and ideas for help in ensuring the success of Brexit and other policies. It is hard to imagine the Labour leader, Jeremy Corbyn, throwing out a lifeline to May, when his top priority is to win a new election in the fall.

Reversing Brexit is probably technically and legally possible, at least until the date when Britain is due to leave the EU in March 2019. Only a few are currently advocating it. The big question is whether the trials and tribulations that Brexit is creating will be powerful enough to change the public’s mind before the deadline.

Image: UK Secretary of State for Exiting the European Union David Davis (left) is welcomed by the European Commission’s Chief Brexit Negotiator Michel Barnier at the start of a first full round of talks on Britain’s divorce terms from the European Union in Brussels, Belgium, on July 17. (Reuters/Yves Herman)