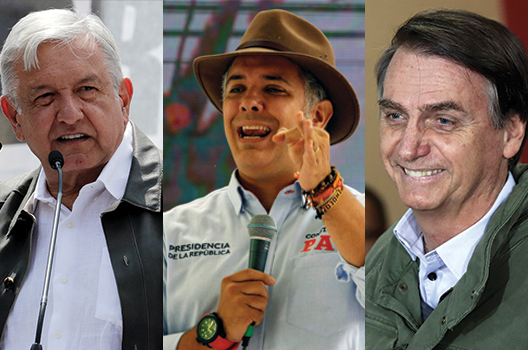 In 2018, the three largest countries in Latin America—Colombia, Mexico, and Brazil—elected new heads of state. Colombia voted in its youngest president, Iván Duque; Mexico elected left-wing populist Andrés Manuel López Obrador (AMLO); and Brazil chose former army captain and right-wing candidate Jair Bolsonaro. As the three leaders kick off their respective mandates, and as other elections shape up in the region, the Atlantic Council’s Adrienne Arsht Latin America Center highlights five overarching trends that warrant a closer look and that are likely to affect the region over the next five years.
1.     Social media as the new harbinger of democratic discourse

An ongoing byproduct of a hyper-connected world, social media shook elections at their core in 2018—throwing into question traditional components of campaign execution and information consumption as voters increasingly turned to Facebook, Twitter, and WhatsApp for election-related news and discussions. Particularly in Brazil, television and radio air time and campaign financing—well known for contributing to victories in past elections—gave way to conversations conducted online and on messaging applications. The most popular of all candidates on social media, with more than eight million followers on Facebook, Bolsonaro built a direct bridge between his campaign and his electorate with social media. This strategy helped him win the election in October.

In Mexico and Colombia, social media also served as a platform for debate and information-sharing among voters. Though not the only catalyst for electoral success, the increasing significance of social media platforms in elections and the public policy sphere represent a pattern seen around the world: with US President Donald J. Trump and his tweets, with Indian Prime Minister Narendra Modi and his Twitter presence, Canadian Prime Minister Justin Trudeau’s strong presence on Twitter, and now, Bolsonaro on Facebook and WhatsApp in Brazil. Candidates vying for leadership positions in Latin America are sure to continue to capitalize on this recent and evolving trend as they aspire to connect with voters.

The exponential role of social media as a tool for candidates to speak directly with their constituents has also generated new challenges. While social media has been a source of information for its users, it has also opened doors for the sharing of untruthful, exaggerated, or out-of-context information. With distrust in traditional and established media at an all-time high in Latin America, disinformation jeopardizes the ability of users—and voters—to make informed, conscientious decisions. With the objective of forging digital resilience in the lead up to and during critical presidential elections in three of Latin America’s most connected and geopolitically important democracies, the Atlantic Council’s Adrienne Arsht Latin America Center and Digital Forensic Research Lab focused on identifying and explaining cases of disinformation in Colombia, Mexico, and Brazil during this year’s election cycles. Into 2019, we will continue to advance efforts to combat disinformation and create digital resilience in Latin America and other regions.

All three new leaders—AMLO, Duque, and Bolsonaro—represented an anti-establishment movement in their countries. Each voiced the dissatisfaction and distrust of the population by espousing discourses against the status quo, effectively portraying themselves as outsiders. AMLO referred to the “power mafia” in reference to the traditional PAN and PRI parties’ politicians and promised to “end the corruption, the impunity, and the privileges enjoyed by a small elite,” so “leaders of [Mexico] can recover their moral and political authority.” Duque won with the promise of “a new generation” of leadership for a country dominated by a long-established elite and still emerging from half a century of civil conflict, according to the Financial Times. Bolsonaro advanced a narrative against “Brazil’s corrupt politicians” and criticized traditional media, appealing to his electorate against traditional news outlets, including Folha de S. Paulo, one of Brazil’s largest newspapers.

4.     A nationwide discourse against corruption

AMLO, Duque, and Bolsonaro advanced a platform against corruption as one of the major pillars of their campaigns. Bolsonaro praised himself as one of the few politicians in Brazil not embroiled in a corruption case. AMLO tied corruption as a contributing factor to the security issues in Mexico, saying “this evil is the main cause of social and economic inequality, and also that corruption is to blame for the violence in our country.” Duque’s stance focused on impunity, as he stated his administration would “take back the last peso stolen by the corrupt. Impunity will not reign anymore” in Colombia.

Such renewed focus on anti-corruption representation and efforts is a trend expected to become even stronger throughout Latin America, as the Lava Jato investigation uncovered cases of corruption beyond Brazil’s borders, raising awareness to this structural issue across the region.

5.     Security as the number one concern

Security was the hot topic of these presidential elections, and all three candidates offered specific innovative agendas to address the issue of insecurity and violence. In Colombia, Duque proposed changes to the peace accord with the FARC to enforce the rule of law and to tackle criminal drug gangs, the ELN guerrilla, and the rise in illicit crops. In Mexico, AMLO said he would “reformulate the security policy that is almost exclusively based on the use of force,” arguing against fighting violence with violence. In Brazil, Bolsonaro, who was widely considered to be the “law-and-order” candidate, offered a range of proposals, including changes to gun control policies, less resistance to police use of deadly force, and lowering the legal age of criminal responsibility. The success of these new approaches to security policies will surely affect the popularity and governability of the new administrations.

The newly elected presidents and their innovative points of view are an opportunity for further dialogue between the government and opposition; greater political involvement of the population, civil society, and media, beyond the election period; and a stronger set of institutions to hold the executive and the legislative branches, as well as other organizations accountable and aligned with democratic principles. The next four years are an opportunity for each government to implement reforms necessary for the growth and development of the region’s three largest democracies.

Valentina Sader is a project assistant with the Atlantic Council’s Adrienne Arsht Latin America Center. Follow her on Twitter @ValentinaSader.

The Atlantic Council’s Adrienne Arsht Latin America Center focuses on the region’s strategic role in a global context. The Think Five Blog Series, launched to mark the Center’s fifth anniversary, reflects on major transformations set to redefine the trajectory of the region now and in the years ahead.