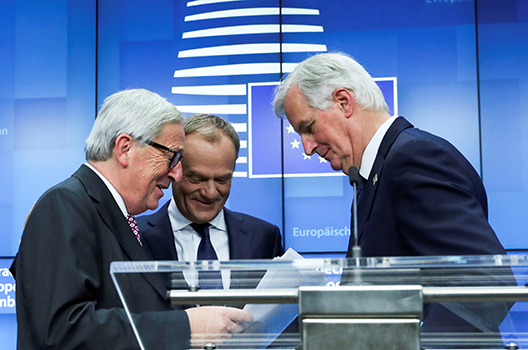 It is time for the European Union to rethink its approach to the Brexit negotiations.  Unable to reach consensus, Britain is sliding toward a “no deal” scenario, which will be damaging for everyone, including the twenty-seven EU member states (EU27). The EU has every right to drive a hard bargain, and especially to preserve the essence of membership, including the “Four Freedoms” of movement for goods, capital, services, and labor. But unless the exit agreement and the future relationship are finalized together, Britain will not know its path forward, and could easily stay in political crisis until it falls off the cliff.

When the United Kingdom launched the process of leaving the EU, one of the first decisions made by the parties was whether to negotiate the specific “divorce” arrangements separately from those that would determine the UK’s future relationship with the Union. Given the shortness of time, the EU pushed successfully for the exit agreement to be completed before starting discussions on any future partnership. This gave Brussels maximum leverage, especially since the EU27 decide whether negotiations can be extended. But by seeking that maximum advantage, the EU has inserted a poison pill into the negotiations, one that has prevented the development of a British consensus and that now threatens future partnerships between the two. Yet both Britain and the EU need those partnerships, not only in trade and investment, but also in security, intelligence, and even academic research.

The blame for Brexit lies overwhelmingly with those who steered their country away from the EU with little understanding of the complexities and costs involved; they ignored the many elements of the UK – EU relationship that would be torn asunder and the impacts on the British economy and society. But the EU, by sequencing first the exit accord and only later the building of the future relationship, has constructed a deal which is unacceptable in the UK. The so-called “Irish backstop,” which continues the EU customs arrangements and single market in Northern Ireland until new arrangements are concluded, has alienated vital allies of British Prime Minister Theresa May, including the Northern Irish Democratic Unionist Party.  More broadly, the lack of any specificity about future arrangements, including a free trade agreement (FTA) and customs arrangements, has made many Britons, especially those favoring Brexit, suspicious that the EU intends to hold Britain in the limbo of a post-exit transition period for perpetuity. Many who helped defeat the exit agreement in Parliament were not Remainers, but Brexiteers who feared that the UK would never be independent.

To move forward, the EU should agree to a significant extension of the Article 50 negotiating period, a time long enough that progress can be made in negotiating the FTA and customs arrangements. The exit agreement would remain as it is now — there is no need to reopen it – but it would not be ratified. Instead, the focus would be on negotiating the future relationship, so that when Britain does leave, it steps immediately into a new type of partnership with the EU. Any extension that is focused on fine-tuning the exit accord will inevitably fail, as long as there is no vision of the future partnership.

Why not approve the exit accord now and move to a transition period as planned, during which the future arrangements could be negotiated? Because there is not enough trust of the EU among enough British MPs to assure passage of the exit accord without a final agreement on the future — this was clearly demonstrated by May’s historic defeat. Although the alternatives of an extension of Article 50 or a transition period seem similar, politically, they are miles apart.

Of course, no extension can be indefinite. And there will always be a tendency to reach agreement at the very last moment. So, any extension must be frequently reviewed and renewed — at least every six months. Because the Lisbon Treaty requires all twenty-seven EU member states to approve any extension, the EU will continue to hold most of the leverage. Granting extensions rather than a transition period will cost the EU nothing in ultimate bargaining power.

One difference between an extension versus a transition is that presumably the UK would remain an EU member until the exit agreement is ratified. Britain already does not participate in EU internal discussions about Brexit. Its engagement in EU policymaking has faded since the Brexit process began, but overall, UK participation in most policy areas is of mutual benefit. Britain would quickly have to organize a European Parliament election (which may turn into a very interesting mini-referendum). Most likely the British MEPs would sit for at least two years of the five-year term, and then their seats would be vacated, to be redistributed in the next Parliament.

None of this will be easy. Some in Britain will call foul over further delays in Brexit and some in the EU27 will deplore an extension as long as the British cannot make clear their ambitions. But on its own, the exit agreement is dead, and there is no consensus for another referendum. The alternative of “no deal” is too disruptive and dangerous to contemplate. Unless a significant extension is granted that allows negotiation of the future relationship before the exit agreement is approved, “no deal” could become reality.

Frances G. Burwell is a distinguished fellow at the Atlantic Council and a senior advisor at McLarty Associates in Washington.