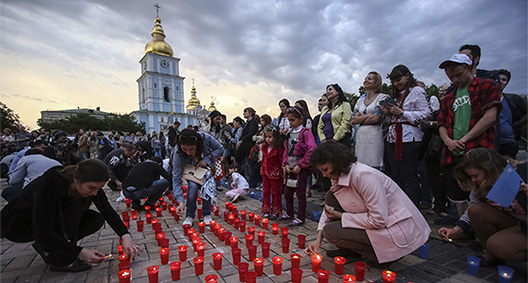 Crimean Tatars and local residents light candles during a memorial ceremony marking the 70th anniversary of the deportation of Tatars from Crimea, in Kiev May 17, 2014. REUTERS/Konstantin Grishin

In the dark first hours of May 18, 1944, Soviet army convoys rumbled into the villages of Crimea’s native Tatars and began forcing 230,000 of them into exile. Soldiers packed the Tatars into rail cars, typically without food or water, to be hauled to Central Asia. The bodies of those who died enroute were dropped onto the trackside. Nearly half of the Tatars succumbed within a few years to starvation and neglect. Since the 1992 collapse of the Soviet Union the survivors have rebuilt their community in Crimea as part of independent Ukraine. Ukraine’s 2001 census counted about 243,000 Tatar deportees and their descendants back in Crimea.

On the seventieth anniversary Sunday of Josef Stalin’s deportation of the Tatars from Crimea, thousands of Tatar residents of the peninsula defied a ban by the Russian-backed Crimean administration and gathered for a public rally. They both commemorated the 1944 atrocity and protested Russia’s eighty-one-day-old seizure and occupation of Crimea. The BBC estimated the crowd, in the Akmechet neighborhood of Simferopol, at 10,000; the locally based Crimean News Agency reported it around 15,000.

With the world’s Ukraine focus these days on the violent attacks by Russian-backed gunmen in the Donetsk region, Russia’s occupation of Crimea gets much less attention. Some observers, such as former U.S. ambassador to Russia Jack Matlock, have argued that the West should accept now that Russia will keep Crimea, and even that Ukraine is better off without it. But policymakers in the United States, Europe, Ukraine and Russia should regard Sunday’s demonstration as a reminder that the Tatars – who have fought for decades to return from exile – will not give up their new struggle, against Russian force, for a secure future in their homeland.

On May 16, US Secretary of State John Kerry recalled the deportation of 1944 and expressed “solidarity with Crimean Tatars today” against Russia’s illegal takeover. This statement is much more realistic than the Geneva agreement that Kerry reached April 17 with top diplomats of the European Union, Russia and Ukraine. That document, intended as a first step toward solving the Ukraine crisis, took no notice of Russia’s illegal act. That omission left many Tatars feeling abandoned to defend themselves against the Russian military occupation and its protégé, a Crimean administration whose history and cultural roots are not in any form of politics, but rather in organized crime.

The Russian troops and their allied mafia power structure have begun a systematic repression of the Tatar community and its democratic aspirations. This has included the mutilation and killing of Tatar community activist Reshat Ametov in March, the Crimean administration’s ban on public gatherings, Russia’s exile of the Tatars’ leader, and intimidation of Tatar settlements by patrols of masked gunmen. “Local ‘authorities’ announced that Crimean Tatars will have to vacate their property and give up their land. Crimean Tatars have been assaulted for speaking their language,” Kerry correctly said on May 16.

The Tatars understand that they now face a long, new struggle and more suffering to achieve the liberation of Crimea from Russia and its return to Ukrainian rule – and so they now define the Russian occupation beginning in February as the third great tragedy of their community. The first of these was the annexation of the Crimean Tatar state in 1783 by Russian Empress Catherine the Great; the second was Stalin’s ethnic cleansing of Crimea in 1944.

One sign of the Tatars’ determination to resist Russian rule has been the consistent statements of the community’s leader, Mustafa Djemilev. At age 70, Djemilev is the consensually respected leader of Crimea’s Tatars because of a background not unlike that of South Africa’s late Nelson Mandela. Djemilev lived for 15 years in Soviet prisons. He spent 303 days on a hunger strike to press Moscow for the Tatars’ “right of return” to Crimea from their Central Asian exile. Poland awarded him its Solidarity Prize this month for his contribution to peace, democracy and human rights. Turkish President Abdullah Gul last month presented Djemilev with his government’s Medal of State – a sign of Turkey’s strong support for the Crimean Tatars’ cause.

Djemilev held a long phone conversation with Putin in March and told the Russian leader that Tatars would not accept Moscow’s rule and would insist on Crimea’s return to Ukrainian control. He since has told reporters that the Tatars’ well organized community leadership body, the Mejlis, is prepared to take its campaign underground if Russia tries to ban it or its activities. “We did not spend more than 50 years in exile to run away at the first threat,” he said.

Djemilev challenged the Crimean regime April 19 when he arrived at Armiansk, a post on what Russia has established as a border between Crimea and Ukraine. Hundreds of Tatars had arrived on the Crimean side, and after phone consultations with their superiors in the Crimean capital, Simferopol, the guards let Djemilev enter the territory.

Djemilev went to the Mejlis headquarters and promptly hoisted the Ukrainian flag out front. Soldiers arrived the next morning and removed it – and the Crimean regime quickly declared Djemilev an unwanted “foreign national” whom Russia banned from entering its territory for five years. On May 2, Djemilev returned to the “border,” where the Russian-backed guards refused him entry. Many among a throng of 5,000 Tatar supporters broke through the border post to meet Djemilev in Ukrainian-controlled territory.

On May 4, the occupation administration’s prosecutor, Natalya Poklonska, visited Djemilev’s closest ally, Mejlis chairperson Refat Chubarov, and warned that if he does not stop “extremist activities” such as supporting Djemilev, the Crimean regime would ban the Mejlis under a Russian law “On Countering Extremist Activities.” The self-appointed Crimean prime minister, Sergei Aksyonov declared that Djemilev is an extremist working for “his masters, Western intelligence agencies, to destabilize the situation in Crimea.”

On Friday, just 48 hours before the Tatars’ remembrance of their exile, Askyonov banned all public gatherings, saying that “extremists” from southeastern Ukraine might come to provoke violence in Crimea – a concern that he apparently did not feel about the Russian parades and speeches celebrating Russia’s Victory Day (its commemoration of the end of World War II) just days earlier.

Dr. Idil Izmirli is a visiting scholar and adjunct professor at George Mason University’s School for Conflict Analysis and Resolution. Her research specialties include the Crimean Tatars and other deported communities in the Eurasian region.