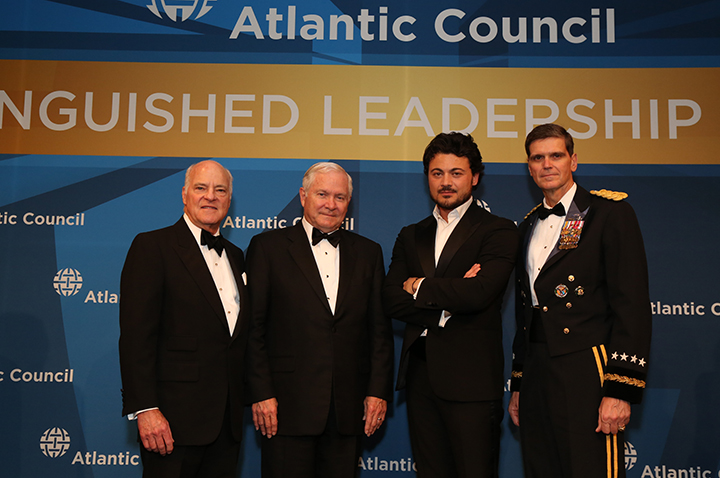 American leaders must “reject isolationism” and Europe must “get its internal security house in order,” former US Defense Secretary Robert M. Gates said at the Atlantic Council’s Distinguished Leadership Awards gala in Washington on May 3.

In his acceptance speech, Gates took a thinly veiled swipe at Republican presidential frontrunner Donald Trump’s embrace of an “America first” policy. “Above all, Americans and America’s leaders must reject isolationism, whether prompted by the need to address domestic needs or the belief that some of our allies are taking advantage of us. Their inaction must not become an excuse for our own,” Gates said.

“Contrary to the views of some politicians, continuing American global leadership is in our own economic, political, and security interest, not simply and only an altruistic act. America turning inward not only will make the world more dangerous for others, but also for us,” he added. Gates’ remarks came on a night when Trump, a New York real estate billionaire, virtually guaranteed himself the Republican Party nomination by winning the primary contest in Indiana. His main rival, Sen. Ted Cruz, dropped out of the race.

Gates ran through a long list of global challenges, which included a growing assertiveness on the part of Russia and China, terrorist threats to the United States and Europe, the migrant crisis flowing from conflict-ridden and failed states in the Middle East and Africa, and deep divisions within the European Union. “In such a world, continued global leadership on both sides of the Atlantic, with all its costs, is more necessary than ever,” he said.

While Trump has said he wants to “make America great again,” Gates maintained that the United States today is “still a great nation.”

“But it cannot, and it will not, remain great if it seeks to escape responsibility and global leadership…only if America leads, can the Atlantic alliance and our other friends and allies work together to secure the future,” he added.

In the wake of terrorist attacks in Paris and Brussels, Gates exhorted European leaders to increase their investment in defense capabilities in order to more effectively deal with the threat of terrorism. The United States, too, must increase its military capabilities both through “spending defense dollars more wisely and finding additional resources to deal with the growing capabilities—both in numbers and technologies—of potential adversaries,” he added.

“As we recognize the accomplishments of four outstanding individuals, we hope to advance a far more ambitious form of leadership that is equal to the challenges of our times,” Huntsman said.

Huntsman noted the wide array of challenges facing the United States, Europe, and their friends and allies—Ukraine’s sovereignty is “still menaced” by Russia, the “bloodshed and instability” in the Middle East persist, Europe’s solidarity “continues to be plagued by an unprecedented set of tests, tearing at the continent’s fabric and endangering Europe’s place on the global stage,” populist movements are on the rise, the Middle East and Europe are grappling with a migrant crisis of historic proportions, and “we must adapt to the reality of China’s rise.”

Yet the most daunting challenge is the shortage of long-term strategic thinking and leadership to navigate these complex challenges, he said, adding that it is “unclear whether our key institutions or leaders will rise to these new challenges, or be overwhelmed by them.”


“As we recognize the accomplishments of four outstanding individuals, we hope to advance a far more ambitious form of leadership that is equal to the challenges of our times,” said Atlantic Council Chairman Jon M. Huntsman, Jr. (ImageLinkPhoto.com)

It is imperative that the United States provide leadership, said Atlantic Council President and CEO Frederick Kempe. “We are driven by a conviction that if United States shapes the future constructively, alongside our allies and friends, we can forge one of the most enlightened, secure, and prosperous periods of world history—fueled by human advance that is empowered by technological and scientific progress,” he said. “If we fail to lead and combine forces effectively, less benevolent forces or chaos will fill the void,” he added.

In June of 2011, in his last major speech as Secretary of Defense, Gates warned of a rising internal threat to the transatlantic alliance. Noting that the United States’ share of NATO defense spending had grown to more than seventy-five percent, he said this fact would lead to a “dwindling appetite and patience in the US Congress—and in the American body politic writ large—to expend increasingly precious funds on behalf of nations that are apparently unwilling to devote the necessary resources to make the necessary changes to be serious and capable partners in their own defense.”

In that speech in Brussels, Gates called on European leaders to reverse the decline in their defense capabilities. A failure to do so would mean “future US political leaders—those for whom the Cold War was not the formative experience that it was for me—may not consider the return on America’s investment in NATO worth the cost,” he said.

That warning has proven prescient. Trump has complained that the United States’ European partners in NATO are “not paying their fair share” and that the Alliance is “obsolete.”

“A lot of Europeans were offended by what I said,” Gates recalled of the reaction to his speech in Brussels. “But that future day I warned of five years ago has arrived, with at least one presidential candidate urging reevaluation of our commitment to NATO—including our troop presence in Europe, and in Asia as well—and other prominent political voices in both parties sounding more isolationist with each passing day,” he added.

Michèle Flournoy, a former Undersecretary of Defense for Policy who served with Gates at the Pentagon, introduced him at the awards dinner. “The more you know Bob Gates, the easier it is to understand why so many Presidents have sought the advice and counsel of this straight-talking Kansan,” she said. “For him, serving in government has never been about Bob Gates. It has been about duty, mission, and country,” she added.

Flournoy described her former boss as “an analyst at heart” and “one of the most effective and impactful Secretaries of Defense ever to hold the office.”

Chuck Hagel, a former US Defense Secretary who served as Atlantic Council Chairman from 2009 to 2013, introduced Votel. The General represents the aspect of “quiet confidence of leadership,” said Hagel who worked with Votel at the Pentagon.

In his acceptance speech, Votel noted that “CENTCOM is a region where there is little chance of a homerun; where our vital interests collide with multiple conflicts, confrontation, and situations. Where our daily challenges are affected by long-simmering and deep-rooted issues that influence the region and indeed spill across our bureaucratic boundaries to often have a global effect.”

“The Atlantic Council provides a unique forum for exploring and debating the many issues that influence and shape our broader national foreign policy trajectory, a role all the more critical given the security trends we bear witness to across the globe generally, and in the greater Atlantic security community more specifically,” Votel said.

“Your efforts to analyze, study, and socialize these dynamics shapes and influence the dialogue on defense and strategic issues in a profound way, providing valuable insights and contributions to matters of utmost importance and consequence,” he added.

Drawing on his recent experience as Commanding General of US Special Operations Command, Votel, who was confirmed as CENTCOM Commander in March, said leaders must be willing to press within their authority and capitalize on opportunities when they see them; they must have relationships built on candor, confidence, and responsiveness; and, most significantly, realize that “people are our most important resource.”

“The best ideas are born from diverse, informed people across the depth and breadth of the organization—it is the role of leadership to seek, hear, and implement those ideas,” he said.

‘A deep bout of schizophrenia’

In his remarks, Kravis dwelt on what the business community can do to reverse the erosion of trust in the economic system.  The world today seems to be afflicted by “a deep bout of schizophrenia,” he said, “so much hope and promise emanating from technology, medical progress, improvements in the living conditions of hundreds of millions of people and yet so much frustration and fear triggered by global competition, technology, anemic growth, stagnant incomes, environmental uncertainties, terrorism, intolerance, and what seem like intractable humanitarian problems.”

In the United States, the post-Cold War consensus on markets, openness, engagement in international institutions, and trade is mired in controversy and could be breaking down, he added. Kravis was introduced by William Goodloe is President & CEO of Sponsors for Educational Opportunity (SEO), a nonprofit organization based in New York City.

Kravis called on business leaders to help rebuild trust in an economic and political system that, “despite its many flaws, is the world’s most powerful force for human advancement, innovation, and prosperity.”

Over the past five years, Kohlberg Kravis Roberts & Co. has invested $5 billion in companies whose mission is to solve critical societal problems, including food safety in China, urban water infrastructure in the United States, solar and wind energy, hospital care, and high quality skills training and education enterprises.

Kravis said American business and its leaders can earn public confidence by delivering on promises to create jobs and profits, but also by actively searching for solutions to common problems ranging from disease, ecological balance, and inequality.

‘Spreading the joy of music’

Francesca Zambello, Artistic Director of the Washington National Opera, introduced Grigòlo. Besides his passion for music, the Italian tenor is passionate about fast cars—he built his Porsche himself from the ground up—and is a certified pilot.

“Tonight, as we honor Vittorio with the Atlantic Council’s prestigious Distinguished Leadership Award, we salute not only his extraordinary talent but his demonstrated commitment to spreading the joy of music,” said Zambello.

Vittorio Grigòlo, a renowned Italian tenor and recipient of the Distinguished Artistic Leadership Award, performed at the awards ceremony. (ImageLinkPhoto.com)

The evening ended on a high note—literally—with an impassionate musical performance by Grigòlo.