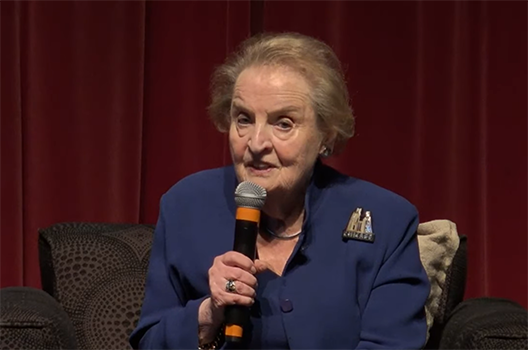 Former US Secretary of State Madeleine Albright knows that her famous description of the United States as the “indispensable nation” could be misunderstood as a boast of her country’s individual power. But in the word “indispensable,” however, “none of it means it has to be alone,” she said on May 30.

Delivering the Chicago Project on Security & Threats’ 2019 Hagel Lecture at the University of Chicago, Albright argued that the challenges of the 21st century require that people work together—both within their own societies and between nations. Whether it be technological change, international terrorism, global warming, or uneven migration flows, Albright said that they all “will require partnership” among people to address. Former US Secretary of Defense Chuck Hagel, who joined Albright on May 30, agreed, saying the United States “needs alliances. We need relationships. We can’t do it alone.”

Albright said that she wrote her recent book Fascism: A Warning because she was “concerned about some of the division in our societies across the board.” These divisions have occurred, she argued, because of globalization, which despite its benefits is “faceless” and in some ways deprives citizens of needed identities, and technological change that “has disconnected people in a strange way” by putting them into echo chambers of their own political beliefs. Both of these developments have fed into hypernationalism, which has capitalized on peoples’ desire for strong identities and weaponized those identities against specific groups. “Fascism is where you find a scapegoat,” she explained, and pointed to groups such as migrants as evidence that this scapegoating is happening again.

To begin to combat this hypernationalism, Albright pointed to the Atlantic Council’s Declaration of Principles as a natural starting point. The Principles call for countries, leaders, and citizens to reaffirm the rights of freedom, justice, peace, security, democracy, free markets, collective action, the right of assistance, and an open and healthy planet, that underpinned the rules-based international order which came about after World War 2.

These principles, Albright said, provide an opportunity to “renew our vows about what it is like to be in the civilized society and be able to work with others.”

Speaking to students at the University of Chicago, she added that “we are looking to the younger generation to really look at those declaration of principles, recognize why they came into existence after World War 2, what about them needs to be refurbished a bit, and how we use them to deal [with challenges ahead].”

Hagel argued that these principles are needed to strengthen the system of institutions and partnerships that has allowed the United States and its partners to meet the challenges of the last seventy-five years. After World War 2, Washington embarked on building this system “because we needed to build a world order that focused on the common interests of all nations and all peoples.”

This international order, although not perfect, is still needed today, he argued. “If we don’t have a system, structures, alliances, and global institutions to work on these things together, we are going to be in a lot of trouble,” he said.

Hagel specifically referenced US President Donald J. Trump’s attempts to negotiate a deal with North Korea over its nuclear program as an example where a unilateral approach shunning international partners has failed. “I don’t see how anything is going to be resolved in North Korea without Japan, certainly without China, and certainly without South Korea,” he said.

Albright agreed, saying, “there are certain problems that can only be handled multilaterally. It doesn’t matter if the United States is the only country doing something.” Rather than shunning international institutions or organizations, Washington needs to start “giving them the tools to work together and to recognize that they really are substantial.”

“The world is a mess,” Albright conceded. But to sort out the large problems we are facing, the way forward is to join together, she argued, not to continue to drift apart.

Image: Former US Secretary of State Madeleine Albright speaks at the University of Chicago in Chicago, Illinois on May 30, 2019.