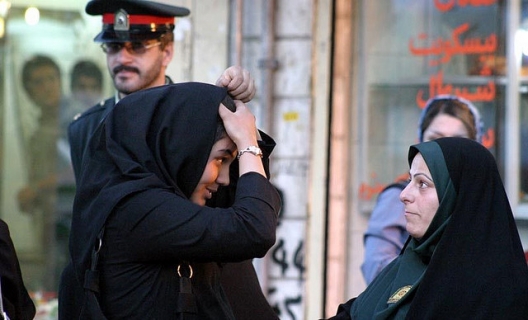 What is it about Iran and Western women journalists?

Foreign reporters who got visas to cover last week’s inauguration of Iran’s new president, Hassan Rouhani, were overwhelmingly female and included me as well as correspondents for NBC and CBS. Historically, women such as Christine Amanpour, Robin Wright and Elaine Sciolino have also reported extensively from Iran. Why did we choose Iran and why does Iran choose us?
For an American reporter of any gender, Iran is a terrific story because of its byzantine politics, regional importance, deep culture and 34-year-old estrangement from the United States. While the U.S. has been stingy in granting Iranian reporters permission to cover our country, Iran has always allowed some American journalists to come to Iran, in part to maintain communication with the United States in the absence of diplomatic ties.

Male chauvinism undoubtedly plays a part in the preference for women over visiting male reporters (with the exception of a handful such as Scott Peterson of the Christian Science Monitor and, more recently, Steve Inskeep of National Public Radio. Thomas Erdbrink, a Dutch citizen, is based in Tehran for the New York Times, and Jason Rezian, an Iranian-American, works in Iran for The Washington Post.)

Male officials may assume that women will not ask tough questions, even though that assumption has repeatedly been proven wrong by Iranian as well as foreign journalists. On the other hand, Iranian officials recognize that a handful of American women are truly committed to the story. Plus giving them visas means that officials get to see them struggle to comply with the requirements of Islamic dress.

Last week’s visit was particularly trying in that regard. With temperatures soaring above 105 degrees Fahrenheit (40.5 C), Iran’s law that all women – foreign as well as local — have to cover their hair and most of their bodies was pure torture. Iranian women security guards – who endure summers wearing full black veils known as chadors – kept a group of about a dozen foreign women journalists in a sweltering anteroom for half an hour before allowing entrance to parliament where Rouhani was about to take the oath of office on August 4. Sweat poured down our faces as the guards dallied about matching names with those on a printed roster. Since purses had to be checked, no one could re-apply makeup. Even NBC correspondent Ann Curry’s lipstick was deemed too dangerous to take inside the parliament chamber!

That said, Islamic dress requirements were the most lax I have experienced in nine trips to Iran since 1996. Instead of the once predominant colors — dark grey, dark brown, navy blue and of course, basic black – Islamic cover or hijab now comes in a profusion of bright shades and provocative styles. In addition, the dreaded morals police, who used to harass women whose scarves were too far down on the back of their heads or who showed too much ankle, have been off the streets since Rouhani’s June 14 election.

​​The relaxation of the dress code contributed to a somewhat lighter atmosphere in Tehran. Indeed, the security presence that was so oppressive a year ago – when I attended a summit of the Non-aligned Movement in Tehran – was less obvious on both the streets and in the Evin hotel (the same name as Iran’s notorious political prison) where foreign reporters were obliged to stay. Happily, we checked in and all of us were able to check out!

Average Iranians also were more willing to talk to a foreign reporter and less hesitant about expressing admiration for the United States. While several blamed the U.S. for sanctions — which have halved Iranian oil revenues and reduced the value of the currency by two-thirds, driving up inflation — others were nearly as friendly and welcoming as Iranians used to be toward Americans before the disputed presidential elections of 2009 and the Iranian government crackdown on the so-called Green Movement. One vegetable seller in the poor south Tehran neighborhood of Javadieh, Araz Habibzadeh Ardebil, was particularly effusive, insisting that he be quoted by name and saying “Send my regards to Americans” and “I love Americans.”

Some Iranian academics and columnists affiliated with prior reformist presidents and movements also re-emerged like bears waking up from four, and in some cases, eight years of hibernation. Members of the pre-2005 political elite, they appeared to be relishing their return to the public sphere and said they were hopeful that Rouhani and a largely technocratic new cabinet he has appointed can ease Iran’s international isolation and economic downturn.

At the same time, few ordinary Iranians encountered during brief stops in north, central, south and east Tehran spoke enthusiastically about their new president. Many Tehranis said they had not bothered to vote. Those who did vote for Rouhani said they chose him only because he was the least bad of the six available candidates. As one young saleswoman in the central Tehran neighborhood of Haft-e Tir put it: “The last one [Mahmoud Ahmadinejad] didn’t do anything for us and this one won’t either.”

This prevailing cynicism reflects the fact that ultimate power in the Islamic Republic of Iran lies with Supreme Leader Ayatollah Ali Khamenei and that Rouhani’s leash will be only as long as Khamenei allows. The man and woman-on-the-street comments also demonstrate the lack of popular support for the system as a whole and a sense of frustration that there is little ordinary Iranians can do to change it.

Rouhani, a veteran regime insider partly educated in Scotland, appears to understand the depth of the challenges he faces and how difficult it will be to overcome both domestic and foreign skepticism about his ability to alleviate the multiple crises facing Iran.  He has promised repeatedly since his election to be honest with the Iranian people and stressed that to succeed, he needs the support of all factions and groups – including those who boycotted the elections. For now, Khamenei is urging the political elite to cooperate with Rouhani . The new president must retain the Supreme Leader’s backing while simultaneously reaching out to the international community — no easy feat.

During his first press conference as president on August 6, Rouhani side-stepped questions about whether he would authorize direct talks  with the United States, promising only to respond “appropriately and constructively” to “meaningful, rational measures” by the Barack Obama administration. It was a mirror image of the White House’s own cautious outreach to Rouhani. Each side keeps saying that the ball is in the other’s court.

Still, it felt good to see the back of Ahmadinejad with his insatiable need for attention. Iranian reporters at the press conference seemed liberated by the change and drilled into Rouhani with pointed questions about the economy and human rights. An Iranian academic said he felt a huge burden off his shoulders with Ahmadinejad gone.  At the same time, he gave grudging credit to Iran’s much maligned former president for reducing the influence of the clergy over Iranian society, and trying – however ham-handedly – to promote the interests of ordinary people.

Overall, this trip to Iran confirmed that Iranian society is evolving beyond the ability of any one politician to control. One has only to experience Tehran’s manic traffic to know that Iranians do not like to be told what to do by anyone.