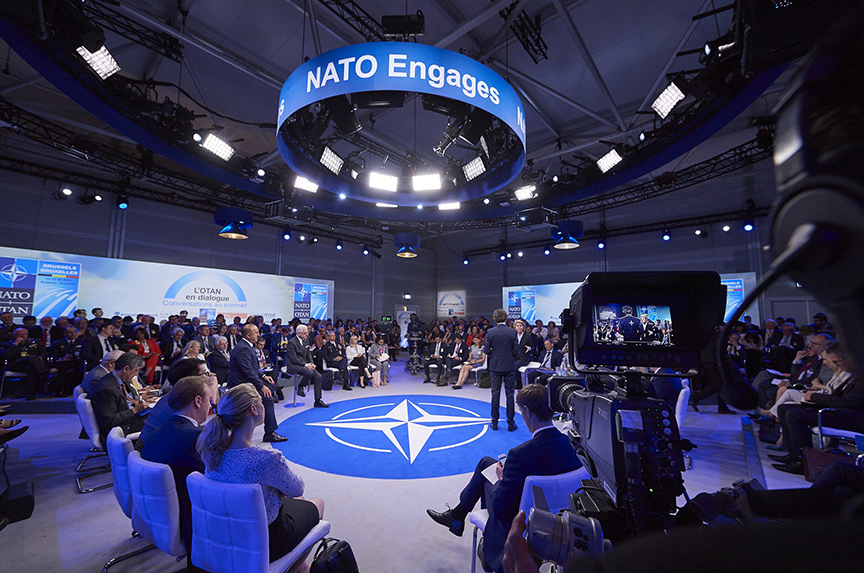 Turkish Foreign Minister Mevlüt Çavuşoğlu, Polish Foreign Minister Jacek Czaputowicz, and German Defense Minister Ursula von der Leyen stressed the importance of unity in the Alliance during a panel discussion in Brussels on July 11. Although each of the ministers implored the Alliance to find common ground on the challenges facing the bloc, divergent views on these central questions also emerged. The ministers participated in NATO Engages, a two-day event co-hosted by the Atlantic Council on the sidelines of the NATO Summit in Brussels.

“At this moment, transatlantic unity is crucial for our security,” Czaputowicz, who took over the post of Poland’s foreign minister earlier this year, said.

Çavuşoğlu, Ankara’s chief diplomat since 2015, agreed, saying “we need solidarity and unity more than ever to face all these kinds of challenges” that NATO is currently facing, from traditional military threats to terrorism and cybersecurity.

Von der Leyen, Germany’s first-ever female defense minister who has served in the role since 2013, warned that NATO’s “opponents would love to see division in NATO. We should not allow that.”

Much attention during the panel was paid to US President Donald J. Trump’s current criticism of European allies for their low levels of defense spending, with Germany often targeted specifically. Von der Leyen conceded that the United States has a valid point, but argued that context is needed. “We came out of a period of twenty-five years of budget cuts,” she said. “At that point Germany was down to 1.1 percent [of GDP spent on defense], now we are rising.”

She declared that the German budget for next year includes a defense-spending rise of 11 percent and projected that by 2024 Germany would have a rise in defense spending in real terms of eighty percent. “Show me another country that can say that,” she added.

Von der Leyen also stressed the need to look not just at raw numbers, but the kinds of contributions NATO members are making. “You can spend 2 percent on your national defense budget without doing anything for NATO,” she said, after noting that Germany has contributed the second-highest number of troops to the Alliance and is the second-largest net payer after the United States.

Despite these qualifications, she stressed that Germany was still committed to working towards the 2 percent of GDP goal set out at the 2014 NATO Summit in Wales.

Although all of the ministers stressed the importance of transatlantic unity and cohesion, several stark divisions were apparent throughout the discussion. After defending Germany’s low levels of defense spending, Von der Leyen pivoted to boasting about the contributions the European Union’s efforts on defense cooperation have made to NATO, especially new initiatives in military mobility.

Addressing potential concerns from the United States and others that EU efforts could duplicate NATO capabilities, the German defense minister reminded the audience that she only has one set of armed forces to deploy on behalf of NATO and the EU, and that she “would be crazy to compete with myself.”

“It is in our utmost interest to be complementary to NATO. We have been asked by our American and Canadian friends to strengthen the European pillar, and that is what we are doing now,” she said.

Czaputowicz, while maintaining that Poland supported many of the EU’s efforts, cautioned against relying too heavily on the initiatives championed by Von der Leyen. “Only the United States can guarantee security for countries like Poland, on the eastern flank,” he said. He explained that Poland and other eastern countries often find themselves caught between the United States and the EU, especially when transatlantic relations become tense over issues such as trade, the Iran nuclear deal, and migration.

The two foreign ministers on the stage, from Turkey and Poland, also had very different views about what the main threat was to NATO, highlighting the diverse array of challenges the Alliance is currently facing.

Çavuşoğlu argued the threat from terrorist organizations in the Middle East and Europe should be NATO’s top priority, while Czaputowicz responded minutes later by saying that “the most important challenge is revisionist states, particularly Russia.”

The divisions became starker from there, as Çavuşoğlu responded to a question from moderator Ali Aslan, a presenter for Deutsche Welle TV, on Turkey’s recent purchase of S-400 missiles from Russia.

Çavuşoğlu maintained that Turkey tried to procure missiles from NATO sources, but was rebuffed. “NATO is able to cover only 30 percent of my airspace. Who is going to protect my nation, my people, from the missiles coming from Syria or any other countries?” he asked. The Turkish minister argued the purchase was necessary after Germany “withdrew” its Patriot missiles from Turkey’s southern border. When Von der Leyen explained that this withdrawal was part of a regular rotation, Çavuşoğlu fired back that Spain and Italy prolonged their planned rotations “like real allies.”

Czaputowicz also directed some criticism at Von der Leyen’s government for the proposed Nord Stream 2 pipeline, which will bring Russian natural gas to Europe through the Baltic Sea. The topic emerged after Trump criticized Germany’s support for the pipeline, citing it as evidence that Germany “is totally controlled by Russia.” Czaputowicz echoed these sentiments, suggesting that Russia used the revenue it gained from the first Nord Stream pipeline to fuel its aggressive actions in Georgia and Ukraine. He argued that “some European countries—Germany—are…not taking into consideration…our security threat” from Russia.

Von der Leyen responded by stating that “if there is a country in the region who has seen the change in Russian behavior…it is Germany.” She also added, however, that leaders “should keep a communication line” between the Alliance and Russia.

Looking ahead to the summit, all of the ministers stressed the need for NATO to adapt for the future and for members to maintain transatlantic unity to keep the Alliance together. As Von der Leyen concluded “it is up to our generation now to renew that [unity], because I want my children in fifty years to live under the security umbrella of NATO in a democracy, and that is worth fighting for.” If the divisions on display on July 11 are any indication, however, achieving that unity will be a tall order.