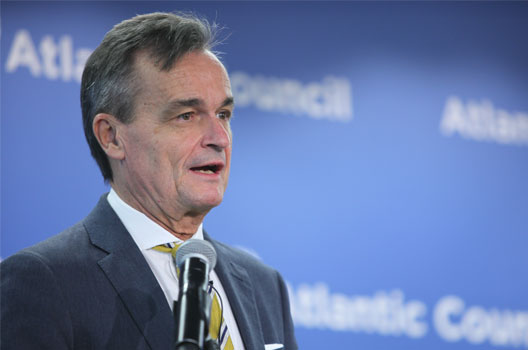 French ambassador to the United States, Gérard Araud, sees ‘a very dark moment’ for his country

France, a victim of terrorist attacks for the past nineteen months, is facing its greatest security challenge since World War II, according to Gérard Araud, France’s ambassador to the United States.

“It is a very, very dark moment for my country,” said Araud. “It is obviously the biggest threat that France really has been facing since 1945.”

France has been attacked multiple times since January of 2015 when an assault on the satirical publication Charlie Hebdo in Paris and a Jewish deli left seventeen people dead.

The deadliest of the attacks took place in Paris on November 13, 2015, when 130 people were killed in coordinated strikes on the Bataclan concert hall, stadium, and cafes and restaurants in and around the French capital. On July 14, a lone attacker rammed a cargo truck into a crowd celebrating Bastille Day in Nice killing eighty-four people; and on July 26, two men murdered a Catholic priest and grievously wounded one of his parishioners at a church in Normandy, France. The Islamic State of Iraq and al-Sham (ISIS) has been blamed for these three attacks. The country-wide state of emergency, which was imposed by French President François Hollande following the attacks in Paris, was extended following the attack in Nice.

Mandeville noted that the public mood in France has transformed from patriotism following the Charlie Hebdo attacks to one of anger and doubt—following the Nice attack—about the capacity of the government and security services to contain these terrorist threats.

“We are faced with an enemy which is within our walls,” said Mandeville. “We have seen a palpable process of radicalization of people from very different backgrounds who suddenly turn to these awful terrorist attacks. It is an absolutely huge challenge.”

She described the murder of the Catholic priest in Normandy as a watershed moment. “It shows that the people we are dealing with—the radical Islamists—want to wage a war of civilization and a war of religion against us. We can say we are not in a war on religion, but they think we are,” she said. “What is going to be the answer to that?”

Mandeville suggested that it is a question of identity, and not so much socio-economic integration, that lies at the heart of the challenge facing European society today.

Araud took exception to this suggestion—calling the identity debate an “artificial and toxic” trap laid by the far-right. Through this frame of identity, “they want to define me as a Christian. They want to define my neighbor as a Muslim. Actually no, we are both threatened in the same way,” he contended.

Most of the terrorists who have attacked Europe were not devout Muslims, he noted.

France has become a prime terrorist target for certain reasons, according to Araud. France, a former colonial power, is seen as a symbol of the West and Western values in many parts of North Africa and the Middle East; the Muslim community in France, predominantly of Arab origin, is vulnerable to ISIS propaganda; and France has been at the forefront in the war on jihadists, including in Mali and as part of the US-led anti-ISIS coalition in Iraq, he said.

In a June 23 referendum, the British public voted in favor of taking the United Kingdom out of the European Union. David Cameron, who had promised in 2013 that such a referendum be held, resigned as prime minister of the UK leaving his successor, Theresa May, to negotiate the so-called Brexit. This process could take up to two years once May informs the European Council of her country’s decision to leave the EU, thereby triggering Article 50 of the Lisbon Treaty, which governs the EU exit process.

A looming Brexit poses a challenge to France. “Brexit, for us, has a lot of consequences,” said Araud.

The ambassador said the EU’s other twenty-seven member states have no intention of punishing the UK for its decision to leave the bloc. “It doesn’t make any sense,” he said. He acknowledged moments of anger and resentment in Europe following the referendum, but said that “after the dust settles, the reality will be that we need to maintain a close and friendly relationship with the United Kingdom.”

The UK and France are already bound together in a defense relationship by the Lancaster House Agreement. Both nations are also part of NATO. “In political terms and economic terms, it is also in our mutual interests to keep a close relationship with the United Kingdom,” said Araud.

The ambassador said Brexit negotiations, which he predicted may turn acrimonious because vital interests are at stake, must respect the interests of all parties concerned as well as safeguard the four pillars of the European single market—the free movement of goods, capital, services, and people. The UK seeks to retain access to the European single market. The conditions under which the EU has agreed to grant such access to nonmember states, like Norway, include the right to free movement of workers. The UK wants to control the movement of people from the EU to the UK—a sentiment that was reflected in the outcome of the Brexit vote.

The outcome of the British referendum has raised questions about EU unity and heightens the risk of the bloc unraveling at a critical moment for Europe. The leaders of both France and Germany are up for re-election in 2017, and the EU’s future will be a central point of debate in the respective campaigns.

Western democracies are also witnessing what Araud described as an “outburst of populism” that has fed off the anti-EU sentiment. In France, this is manifested in the rise of the far-right, anti-immigrant National Front, led by Marine Le Pen.

Furthermore, France, like much of Europe, is only just limping out of the financial crisis of 2008. “We have to convince [the people] that the European Union is actually contributing to prosperity and is not limited to a sort of austerity straitjacket,” said Araud.

“We are facing a rebellion against globalization,” he said. “Globalization has been very good for the poor in the third world and for the rich in the first world. But the problem is, of course, that democracy is based on the prosperity, the well-being, and the optimism of the middle class.”

The war in Syria

France, a US ally that “combines strategic outlook, political will, military capabilities, and economic heft is poised to play a critical role in shaping Europe’s future, both in terms of growth and in terms of security,” Damon Wilson, executive vice president for programs and strategy at the Atlantic Council, said in opening remarks.

Europe today faces challenges on its east—from a revanchist Russia—and its south—from conflicts that have driven historic numbers of migrants north into the Continent. Over the past few years, Europe has seen the largest movement of people since World War II. A majority of them are fleeing wars in Syria, Iraq, and Afghanistan.

Hof described Syria as the epicenter of the crisis facing Europe and said it was important to address the twin problems of protecting civilians in Syria and defeating ISIS in its Syrian capital, Raqqa.

Araud said Russia’s intervention on the side of Syrian President Bashar al-Assad had limited Western options for creating a safe zone for the protection of civilians in Syria. “I don’t see the Americans or the Europeans risking a major incident with the Russians,” said Araud.

Earlier in July, the European Union extended sanctions on Russia that were originally imposed following Russia’s annexation of Crimea in March of 2014 and the country’s support for separatists in eastern Ukraine.

“It is absolutely essential that sanctions be maintained unless the Kremlin begins to step back from its aggression in eastern Ukraine, and that is not happening,” said Herbst. “This is the silent war that people do not pay attention to.”

Prominent voices in Europe that want to appease Russia should be discarded, said Herbst.

However, Araud contended that Europeans, who traded significantly more with Russia than the United States, are suffering as a result of the sanctions on and from Russia. “The sanctions are an instrument, they are not an end in themselves,” he said. “We are not going to keep the sanctions for the next twenty years.”

Some countries are now questioning the efficacy of the sanctions, which are reviewed every six months and can only be imposed through a unanimous consent of all twenty-eight members of the EU. “There will be a moment when some European countries will tell us, ‘Sorry, but your sanctions don’t work and they hurt us, so we have to find something else,’” said Araud.

Image: “The sanctions [on Russia] are an instrument, they are not an end in themselves,” Gérard Araud, France’s ambassador to the United States, said at the Atlantic Council on July 28. “We are not going to keep the sanctions for the next twenty years,” he added. (Atlantic Council/Victoria Langton)