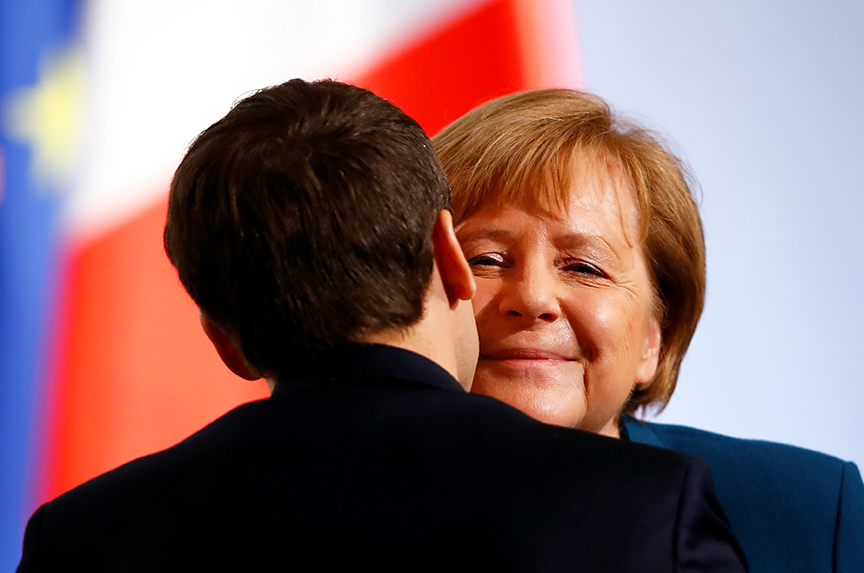 The new Treaty of Aachen, signed on January 22 by French President Emmanuel Macron and German Chancellor Angela Merkel bears great symbolic significance—historical as well as political. The question is whether it carries much practical significance.

On Christmas Day in the year 800 AD, Charlemagne was crowned by Pope Leo III in Rome as the first emperor of the Holy Roman Empire. Despite Voltaire’s quip in 1756 that this construction was neither holy, nor Roman, nor an empire, the Sacrum Imperium Romanum was to last until it was dissolved in 1806 during the Napoleonic Wars. Even today, the prince of Liechtenstein is a direct inheritor of one of the principalities composing the Holy Roman Empire.

The capital of the empire was Aachen, known in French (and generally in English) as Aix-la-Chapelle. Charlemagne had become King of the Franks in 768 AD, upon the death of his father, Pepin the Short, and, as his father had done before him, he spent Christmas that year in Aachen. Later, and until Charlemagne’s death in 814 AD, Aachen became Charlemagne’s “capital,” the political center of his empire and the location of his imperial court.

During his reign, the Palatine Chapel was built, giving the source of the French name Aix-la-Chapelle. In the twentieth century, the chapel was elevated to the status of a cathedral.

During the 500 years following Charlemagne, most of the emperors of the Holy Roman Empire were crowned in Aachen.

Today, the Charlemagne Prize is awarded annually in Aachen for an individual’s contribution to the work of European unification: in 2008 it was awarded to Merkel and in 2018 to Macron.

So the selection of Aachen, or Aix-la-Chapelle, as the location to sign a new treaty of French-German friendship and cooperation, on the 56th anniversary of the Élysée Treaty, signed by Charles de Gaulle and Konrad Adenauer, could not be more symbolic.

The Élysée Treaty is a short document, limited in scope. It instituted regular meetings between French and German cabinet ministers and senior military officers; enshrined agreement by both countries’ governments to coordinate their foreign policies; called for parallel French and German military doctrines and operations; and, most importantly, established programs in the realm of education and youth, which have proved spectacularly successful in the teaching of each other’s language and culture and the creation of personal friendships and lifelong ties between French and German people who first met as young students.

Today, there is immense respect in both countries for the people, values, and reliability of each other as allies and standard-bearers of the European ideal.

The new Treaty of Aachen, pretty well twice the length of the original Élysée Treaty, pledges enhanced cooperation between France and Germany on European policies; reaffirms their foreign policy, security, and military cooperation; underscores their commitment to culture, education, and research, all to be more thoroughly coordinated together; and, perhaps most importantly, ushers in new initiatives on cross-border cooperation, particularly as regards people who live in one country and work in the other. The treaty envisages increased economic and environmental cooperation, with the aim of creating “a French-German economic area using common rules” and a French-German Economic and Financial Council to encourage bilateral alignment of their business and financial legislation. The treaty institutes a series of new committees, commissions, and councils.

The text of the treaty was published only days before the signing, which had been announced in advance, leaving open considerable room for scaremongering and conspiracy theories. Far-right and far-left politicians in France seized upon this treaty to propagate fake news: that France was going to sell out Alsace and Lorraine to Germany, or that France was making a new commitment of mutual security to come to the aid of Germany (and vice versa) if ever attacked, which has been covered by Article 5 of NATO since 1949 and by Article 42 of the Treaty on European Union since 1992. Some suggested that France was getting ready to give up its permanent United Nations Security Council seat to Germany, which is not only impossible under UN rules, but not France’s intention at all: the treaty only states that it is “a priority of Franco-German diplomacy [undefined]” that Germany should achieve admission as a permanent member of the Security Council.

None of the provisions of the new Aachen Treaty involves radical new measures and some, however vague, such as the French-German economic area, seem completely fanciful unless France manages to reform and revive its economy—and education system—to reach a German level.

Even though it is largely a symbol, however, the treaty has value for three reasons:

First, it is a statement of intent. As such, it legally binds both France and Germany to pursue further integration, policy coordination, and cooperation. This is better than just drifting along. Despite a lack of concrete applications, the treaty sets out a way forward that will bind future French and German governments.

Second, it sends a signal that France and Germany are serious about the preservation of the European ideal, pooling of sovereignty, and the postwar international order. Again, this is better than the contrary even if there is not much bite to their bark at this stage.

Third, it provides, on a very soft basis, a form of non-coercive leadership within the European Union. As a statement of principles and values, it counters both the populist or nationalist trends in Italy, Hungary, the Czech Republic and Poland—as well as those same trends beyond Europe, in the United States, Brazil, and the Philippines, for instance.

The signing of the treaty has produced some favorable commentaries on both sides of the Rhine and, in the British press and on British television, for example, a realization that while the Brexit fiasco is consuming Britain, the two major founders of modern Europe are carrying on regardless. Looked at from that point of view, the symbolism has substance.

Image: German Chancellor Angela Merkel and French President Emmanuel Macron hugged at the signing ceremony for a new agreement on bilateral cooperation and integration, known as Treaty of Aachen, in Aachen, Germany, on January 22. (Reuters/Wolfgang Rattay)