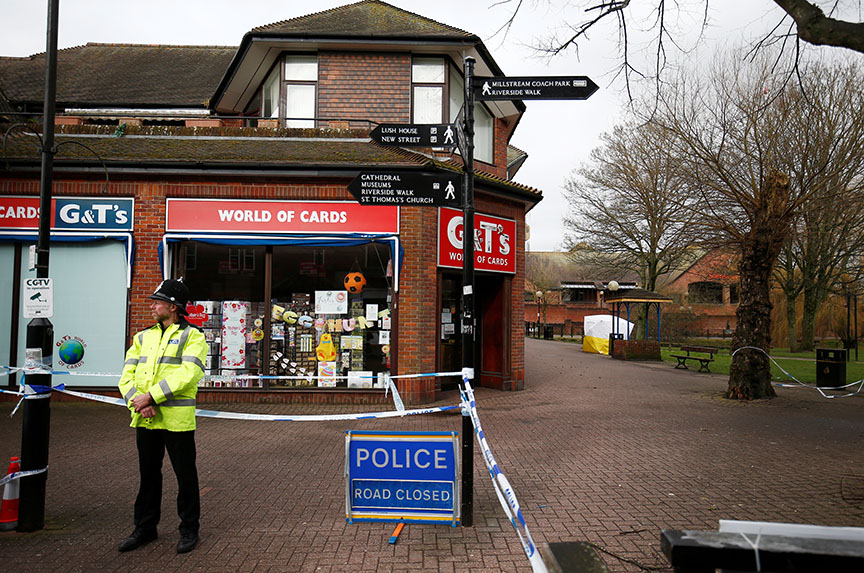 The poisoning of former double agent Sergei Skripal, his daughter, and twenty-one other British citizens in Salisbury is the most recent of too many such examples.

On March 12, days after the attempted assassination of Skripal, Nikolai Glushkov, a critic of Russian President Vladimir Putin, was found dead under mysterious circumstances in his home in London.

British Prime Minister Theresa May has accused Russia of using military-grade Novichok nerve agent in the attack on Skripal. She has also demanded an accounting by the Russian ambassador to the United Kingdom as to whether this was a state-sponsored effort (which it almost certainly was) or worse, if Putin has lost control of his own agents.

However May ultimately decides to respond to the attempted assassination of Skripal, this attack represents an unlawful use of force against the United Kingdom and its citizens.  It also means that Russia attacked a member of NATO and the European Union (EU).

Russia has poisoned “enemies of the state” in the United Kingdom before. Alexander Litvinenko, a former Russian spy, was murdered in London in November 2006. The radioactive polonium-210 that caused his was death was reportedly added to his cup of tea. A public inquiry concluded that Putin probably approved the assassination.

The United Kingdom has now reopened investigations into fourteen other mysterious deaths, including those of Russian tycoon Boris Berezovsky and whistleblower Alexander Perepilichny. Glushkov, who was found dead in London on March 12, was close friends with Berezovsky.

The apparent murder of Mikhail Lesin, Putin’s former media czar, in Washington in 2016 is another example of Russia silencing “traitors.” Former KGB agent, Boris Karpichkov, has claimed that he and at least eight other people have also been targets of Russian attacks and are on a Russian “hit list.”

The attempted assassination of Skripal and the fact that twenty-one other British civilians were exposed to a nerve agent that was procured from a military facility represents an example of chemical warfare and terrorism perpetrated by Russia in the United Kingdom.

Analysts apparently still cannot understand why Russia would try to kill Skripal. This failure to understand underscores the continuing Western incapacity to grasp Putin’s and Russia’s modus operandi and motives.

As James Sherr and John Lough of Chatham House observe, Moscow need not have a formal reason to make such an attack even if it wanted to teach “traitors” a lesson they will never forget,  but it always has its own self-generated incentive and legal authorization to kill enemies abroad.

The scale of the attack on Skripal and the fact that it apparently occurred at one or more restaurants in  Salisbury suggests that this was also what Russian security services call a “Razvedka Boem”—a military intelligence probe. The probe was to ascertain, if not demonstrate, just how weak the United Kingdom’s response will be to Russian aggression. Moscow intends to send a message to the West that it can strike in its territory with impunity.

Moscow has seen nothing but British weakness in the face of its provocations going back over a decade to Litvinenko’s murder. At least twenty other deaths or attempted murders in the United Kingdom have hitherto evoked no visible retribution for Russia.

We have seen heightened aggression from Russia. Norway recently reported three military probes against it near the Arctic in 2017—a region that is supposedly a model of Russo-Western political dialogue not military threats.

In Syria, Moscow uses terror tactics against civilians in its support for Bashar al-Assad’s regime. It sent a private army to exploit Syrian energy assets and abet its military campaign for Assad.  It then authorized this private army—the so-called Wagner army—to attack US forces which it knew to be in the area and who had apparently warned Moscow of their presence.  The result was a “turkey shoot” with possibly 300 or more Russian fatalities. Typically, Moscow remained silent until enterprising foreign journalists broke the story.

In Ukraine, Russian forces have attempted to conduct terror bombings in Kyiv as they have already done in Odessa and Khar’kiv.  Moscow is also steadily upgrading its forces that have invaded Ukraine. It has fully assimilated the so-called separatists into the Russian army, created two whole new armies on Ukraine’s border, deployed nuclear-capable missiles in Crimea, and deployed nuclear missile versions of its sea-launched Kalibr cruise missile to the Black Sea.

Russia has also intervened in elections in the United States and Europe over the past two years and continues to attack the integrity of the US political system.

It has replied to a Stockholm arbitration court decision in favor of Ukraine by unilaterally terminating all energy contracts with Kyiv, in mid-winter, confirming that Russia still views energy as a political weapon.

Meanwhile, Russia continues its overflights of the United States’ European allies and Japan, and it is concurrently building a network of naval bases and facilities across the Mediterranean Sea and into the Sahel and Persian Gulf.

Lastly, there is Putin’s speech of March 1 to the Federal Assembly. In that address, the Russian president unveiled six new nuclear weapons, including weapons whose sole purpose is to inflict maximum civilian casualties.  The purpose here, in classic mafia style, was to intimidate foreign audiences.  But Putin omitted the almost twenty other Russian nuclear programs currently underway that violate virtually every existing arms control treaty.  The video that accompanied his speech showed Russian capabilities that openly violate the Intermediate-Range Nuclear Forces (INF) treaty.  If these actions do not constitute a war against the West and international order as such then it is difficult to imagine what would represent such a war.

Incontrovertibly, Russia is not only at war with the West, it is a state sponsor of terrorism in Ukraine and in the Middle East where it is the principal supplier of weapons to Hezbollah and supports Hamas—both groups that have ties to Iran.

Russia is an outlaw state whose modes of governance resemble those of the mafia.  This is not a new development. Putin’s KGB used to joke that its initials did not stand for Committee on State Security but rather meant the Office of Wild Bandits (Kontora Grubykh Banditov).  Clearly not much has changed for them.

In the late 1980s, Giulietto Chiesa, the Moscow correspondent of the Italian Communist Party newspaper L’Unità, observed that the USSR was governed according to the rules of the Italian Mafia. This clearly continues to be the case in Putin’s Russia.

The fact that Moscow arrogates to itself the right not only to kill its self-anointed traitors abroad but also to wage chemical war on foreigners confirms the fact that its diplomats and officials respect neither sovereignty nor territorial integrity of other states.

Spanish prosecutor José Grinda, in his monumental investigation of Russian organized crime, found that those crime syndicates are essentially extensions of the Russian state.

Consequently, Moscow needs no real motive for attacks like those undertaken in Salisbury.  The real question is not why Moscow did it, but what it will take for the West to recognize what we are up against? The West must take resolute, but relatively easily available, actions that are necessary to defend democracy, the rule of law, and legal order in the face of this unrelenting attack by what amounts to a criminal syndicate that has morphed into a state.

Image: A police officer in Salisbury, England, stood on March 11 near a cordon around the bench where former Russian intelligence agent Sergei Skripal and his daughter, Yulia, were found after they were poisoned. (Reuters/Henry Nicholls)